On the ‘Front Line’ of the Jesus Movement 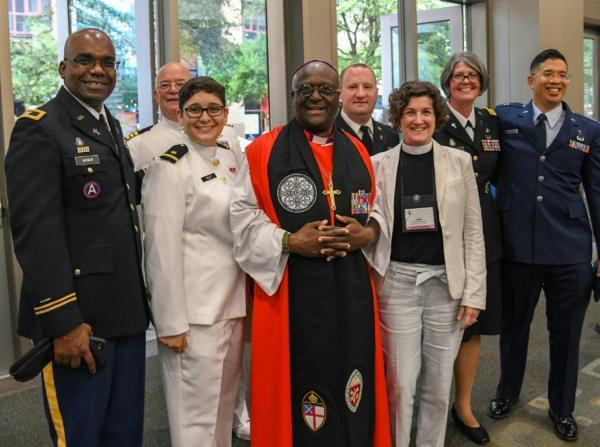 [Episcopal News Service – Austin, Texas] Ask the Rt. Rev. Carl W. Wright, bishop suffragan for the Armed Forces and Federal Ministries, about the military chaplains he shepherds, and he will tell you, “Our chaplains are on the front lines of the Jesus Movement – we are the original missionaries!”

Wright served as a chaplain in the Air Force for 20 years. Now he heads the office that oversees chaplaincy programs for all branches of the military (active, reserve and National Guard), veterans hospitals, federal prisons, Civil Air Patrol, and the chaplain candidate program, as well as the Distinguished Faith Group Leader program for lay and ordained ministry. 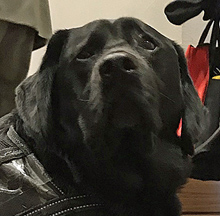 The black Labrador retriever seen padding around the 79th General Convention was trained as a PTSD service dog by a male inmate in the Puppies Behind Bars program. In 2014 Zac joined Chaplain Maj. Andrea Baker’s chaplain ministry in Afghanistan and is now “as much a chaplain to me as I am to others.” Zac’s presence “facilitates conversations,” said Baker, and helps her recharge.

While Zac is Baker’s partner in ministry, it is his namesake’s story that bears witness. Airman 1st Class Zachary Cuddeback, 21, was killed in action in Germany in 2011. Baker named her partner Zac in Cuddeback’s honor. In 2017 Baker was stationed at U.S. Army Garrison Stuttgart, Germany, when she and dog Zac met Robert Cuddeback at the annual run for Zac at Ramstein Air Base. There’s more. Baker was called upon to perform the dignified transfer of remains, which is done at the airplane on the airstrip. The bus that took Baker to the plane was named for Zac Cuddeback.

Chaplain Maj. Andrea Baker, a priest and chaplain recruiter for the U.S. Army said, “This military is a diverse environment and ultimately it’s an environment in which you have to have implicit trust in one another. Even if you disagree with someone’s opinion, you still trust they have your back. It’s a great place to be an Episcopal priest.”

The work chaplains do is highly valued and an integral part of military life. Col. Vicki Wyan, U.S. Army, retired, served for 40 years in both active and reserve units. “All the chaplains I ever met, whether in theater or stateside, were people dedicated to serving the needs of those who serve,” Wyan said. “So much of what they do is intangible; it helps those who are doing the heavy lifting – the soldiers, officers and their families – through the day-to-day life of being in the service.”

Baker agrees that chaplains, much like those in military medical and dental units, serve a critical supporting role. “You can be a pacifist [and be a chaplain]. We do not carry weapons. I can do this ethically because we need service members who are grounded and who have the support they need when they need it.” Baker explained that chaplains are part of a Unit Ministry Team; they do not work alone. In the Army the chaplain works with a Religious Affairs Specialist or non-commissioned officer who is the “soldier.”

Navy chaplain William Alford, who also serves as rector of St. James’ Church, Parkton, Maryland, says that becoming a chaplain was a life-long ambition. “I finally got to the place where all the stars aligned, and the governor of Ohio gave me a waiver so I could serve [in the Navy] again,” Alford said. “The interaction with ships’ personnel is rewarding. A chaplain’s mission is fairly similar to that of a parish priest in that sailors and officers have issues the same as parishioners,” Alford said.

Being a rector and a chaplain offers the opportunity to raise awareness of the ministry. Chaplain Paul Minor is a member of the Massachusetts National Guard and co-rector of All Saints’ Church, Belmont, Massachusetts. Minor said, “I show up in my dress uniform at diocesan convention to remind people that we have chaplains doing this work. Some people like it; some people struggle with it. There are a lot of similarities in both worlds and I enjoy them both.”

An Air Force chaplain recruiter stationed at Randolph Air Force Base, San Antonio, Chaplain Hank Hahn has a directive from the chief of chaplains to “pay attention to denominations like the Episcopal Church that are underrepresented in the Air Force Chaplain Corps.” Hahn is a Presbyterian priest who “has been to lots of General Conventions, and this one has been very impressive. Everyone is warm and fun-loving; it’s been a great time.”

Baker says that the Army is also seeking diversity in its Chaplains Corps. Mandates such as the “combat exclusion policy,” which allows for women to serve in every capacity, increases the need for representation of women in the corps. Only a “handful” of women chaplains currently serve in the Army.

A 2011 graduate of Church Divinity School of the Pacific, Baker has attended the 79thGeneral Convention with “associate chaplain” Zac, her trained PTSD service dog, representing the Army. As part of her work Baker attends conventions and meetings of religious faiths and traditions across the spectrum, with the exception of Roman Catholic and Orthodox orders that are recruited by other recruiting stations. Building community partnerships with seminaries and meeting with bishops raise awareness of the need for chaplains.

The first step in the process in becoming a military chaplain is for the priest to meet with a chaplain recruiter from the desired branch of service. Seminarians are encouraged to apply as well, although in most cases two years of post-seminary experience in a congregational setting is required. The candidate must be endorsed by their bishop and the bishop of the armed forces and federal ministries to be granted the title “chaplain.” The background checks and vetting process are extensive and the candidate needs to be physically fit.

Being a military chaplain is a calling to serve those who serve.  “It’s a ministry of presence,” Baker said. “I meet amazing people and travel to some amazing places. I think it’s the coolest ministry there is.”

– Sharon Tillman is a freelance writer for Episcopal News Service.