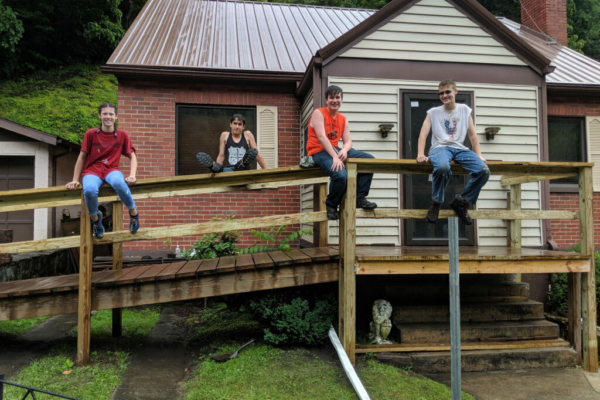 Members of a youth group from All Saints Episcopal Church in Hershey, Pennsylvania, pose for a photo on the wheelchair ramp they built this month at a home in Keystone, West Virginia. Photo: Susan Claytor

[Episcopal News Service] An Episcopal ministry in West Virginia that dates back more than 70 years is undergoing a rejuvenation as organizers expand its range of outreach efforts to serve residents of McDowell County, one of the poorest counties in the United States.

The ministry, Highland Educational Project, has been busy in June welcoming work groups. All Saints Episcopal Church in Hershey, Pennsylvania, sent a youth group last week to complete a handful of home repair projects in the county. Another Pennsylvania congregation, St. Paul’s Episcopal Church in Mt. Lebanon, spent time this month volunteering with a local food bank, and residents from Boys Home of Virginia, an Episcopal boarding school in Covington, traveled to McDowell County to help with food distribution.

“It’s a chance to change another human being’s life, but also a chance to even enrich your own,” said Mary Green, who doubles as the Diocese of West Virginia’s communications coordinator and the interim director of the Highland Educational Project.

If you or your group are interest in volunteering, contact Mary Green at mgreen@wvdiocese.org or 304-545-7666.

The ministry and its visiting work groups have long served the needs of the remote Appalachian hill communities of McDowell County, which dips to the southernmost point in West Virginia. Highland Educational Project once was “the only full-time mission-based organization that was open to provide area residents with aid every day of the week,” the diocese says on its website, and that aid included food, clothing, help with utility bills and other basic assistance.

Such efforts had stalled in recent years, culminating in a temporary closure of Highland Educational Project last year amid a leadership transition. Since Green took the helm in April as interim director, the ministry has renewed ties with local partner organizations, and Green has developed a growing slate of activities around the project’s core ministry areas: spiritual, educational, environmental and personal wellbeing.

A huge thank you to the @wadecenter in Bluefield for allowing us to support their student programs!

A post shared by Highland Education Project (@highlandeducationalproject) on Jun 21, 2019 at 8:46am PDT

The work groups’ efforts fall into the environmental category. Green coordinated with the McDowell County Commission on Aging and the county’s school district to identify residents in need of home repairs, and one of the project’s longtime volunteers, the Rev. Susan Claytor, helped evaluate potential projects for safety and viability.

Claytor has been involved with Highland Educational Project since the early 1990s, when she was a youth minister in Florida. Until recently, she served as rector at All Saints Episcopal Church in Hershey, and she helped facilitate the All Saints youth group’s trip last week to McDowell County.

In March, Claytor took over as rector at St. Stephen’s Episcopal Church in Beckley, West Virginia, which is a little over an hour’s drive from the Highland Educational Project center in Welch. One of her future goals is to schedule day trips with members of her congregation to complete service projects for McDowell County residents.

“Every hour we spend there, telling them the outside world cares, is so powerful,” Claytor said in an interview with Episcopal News Service.

McDowell County, with a declining population of about 20,000 people, is positioned on the Virginia state line and just east of Kentucky. It is a region of Appalachia that once rode the fortunes of the mining industry, but now, after years of coal mine closures, it is struggling with unemployment, drug addiction, water quality issues, deteriorating homes and failing infrastructure. About 35 percent of county residents lived in poverty in 2017, according to census data, and median household income was less than $26,000.

“To see where it is now, it’s saddening,” Green told ENS. “But there’s such a resilience, and the people … they’re proud of where they’re from, if we could just make a difference in their life.”

The Highland Educational Project’s mission, then, is based on the belief that residents here deserve things like clean water, a quality education for their children, good-paying jobs and homes with roofs that don’t leak, Green said. Other organizations active in the county already are providing for some such needs, and the Diocese of West Virginia wants to partner with them without duplicating services.

At the same time, Green sees the Diocese of West Virginia as well equipped to mobilize resources to address needs that aren’t being met. Highland Educational Project, for example, will host a reading camp this summer for third, fourth and fifth graders – one simple step toward boosting the county’s low literacy rates. The ministry also is partnering with a local hospital to give the parents of all newborns in McDowell County a bag with a blanket and tips for keeping their babies safe and for helping them grow.

Highland Educational Project also is offering its center in Welch for free as a site for residents to schedule reunions, baby showers, birthday parties and other gatherings, because few such venues exist, Green said. Other outreach opportunities include sports programs for young people, providing recreational opportunities and alternatives to drug use. Green, meanwhile, is reaching out to ecumenical partners in the area to discuss ways to offer spiritual enrichment.

“If we could give two messages through our work and through our interaction in the community it’s that you’re cared about and you deserve to have better,” Green said. She is based in Charleston but drives to McDowell County at least once a week.

Home repairs are among the most visible outreach projects in McDowell County and also among the most fulfilling for the volunteers who travel many miles to participate.

“Young people love hammers and nails,” Claytor said, and these projects resonate more deeply with the youth groups she leads. Participants often ask to return again and again. “They’re attached to the area. They’ve really grown to care for the people.”

The team from her former church in Hershey included a dozen youths and four adult chaperones, and despite the rain last week, they were able to complete five projects, from building a wheelchair ramp for a house in Keystone to repainting the city’s rusted water tank.

Claytor leads two congregations in Beckley. In addition to serving as rector at St. Stephen’s, she is pastor of St. Luke’s Lutheran Church. She said she plans to help spread the word around her Episcopal diocese and Lutheran synod that work groups are needed in McDowell County.

“I’ve always believed in mission trips, because the young people think that they’re going to improve someone else’s lives,” she said. “What they’re really doing is growing.”