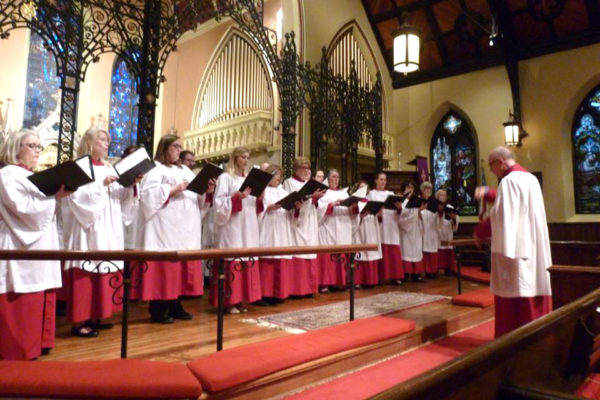 [Episcopal News Service] An Episcopal church’s century-old tradition of playing secret Santa for West Virginia children has received national recognition, including a mention this week by the White House.

St. Matthew’s Episcopal Church in Wheeling, West Virginia, made local headlines after it paid the Walmart layaway balances on toys for several families in its community. The congregation had intended to remain anonymous, but word got out after news of the donations spread on social media.

“It’s just such a blessing and I don’t know if words can really describe how grateful we are and so very happy that someone would do something like this,” Nathan Robinson, whose family was one of those benefiting from the layaway payoffs, told WTRF-TV.

The Rev. Mark Seitz, rector at St. Matthew’s, said the tradition is rooted in the grief of a local family who lost a daughter to illness more than 100 years ago. They gave the church an endowment in their daughter’s memory to be used each year to brighten the season for families in need.

“The criteria for this was that the people had to be residents of Ohio County, either Wheeling or Triadelphia, and they needed to have children,” Seitz told WTRF-TV. “They needed to be buying toys.”

The church paid off about $5,000 in layaway balances in late November, helping several families who live in the area. About 50 accounts were paid off by the church, a Walmart store manager told The Intelligencer and Wheeling News-Register, which added that a White House representative reached out to Seitz on Dec. 5 for more information.

“St. Matthew’s Church wasn’t looking for credit and neither are so many others,” Sanders said. “But these stories are important because they remind us what this season is all about, and that’s the greatest gift of all, that a savior was born, and hopefully we can all focus and take time out of our busy schedules to enjoy the Christmas season or however you may celebrate.”

The church pays for the toys each year with interest on an endowment initially established by U.S. Sen. Nathan Scott and his wife in memory of their daughter, Daisy, the Intelligencer and Wheeling News-Register reported. Scott, a prominent local businessman, represented West Virginia as a Republican from 1899 to 1911.