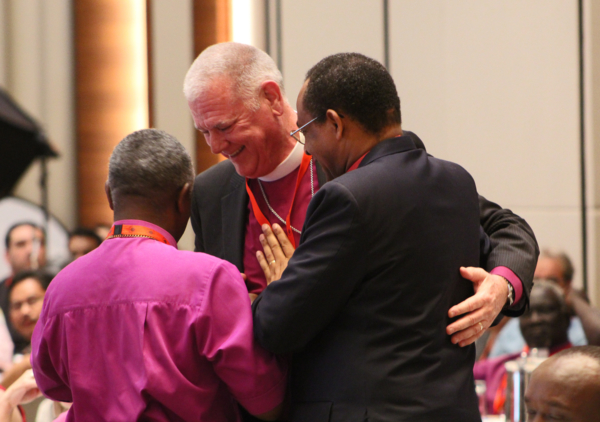 Oklahoma Bishop Ed Konieczny is embraced May 4 by Burundian Bishop Eraste Bigirimana, right, and Diocese of Nairobi Bishop Joel Waweru, both of whom opposed a resolution he proposed. Both participated in crafting a compromise that the Anglican Consultative Council unanimously passed. Photo: Paul Feheley/Anglican Communion News Service

[Episcopal News Service — Hong Kong] Archbishop of Canterbury Justin Welby, working with others, preserved the unity of the 17th meeting of the Anglican Consultative Council on May 4 by apologizing for his 2020 Lambeth Conference decisions about bishops in same-sex relationships and agreeing to renew the communion’s 21-year-old promise to listen to the experiences of LGBTQ people.

“I ask your forgiveness where I made mistakes,” Welby said.

The April 28-May 5 meeting came close to breaking down during the afternoon of its last business day, not over the Lambeth Conference, but over the larger issue of how much the council ought to say about the full inclusion of LGBTQ people in the life of the church.

The conflict arose via Oklahoma Bishop Ed Konieczny’s resolution calling on the communion’s Standing Committee to gather information about the provinces’ efforts to listen to people “who have been marginalized due to their human sexuality within the church, society and their respective cultures.”

The members did not object to that work. However, a number of them refused to accept the resolution’s preamble, which would have reaffirmed “the respect and dignity of persons as Children of God who have been marginalized due to their human sexuality” and state that “they should be fully included in the life of the Anglican Communion.”

The frank but polite debate over the resolution, the intense negotiations that took place during breaks in that debate and the ensuing completely rewritten resolution proved that “in the end, the love of Christ showed through,” Konieczny told Episcopal News Service after the meeting. “We showed that we’re able to have conversation and we’re able to understand one another and that we’re able to compromise.”

“Maybe what little bit of what we did here can be an example for the larger communion and, for those who chose to stay away, that maybe in some way this will help them at least think about coming back.”

Nigeria, Rwanda and Uganda did not send members to the ACC-17 meeting. Some bishops have said they will not attend the Lambeth Conference because they object to the theological stances of other bishops and provinces.

The entire ACC was gracious during the nearly three hours of debate and negotiation, said Rosalie Ballentine of the Diocese of the Virgin Islands, The Episcopal Church’s lay member.

“It does show that we can disagree in a loving way,” she said. “Some of us in The Episcopal Church sometimes need to learn to step back and realize that it’s really supposed to be about Jesus, about God, about how we walk in faith, as opposed to getting our way. A lot of that was demonstrated today.”

The members debated the nuances of being “included” or “welcomed,” and whether the understanding of either word changed when translated into other languages.

Konieczny accepted the amendment to move the resolution forward and it passed 38-20, with 17 abstentions.

During the ensuing debate on the resolution, Sudanese Archbishop Ezekiel Kondo said that in his majority-Muslim country “tomorrow the church will be closed” if the ACC agreed to the resolution. “If we pass this resolution, we are sending a very wrong signal” to the church and the world, he said.

Bishop Eraste Bigirimana, from the Burundian Diocese of Bujumbura, said the communion has been divided since Anglicans formally began talking about sexuality at the 1998 Lambeth Conference. The division, he said, comes because not all believe that “the Bible is very clear: fornication is a sin, adultery is a sin, homosexuality is a sin for the Christian.” Bigirimana said “the Bible has to be our reference.”

Diocese of Nairobi Bishop Joel Waweru opposed the resolution because it “sets doctrine,” something the ACC does not do. He said ACC members “have not had any time to discuss issues of human sexuality,” but were now being asked to vote on a resolution about it. And, Waweru argued, the resolution ought to be expanded to include people who have suffered discrimination for any reason.

“As one coming from the global south,” the bishop said he agreed with others who worried that passing the resolution would give fodder to conservative Anglicans, prompting even more of them to boycott the 2020 Lambeth Conference.

Canadian Diocese of Edmonton Bishop Jane Alexander told her colleagues that the ACC resolution simply reminded the church about the yet-unfulfilled commitment the 1998 Lambeth Conference made via Resolution 1.10 to listen to LGBTQ people.

If the ACC cannot reaffirm the respect and dignity of those who have been marginalized due to their human sexuality, she said, “then my heart is broken and we’ve broken our Baptismal Covenant,” and “we didn’t mean a word” of a Code of Conduct, which members passed at the start of the meeting that contains a similar statement.

Near the end of nearly 45-minute debate, Konieczny said he would not support a proposal that was made to delete the entire preamble. He said he worked on the resolution all week and accepted “multiple revisions” because he was conscious of the differences that ACC members represent.

“I’m distressed. My heart is broken. My faith is challenged that” the council cannot affirm the statement made in the week-old Code of Conduct and “that we want to send a message to the world that we will respect you at a distance, but you’re not welcome. This is not the body of Christ in which I belong.”

For the ACC to debate whether anyone was a child of God and welcome in the church “is beyond my understanding,” he said, adding that 50 percent of the geographical areas of the member churches “disenfranchise, incarcerate and execute people who differ in their human sexuality, yet we say nothing.’

“Instead, we’re worried about the politics instead of the people.”

After the members paused to pray, ACC Vice Chair Margaret Swinson ruled that the proposal to delete the preamble “destroys the spirit in which this motion was offered too much” for her to exercise her discretion to allow it to come to a vote. 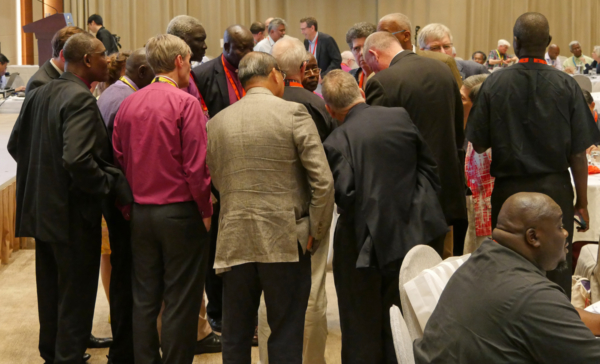 During the afternoon tea break, an increasingly large group of ACC members gathered around the Archbishop of Canterbury and Oklahoma Bishop Ed Konieczny as they stood below the dais in the council’s meeting room, searching for compromise. Photo: Mary Frances Schjonberg/ Episcopal News Service

Welby suggested that the council pause for table group discussion. That pause led into what became a nearly 50-minute “tea break” during which various combinations of members and staff huddled, sometimes joined by Konieczny, trying to craft a compromise. Welby was often at the center. Waweru and Konieczny worked together at one point, Waweru with his hand on Konieczny’s back as he sat and read the final proposal.

With that draft in hand, Swinson asked the members to listen to Welby and decide if they could accept it as a compromise. He reminded the members that the Anglican Communion has fiercely disagreed in the past about contraception, divorce and women’s ordination. “So, we must not panic” about the current chapter in the communion’s the nearly 30-year-old debate about sexual identity.

“It may be that at the end of time, I will understand that I got that wrong, and I will answer for it in one respect or another on the day of judgement,” he said. “Where I handled it badly, which I am sure I did, for one group or another, I want to apologize to you because I have not helped the communion, either for those who are concerned by who was invited or those who are concerned by who was not invited.

“I ask your forgiveness where I made mistakes.” 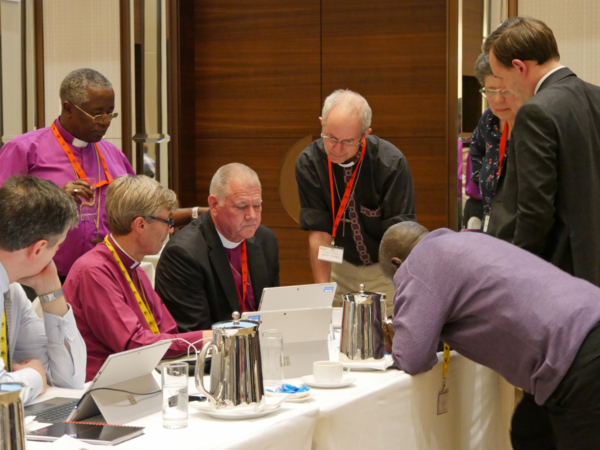 The compromise wording, which came to the council as an amendment by Waweru, notes “with concern the pattern of invitations to the Lambeth Conference 2020” and asks Welby to put in place a listening process “with supportive and independent facilitation in order to hear the concerns and voices of people especially those who have felt themselves marginalized with regard to their sexuality.”

Welby must also organize the collection of the work already done in the communion since Lambeth 1998 Resolution 1.10 called for such a process. He is to report to the Standing Committee and ACC-18 in 2022. Lastly, the resolution asks him to report to both groups about “all issues of discrimination” across the communion.

After his apology and explanation of Waweru’s amendment, Welby apologized in French and translated the amendment into French. He asked Diocese of Northern Argentina Nick Drayson to translate both into Spanish and Diocese of Central Tanganyika Bishop Dickson Chilongani to do the same in Swahili. Members for whom English is not their first language have struggled throughout the meeting from the lack of any formal interpretation or translation services.

Struggling to speak, he said he wanted his “brother bishops in the south” to know that “we are willing to talk, and walk in unity and love together, and encourage them to come and meet with us.”

Waweru’s amendment passed 83-0 with three abstentions in a straw poll meant to test its strength. Waweru, Chilongani and Bigirimana came to Konieczny to hug him. Konieczny kissed Waweru’s hand as the members began to sing “Bless the Lord, my soul.”

The council formally convened and passed the amended resolution “by general consent.”

The resolution, titled “The dignity of human beings,” says

The council later rejected a previously filed resolution that would have asked Welby to consider establishing a theological task group to clarify the core identity and boundaries of the Anglican Communion in the 21st century. Konieczny said he feared the resolution’s actual intent was to create a body with the power to declare “who’s in and who’s out in the Anglican Communion.”