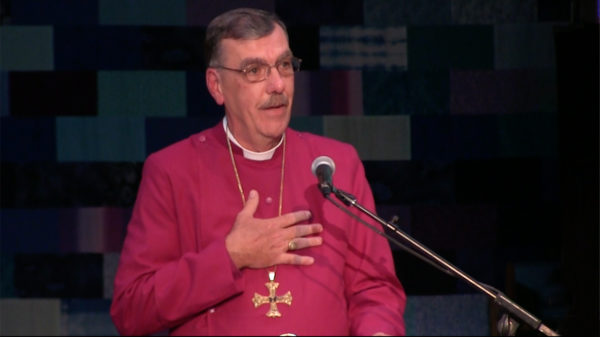 The Right Rev. Thomas C. Ely, bishop of the Diocese of Vermont, announced his retirement.

[The Episcopal Church in Vermont — Burlington, Vermont] The Right Reverend Thomas C. Ely, tenth bishop of the Episcopal Diocese of Vermont, recently announced his intention to retire and resign his ministry, no later than September 30, 2019. He has agreed to remain in his position until a successor is chosen and is in place.

Ely, 65, was consecrated as bishop of the Vermont diocese in 2001, having previously served as a priest in the Diocese of Connecticut for 20 years. In a message to the people of the Diocese of Vermont, Ely said that by the time of his retirement he will have served in the priesthood for nearly 39 years.

“There are other interests and ministries to which I am feeling called to devote my time and energy while my health and stamina are still good,” Ely said, “including family, community theatre, various justice ministries and a bit more golf.”

During his episcopate, Ely has been a leader both within the diocese and throughout the wider Episcopal Church on such controversial issues as marriage equality, the ordination of LGBT clergy, increased gun safety and racial justice. He is also a leading voice on matters of environmental and economic justice.

As part of his global outreach, Ely serves on the board of Cristosal, a nongovernmental agency based in El Salvador that works to advance human rights in Central America. Additionally, he is a co-founder of the Vermont chapter of Kids4Peace, a grassroots interfaith youth movement dedicated to ending conflict and inspiring hope in Jerusalem and divided societies around the world. More locally, Ely is a leading advocate for the Vermont Ecumenical Council and Vermont Interfaith Action.

Ely has been instrumental in the stewardship and revitalization of Rock Point, a 130-acre property in Burlington, owned by the Vermont diocese, known for its natural beauty and peaceful atmosphere. Each year, nearly 10,000 people visit Rock Point, and Ely is overseeing a $1.7 million partnership campaign aimed at improving facilities, strengthening leadership and expanding public access.

Ely said that he and his wife, Ann, will take up residence in their house in Newfane, Vermont, upon his retirement. In the meantime, he says, “I plan to use these months ahead to continue encouraging full and passionate engagement in our local mission approaches, and I plan to continue my efforts related to a sustainable Rock Point and all that means to our life as the Episcopal Church in Vermont.”

Ely’s message to the people of the diocese can be found at this link.