Two become one in this Virginia Episcopal mission 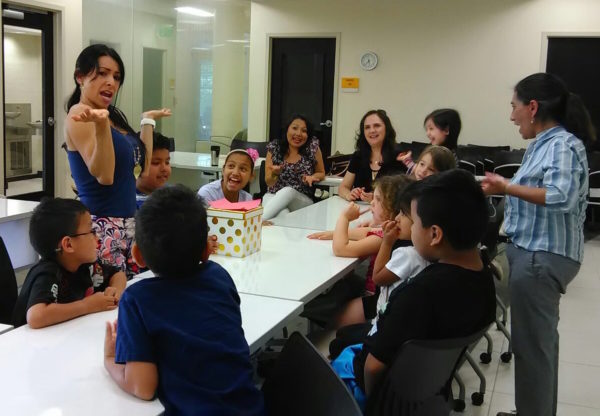 St. Gabriel’s parishioner and volunteer teacher Luz Margery Quiceno-Spencer leads an Educating with Love class for children, teaching them how to read and write in Spanish, which they speak at home while learning English reading and writing at school. Photo courtesy of St. Gabriel’s Episcopal Church

[Episcopal News Service] A Puerto Rican corporate entrepreneur-turned-priest wasn’t the obvious answer for a failing church with no permanent home in Leesburg, Virginia, where attendance had dwindled to 20 people.

English is the Rev. Daniel Vélez-Rivera’s second language, and St. Gabriel’s was an Episcopal church where English was the first, and for the most part only, language spoken by its Anglo congregation.

Yet, the congregation’s unlikely choice has been a catalyst for growth and ministry expansion. An expert in start-ups as a lay person and a church-planting priest after being ordained 12 years ago, Vélez-Rivera’s efforts have drawn 98 people to Sunday services since he arrived in 2012. The church has been a flurry of activity — with challenges and rewards — bolstered by its first New Church Start grant of $100,000 awarded during the 2013-2015 budget cycle, followed by a recent $75,000 renewal grant in the current triennium, Vélez-Rivera said.

Today, the priest leads a single congregation with two Sunday services: one in English, the other in Spanish. Membership is about 50-50 of the two populations, he said.

“Serving God’s children is messy. It’s not just liturgy and services. Starting churches the way Peter and Paul did, it’s not easy; it’s not comfortable,” Vélez-Rivera told Episcopal News Service. “It might fail, it might not flourish, but you have to try — like start-ups.” 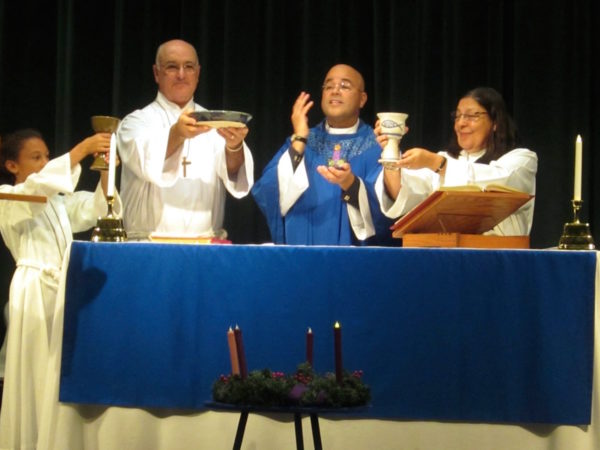 Leesburg is in Loudoun County, one of the wealthiest, fastest-growing counties in the United States with an annual median income of $125,672, according to a 2016 survey by the U.S. Census Bureau. It’s a Washington, D.C., commuter city where the Latino population is burgeoning as a result of that growing economy — filling jobs in construction, landscaping and farming — but they can’t afford living there.

In a county where almost one-quarter of its population is foreign-born, St. Gabriel’s had to look outside of itself to minister to the new people in town. It was the key to survival.

That’s pretty much the point of these grants.

Resolution D005 and Resolution A012, approved by General Convention in July 2015, called for the new and continued funding of church plants and Mission Enterprise Zones.

Mission Enterprise Zones are designated geographic areas, congregations or dioceses with a mission focused on serving under-represented groups, such as young people, poor and less-educated people, people of color, and those who never, or hardly ever, attend church. 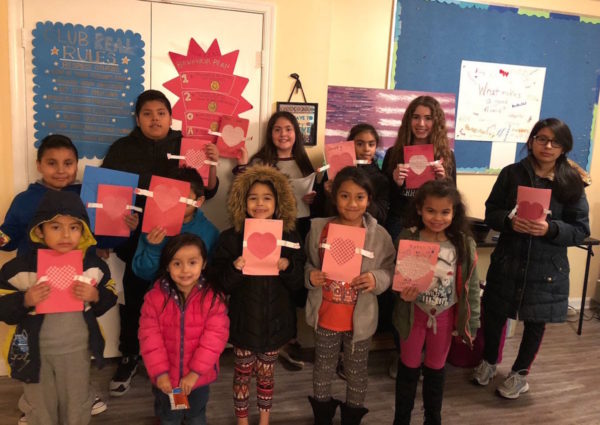 As a single congregation in which two languages are spoken, St. Gabriel’s is a study in contrasts that complement each other: It is both the planting of a Latino congregation, and the restart of an Anglo congregation founded by the Rev. Jeunee Cunningham in 2002-2003 as a mission plant and daughter church of St. James Episcopal Church in Leesburg. Membership dwindled after Cunningham left.

When Vélez-Rivera arrived to be vicar of St. Gabriel’s in 2012, it was almost like he needed to plant a whole new church with the remaining members.

The priest had some tough lessons ahead, despite his business experience in start-ups. Sunday attendance dropped from 20 to 15 people in those early days. He listened to concerns and logistical issues that people expressed and worked on growing the English-speaking congregation first. Then, Vélez-Rivera spent time getting to know the Latino community better, at grocery stores, soccer games and festivals, in order to make his face familiar and learn about people’s needs.

On his first Spanish-language Easter service, only one person showed up.

“I cried on the way home. It was so hard. They said the place was hard to find. That’s when I stopped, full-stop, to think,” Vélez-Rivera said. He turned to the parent church of St. James and was offered their space on Sunday afternoons.

On Sundays, the English service is at 10 a.m. in a middle school, and the Spanish service is at 3 p.m. at Saint James, followed by a meal and Bible study. Once a month from June to October, members from both services unite for a joint, bilingual service outdoors at Chapel in the Woods. The family of a St. James parishioner honored her will and gifted to St. Gabriel’s almost 12 acres of land, where the chapel is located. The outdoor altar and benches are made from the land’s timber, milled by the family.

Once zoning and other administrative issues are figured out, Vélez-Rivera has plans to build a permanent St. Gabriel’s structure for everyone to meet and worship. And by everyone, he means the community at large. “I’m so psyched,” he said.

It’s an example of how the old guard is welcoming and blending with the new.

“One of the primary learnings from St. Gabriel’s is that kind of work is lonely work for any leader, especially for an outspoken, Puerto Rican, prophetic leader like Daniel,” said the Rev. Tom Brackett, the Episcopal Church’s manager for church planting and mission development. “He has struggled to bring along an aging congregation and engage them in ministry with people unlike themselves, and he has done it beautifully.” 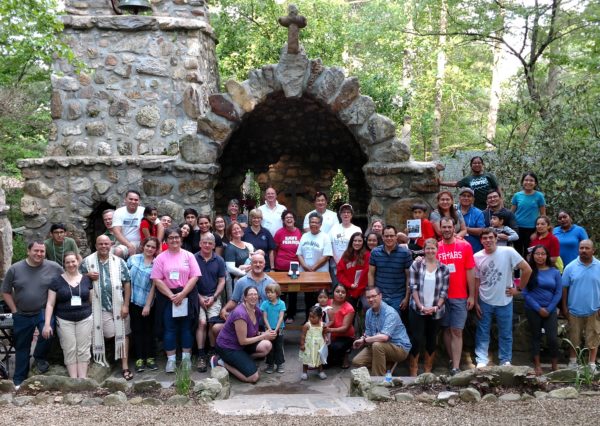 Bob and Lisa Cusack have been members of St. Gabriel’s for 14 years, watching membership dwindle and then gradually transform into something new and grow. The older, Anglo members and newer Latino members mingle at special services, such as the Easter service and Feast of Our Lady of Guadalupe. At the annual St. Gabriel’s retreat at Shrine Mont in the Shenandoah Valley, they unite at meals, bonfires and hikes.

Communication isn’t much of a problem, they say, because there’s always someone around who can help translate if necessary, especially the children. To collaborate better, they recently added two people from the 3 p.m. service to the vestry, said Bob Cusack, also the senior warden. Longtime parishioner and volunteer music director Peter Schweitzer takes a leading role in the music for the English service and participates in the music as a choir member and flautist at the Spanish service.

“When you’re a church that’s lived out of a box for 14 years, you become a very tight-knit community. Everybody contributes,” Bob Cusack told ENS. He and his wife laughed. “And there’s a lot of food, which needs no language. It’s very relaxed. Everybody’s just trying to learn from everybody else. It’s a good learning experience.”

Lisa Cusack, who teaches Sunday school, agreed: “We share our faith, and that’s the most important thing, and that brings us together.”

The goal is to be as welcoming and accessible to all people as possible, Vélez-Rivera said.

At a recent barbecue fundraiser with music and games, tickets were sold on a sliding scale depending how much the person could afford. The same goes for the children’s summer camp fees. When school has an extended break, St. Gabriel’s sends food home for schoolchildren who qualify for the free and reduced lunch programs in collaboration with Backpack Buddies and Loudoun Hunger Relief. 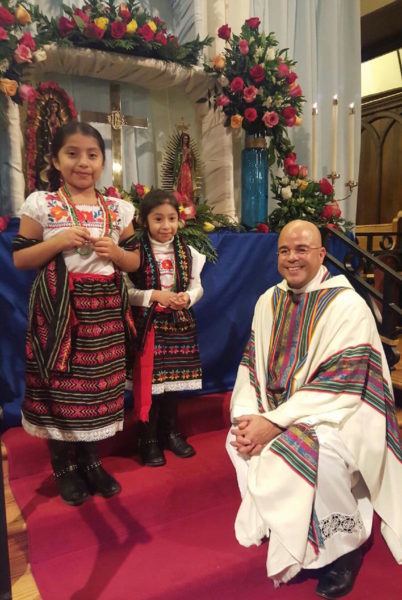 Children are taught to celebrate their cultural heritage, one of the ways that the Rev. Daniel Vélez-Rivera, gathers into the church family parishioners whose first language is Spanish. Photo courtesy of St. Gabriel’s Episcopal Church

“We are serving the people that other churches don’t serve: the marginalized, the poor, the Latinos, not the traditional Episcopalians you think of when you think of the Episcopal Church,” Vélez-Rivera said. “My goal is for more churches to be all inclusive. Many churches are more clubby, and I’m not a club person. We’re a church.”

St. Gabriel’s growth in the last few years is not just because of the ability to worship in Spanish, but because parishioners can receive pastoral care and support for issues affecting their everyday lives, said Aisha Huertas, director of mission, outreach and diversity for the Diocese of Virginia.

“More and more churches should follow the example of congregations like St. Gabriel’s by creating and nurturing congregations that do not ignore the language, cultural diversity and challenges of the communities that surround them, but rather live into God’s call to love our neighbor,” Huertas told ENS. “It is hard to show our neighbors a Jesus kind of love, if we do not meet them where they are.”

Where are they? Crowded in apartment complexes. To solve transportation issues and provide the comfort of home turf, St. Gabriel’s was granted access to one of these apartment building’s community rooms to operate Educando con Amor, or Educating with Love, part of the church’s social justice ministry.

In that program, Eva María Torres Herrera teaches the U.S.-born, English-speaking children of immigrants how to read and write in Spanish so they can become fully bilingual. That way, they’ll be able to get into better colleges and be more marketable for better jobs. 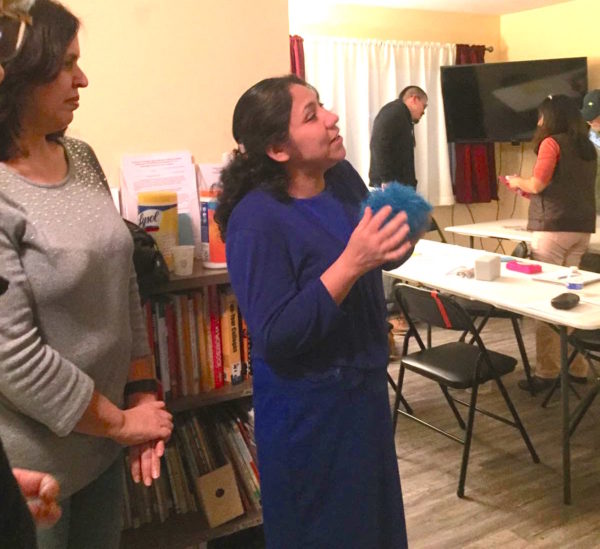 Maria Diaz, a student of St. Gabriel’s Educando con Amor adult ESL program, plays the ball toss game in which the catcher has to say something in English. Photo: Eva Maria Torres Herrera

Sarah Ali Svoboda is the director of Educando con Amor’s adult ESL (English as a Second Language) program, teaching practical life skills literacy in English. She helps each adult with his or her goals, whether it’s tailoring a resume toward management positions, helping someone shop at the grocery store, explaining what to say at a bank, or using role-play to practice sharing symptoms with a doctor and making a medical appointments by phone. One language-learning technique that reduces anxiety is a ball-toss game, in which whoever catches the ball has to say something in English.

“It’s a safe space where no one is going to ask them for papers, and they can learn English without feeling embarrassed,” Svoboda said. “There are no handouts. It’s really about giving them skills so they can help themselves, get jobs and thrive in this country.”

Huertas said she believes that these efforts of radical welcome, justice, and love will prompt growth in the Episcopal Church as a whole.

“The makeup of the United States is changing and we, as a church, must be willing to change in ways that will address the needs of people today,” Huertas said.

“Most importantly, this work is living into God’s dream for human kind, that we will all live together in harmony — even if living in harmony means dealing with the discomfort of doing things unlike ‘we’ve always done them.’”

— Amy Sowder is a freelance writer and editor based in Brooklyn, New York. She can be reached at AmySowder.com.