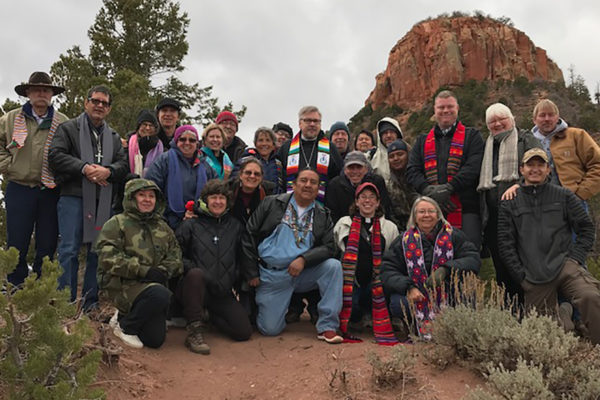 An interfaith delegation gathers in November at Bears Ears National Monument to call on the Trump administration to maintain the more than a million protected acres. Photo: The Rev. Andrew Block, via New Mexico Wildlife Federation

[Episcopal News Service] Episcopalians are standing firm alongside an interfaith community of activists to defend land in Utah considered sacred by Native American tribes as President Donald Trump on Dec. 4 announced he would dramatically reduce the size of the Bears Ears National Monument.

Some of those activists have rallied in recent days in Salt Lake City, where Trump traveled to make his announcement. Others have offered their support from across the country and now are condemning the president’s decision.

“It demonstrates a clear lack of understanding on his part for what the land means to indigenous people and the relationship that we have with the land,” the Rev. Brad Hauff, Episcopal Church missioner for indigenous ministries, told Episcopal News Service after Trump’s action. “When you take away the land or you damage the land, you’re assaulting the indigenous people’s identity.”

The fate of Bears Ears has been a regular topic of discussion among members of St. Christopher’s Episcopal Mission in Bluff, Utah, directly south of Bears Ears.

“People are not happy about it,” the Rev. Kay Rohde, priest-in-charge at St. Christopher’s, told ENS. “It’s just beautiful country, and to see oil rigs doting the landscape is not exactly what I think this place could be.”

Bears Ears is 1.35 million acres of federal land in southeast Utah that was designated as a national monument in December 2016 by President Barack Obama as one of his final acts as president. In a statement announcing the creation of Bears Ears and Gold Butte National Monument in southern Nevada, Obama said his goal was “to protect some of our country’s most important cultural treasures, including abundant rock art, archeological sites, and lands considered sacred by Native American tribes.”

The designation barred new natural resource extraction on the land, a move that was cheered by Native tribes in the region and conservationists but opposed by state lawmakers, who accused Obama of overreach.

Trump took office vowing to undo much of his predecessor’s legacy, and in April he ordered Interior Secretary Ryan Zinke to review 27 national monuments and recommend changes. Zinke’s recommendations included reducing the size of at least four national monuments, including Bears Ears and Grand Staircase-Escalante, another vast national monument in Utah that was created by President Bill Clinton in 1996.

In response to looming threats to the monuments, Episcopal leaders have joined a chorus of faith leaders this year in speaking out. Presiding Bishop Michael Curry was one of five heads of Christian denominations who signed a letter to Zinke in July opposing changes to Bears Ears.

“As Christian leaders, we are committed to taking an active role in the work of remembering, repenting, healing from, and never repeating historic racial injustices,” the letter said. “Collectively, we are deeply concerned about the proposed action to reduce the size of the Bears Ears monument and the process being utilized.”

Last month, dozens of interfaith clergy members, including a representative of the Episcopal Church’s Navajoland Mission, traveled to Bears Ears to show solidarity with the cause of the five tribes, including the Navajo Nation, that have fought to protect the land.

Much of the interfaith activism on Bears Ears has been led by the group Creation Justice, which gathered hundreds of supporters’ signatures on a letter to Trump dated Dec. 1 with a final plea that he preserve the “spiritual riches we have been blessed to inherit from past generations.” (The Episcopal Church is a member of Creation Justice.)

“The church believes in the stewardship of creation and the stewardship of resources for the benefit of all rather than the benefit of a few,” the Rev. Vanessa Cato told ENS. Cato, priest-in-charge of Episcopal Church of the Good Shephard in Ogden, Utah, was among those who signed the letter. Some of her congregation’s members participated in the rallies in Salt Lake City supporting preservation of the national monuments.

By rejecting their pleas, the president has opened the door to renewed commercial activity in Bears Ears, a possibility he alluded to in his remarks Dec. 4.

“Some people think that the natural resources should be controlled by a small handful of very distant bureaucrats located in Washington,” he said. “And guess what, they’re wrong.”

Trump removed more than 1.1 million acres from Bears Ears National Monument and nearly 862,000 acres from Grand Staircase-Escalante. The president’s move, however, likely will face legal cases challenging his authority to reduce federal protected land on such a scale.

“We expect to see the issue thoroughly discussed,” said Mark Maryboy, a member of St. Christopher’s in Bluff. “I think we’ll have opportunity to sit at the table and explain exactly why we want the land protected.”

Maryboy, 61, is a leader of the conservation group Utah Dine Bikeyah that first began advocating for creation of the Bears Ears National Monument. This week, while some fellow activists, including his brother, traveled to the state capital to protest Trump’s decision, he has remained back home near Bears Ears, fielding interview requests from national and international news outlets.

In Native American spirituality, church isn’t just a place to visit once a week on Sundays, he said. It is visited daily in the mountains, rocks, streams and wildlife of sacred places like Bears Ears. The fight to protect such places is far from over, he said.

“We believe that we will prevail,” he said.

The Rev. Mary June Nestler, canon to the ordinary of the Diocese of Utah, noted that the Episcopal Church’s outreach to Native Americans in the region dates back more than a hundred years, and its support for Native heritage continues today.

“We wish that sustained, substantive dialogue had been undertaken with Utah Native Americans, people of faith communities, and other constituents who do not want to see these precious monuments despoiled to enrich the few, to desecrate sacred places, to further the fossil fuel industry, and to subject these beautiful and lands to commercial degradation,” Nestler said in an emailed statement.