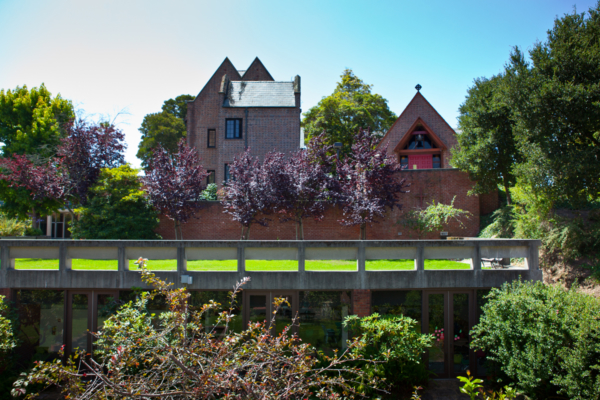 Church Divinity School of the Pacific’s Berkeley, California, campus fills an entire block and is a mix of buildings from two centuries. Photo: CDSP

The Very Rev. W. Mark Richardson, CDSP president and dean, told Episcopal News Service in an interview that the deal will put the school on a solid financial footing and position it for growth. CDSP and its assets now belong to Trinity, he said, and the value of those assets “will be a fund, among other resources they have, that supports the program at the school and operation.

“It’ll be starting point of the kinds of funds we need to, say, augment faculty or to provide scholarship funding for students,” he said. “This becomes part of their assets that are poured back into the mission of the school.”

Trinity sees CDSP as part of its strategy “to present and offer the curriculum that will bring new leaders into the world that can gather communities and resource them in a way that we have not been able to do currently,” the Rev. William Lupfer, Trinity’s rector, told ENS in an interview.

Ultimately, Trinity and CDSP hope to add more faculty and an expanded curriculum will train clergy and laity for a changing church, especially in the areas of leadership development, formation and community organizing. Making theological education more affordable is also a goal, church and seminary officials say. Both organizations hope to expand their current relationships across the Anglican Communion.

“It’s going to strengthen and enhance our programing,” the Rev. Ruth Meyers, the school’s academic dean, told ENS. “Trinity has this history of not only doing work in leadership development but [building] relations around the Anglican Communion, and I think that’s really going to enhance the work we’re doing at CDSP.” 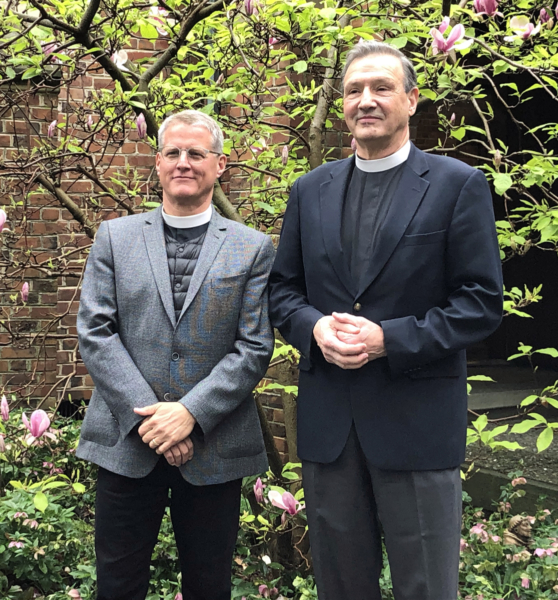 Trinity Wall Street also includes the church in Lower Manhattan, nearby St. Paul’s Chapel and the Trinity Retreat Center in West Cornwall, Connecticut, as well as partnerships that involve housing for the elderly, the homeless and people with disabilities, among others. The parish also has a $6 billion portfolio that includes major real estate holdings, primarily in New York where it is both a developer and a landlord.

The church’s vestry is now the seminary’s governing body. “But our vestry will not manage CDSP,” Lupfer said. “We will have staff members supporting the folks who are currently managing CDSP.”

The Association of Theological Schools, the accrediting agency for all Episcopal Church-tied seminaries, has agreed to continue to accredit CDSP under the new governance structure. That means CDSP can continue to grant degrees. “CDSP is not going away,” Meyers said.

Lupfer, Richardson and others involved in the discussions, which went on for close to 18 months and led to the agreement, told ENS that Trinity and CDSP expect to maintain the seminary’s current management, faculty and staff at the school for the near future. The current curriculum also will be maintained in the near term, they said.

Lupfer and Richardson announced the agreement March 4 in CDSP’s chapel to students, faculty and staff. That gathering began two days of meetings and question-and-answer sessions with Lupfer, Richardson, faculty and CDSP and Trinity senior staff.

Quoting the spiritual that says, “I got a home up in that kingdom, ain’t that good news,” Presiding Bishop Michael Curry said in an emailed statement that the agreement “is not simply a matter of institutional rearrangement.”

“That would be news. But this is more than news. This is good news in the biblical meaning of that phrase. For this is about a creative relationship that will enable the seminary to train and form leaders for a church daring to be more than merely an institution,” Curry said. “This is about forming leaders for a Jesus movement committed to living, proclaiming and witnessing to his way and message of unconditional, unselfish, sacrificial liberating love. That movement changed lives and the world in the first century, and it can do it again in the 21st century. This new relationship helps to form leaders for that. And that is truly good news!”

The Rev. Gay Clark Jennings, president of the House of Deputies, also praised the agreement.

“I’ve just returned from serving as St. Margaret’s Visiting Professor of Women in Ministry at CDSP, where I met students and faculty with the fresh energy and ideas we need in the 21st century church,” she said in a statement emailed to ENS. “This new alliance between CDSP and Trinity Church Wall Street is a visionary and innovative way to pair that energy with resources and partnerships that span the globe, all in the service of the gospel. Our church needs just the kind of leaders that this partnership will provide.” 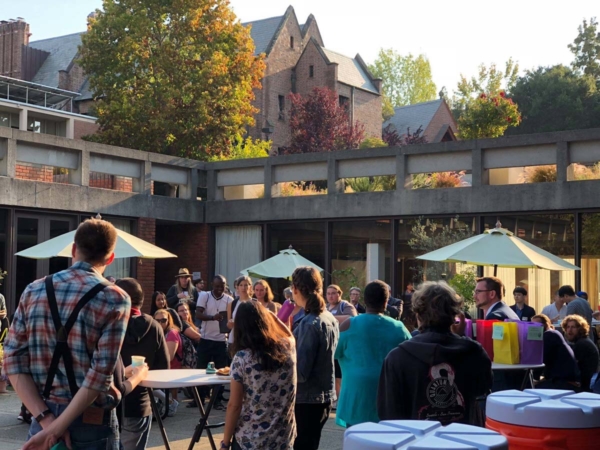 CDSP, founded in 1893, is one of 10 seminaries with ties to The Episcopal Church. It is not the first of those schools to change their ways of being in order to survive the economic challenges facing all small graduate schools, and seminaries in particular. In 2012, Bexley Seabury Seminary was formed through a federation of two Episcopal seminaries, Bexley Hall Seminary in Columbus, Ohio and Seabury-Western Theological Seminary in Chicago, Illinois.

In 2017, Episcopal Divinity School announced it would be closing its Cambridge, Massachusetts, campus and entering an affiliation agreement with Union Theological Seminary in New York. The new entity is called Episcopal Divinity School at Union. Earlier this year, EDS at Union said it had begun a long-term lease for its remaining Cambridge property with The Church in Cambridge. The move was the latest in a process that began in March 2008 when the seminary sought to secure its financial future by entering a partnership with Lesley University, in which Lesley bought seven of the 13 buildings EDS owned on its eight-acre campus.

Request of advice led to agreement

Trinity and CDSP did not set out to strike an acquisition deal. “It started by accident, frankly,” Richardson said. He and then-trustees chair Don White had turned to Trinity for advice when the school was considering how it might capitalize on its parking lot, one of the few nominally empty spaces in the neighborhood just north of the University of California, Berkeley.

“We seemed to have started at an inspirational moment,” Richardson said. “They knew we weren’t there to get into their pocketbook. We just really had some things we needed to do and knew they had the expertise.”

Richardson said the seminary would base any potential development on the goals of adding value to the neighborhood, providing income for the school and driving mission.

“It’s got to meet all three, or it’s not serving the school’s long-term history and needs,” he said he told Lupfer and others.

The rector replied that he and Trinity take an even broader, more holistic approach to such questions. The conversation eventually left the parking lot behind as its scope widened.

Trinity, Lupfer said, has always looked at land “as an economic opportunity that needs to be activated” for broader, missional uses. Thus, the parking lot conversation evolved into a recognition that Trinity has cash and CDSP has “all this intellectual power and it’s aligned in the ways in which we are interested in,” Lupfer said, including leadership development, formation and community organizing.

The Church Divinity School of the Pacific campus sits on what is known as Holy Hill, which has views of San Franciso Bay. Photo: Google Maps

The “inspirational” part of the agreement was striking to CDSP alumnus and trustee, the Rev. Brendan Barnicle. A stock analyst and investment banker who had seen “lots of deals over the years” before he went to seminary, Barnicle said that as he watched “the dialogue and the way this was being done, maybe not surprisingly, I’d never seen  a deal where the Holy Spirit was so apparent because there was so much new and creative about this.”

Barnicle, of St. Peter’s Episcopal Church in Portland, Oregon, added that “if we expect parishioners to think about how they steward their resources then we, as the church, need to be a model, and I think that is what CDSP is doing by entering into this relationship.”

The faculty soon became part of the conversations about a possible deal. “This is different from some of the other seminary drama that we have had in the last few years in that the faculty are really on board,” Meyers said.

A member of the faculty sat on the CDPS board and joined in the deliberations. Input from those representatives has been “welcomed and well received by other member of the board,” Meyers said. The faculty had been “listened to and attended to” during the conversations and negotiations, she added.

Kathleen Moore, a CDSP senior whom the student body elected as ombudsperson for this academic year, told ENS she was “pretty excited when I heard about it and I am still pretty excited.” Moore represented students’ interests on the Board of Trustees and elsewhere, and she said she told her trustee colleagues that the deal is an instance of CDSP “putting into practice what it teaches and preaches” about adaptive change.

Barnicle acknowledged, “it’s risky to make a change like this and to potentially give up some of the control and authority and what not; yet as we think about the church going forward, being willing to take those kinds of risks are some of the things I think that we called to do.”

Moore said she has learned at CDSP “to look at those unknowns with an open mind, an excited mind and we have a scriptural basis for this kind of thing to go forward not knowing exactly what’s going to happen but having trust.”

The details of the new arrangement will be worked out, Richardson said, “as we stumble over ourselves and learn from our mistakes and then pick up a start again.

“I think the church knows as whole that we need innovation in theological education and in the church, period. Innovation, when it’s true, is often disruptive. All of that will be part of the story moving forward.”

Lupfer agreed. “Being iterative and being open to the future and to learning together and experimenting is a critical part of today’s world,” he said. “We would not want to be with someone who had the illusion of certainty of the future.” 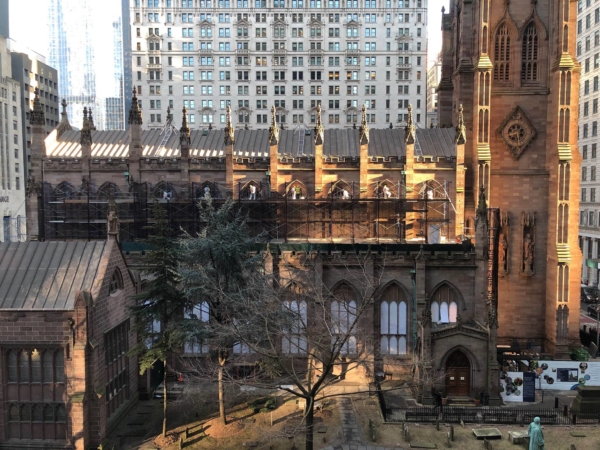 One of those unknowns is how alumni and other donors will react to the news. Will they think they no longer have to give because of Trinity’s wealth? “What we hope is that people will see this as a strengthening of the seminary and still be able to give to the focused programming of CDSP,” Meyers said, explaining that focus might also apply to scholarship fund and faculty chair endowments. “There’s still going to be continuing need. We are one tiny part of the Trinity budget.”

The agreement also represents a significant change in each organization’s culture. Combine one to the oldest institutions in The Episcopal Church with a seminary to the West created to serve the West and there will be “amazing contrasts,” Richardson said, including a big staff at Trinity and a “small, scrappy school that has a fraction of that.” Yet, both Richardson and Lupfer said their institutions are geared toward the missional work of the church in the world.

And, Lupfer said, Trinity is not aiming to compete with the other Episcopal Church-connected seminaries.

“We see this as additive for everyone,” Lupfer said, who spoke to ENS right after meeting with the dean of another seminary and assuring him of Trinity’s ongoing contributions to that school’s capital campaign and annual fund drive.

“If there’s any bulking up at CDSP, which of course we would expect, that would probably happen with international students or students who would not go to a residential seminary without financial aid,” he said. “We don’t see ourselves competing for students with other the other seminaries. And we see ourselves cooperating with the other seminaries around curriculum areas that we’re interested in.”