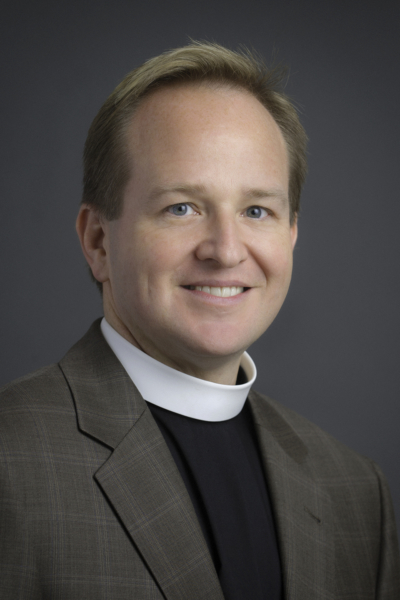 [Episcopal News Service] The Rev. Thomas James Brown was elected Feb. 9 to become the 10th bishop of the Diocese of Maine.

Brown, 48, was elected at a special convention in Bangor. One of five nominees, clergy and lay delegates chose him on the third ballot. He received 57 votes in the clergy order and 84 votes in the lay order. (The diocese’s ballot page does not indicate how many votes were required in each order for an election.)

Brown is currently the rector of the Episcopal Parish of the Epiphany in Winchester, Massachusetts.

The other nominees were:

The diocese made history with the election. Brown will become The Episcopal Church’s only openly gay and married bishop currently leading a diocese. He is married to the Rev. Thomas Mousin, who is currently the rector of St. John’s Episcopal Church in Charlestown, a neighborhood of Boston.

The church currently has one other openly gay bishop. The Rt. Rev. Mary Glasspool was elected as bishop suffragan of the Diocese of Los Angeles in December 2009 and consecrated May 2010. She has been an assistant bishop in the Diocese of New York since April 2016. She is married to Becki Sander.

The Rt. Rev. Gene Robinson became the first openly gay and partnered bishop in the Anglican Communion in 2003 and served as the Diocese of New Hampshire’s bishop until his retirement in January 2013. He and his then-partner of 25 years Mark Andrew were joined in a civil union in 2008 and married in 2010. They divorced in 2014.

Robinson’s consecration and ordination became a flashpoint in both The Episcopal Church and the Anglican Communion. Early in 2008, then-Archbishop of Canterbury Rowan Williams refused to invite Robinson to the decennial Lambeth Conference gathering of all the bishops in the Anglican Communion. Some other bishops refused to attend the conference due to theological disagreements with the main body of the church about the full inclusion of LGBTQ people and women in the life of the church.

The Anglican Communion office has not responded to Brown’s election.

After the election, the Rev. Maria Hoecker, rector of St. Columba’s in Boothbay Harbor and president of the Diocesan Standing Committee, said “We have been blessed by the Holy Spirit today with the election of Thomas Brown and the gifts he will bring as our next bishop,” according to a news release.

The bishop-elect told the delegates via a video link, “I give God thanks and praise for this call, and the opportunity to continue building the church in Maine on Christ the solid rock. Bishop Lane and his family, along with the diocesan staff, and every congregation are in my prayers as they continue in the holy work of transition. To God be the glory.”

Brown received his Master of Divinity from the Church Divinity School of the Pacific, an Episcopal Church seminary in in Berkeley, California. He has also served as rector of St. Michael Episcopal Church in Brattleboro, Vermont, and as the director of alumni and church relations at CDSP. Bishop-elect Brown has held many leadership positions in The Episcopal Church and in the Diocese of Massachusetts, and is currently chair of the Church Pension Fund’s board of trustees.

Pending consent of a majority of the church’s bishops with jurisdiction and the diocesan standing committees, Brown will be ordained and consecrated on June 22 at St. Luke’s Cathedral in Portland. Presiding Bishop Michael Curry will officiate. Brown will succeed the Rt. Rev. Stephen T. Lane who has served the diocese since 2008 and will retire in June.