Teens, not adults, lead Episcopalians in gun-violence protests and marches 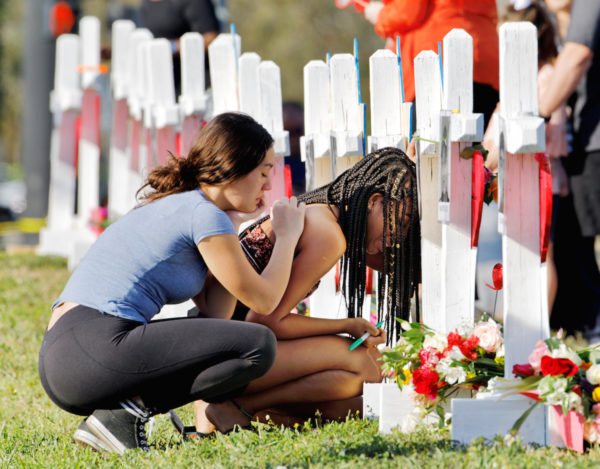 A senior at Marjory Stoneman Douglas High School weeps in front of a cross and Star of David for shooting victim Meadow Pollack while a fellow classmate consoles her at a memorial by the school in Parkland, Florida, on Feb. 18. Photo: Reuters/Jonathan Drake

After the deadly mass shooting at a Florida school on Feb. 14, the senior at Fishers High School in a suburb of Indianapolis, Indiana, said no school is safe from gun violence anymore, and that’s not right.

Jacob attends St. Christopher’s Episcopal Church in Carmel, and she’s on the Diocese of Indianapolis youth steering committee. Her committee decided during a Feb. 25 conference call to talk during their March 3-4 youth retreat about how they feel about what happened, what they can do about it and share opportunities.

She hopes to attend the national student-led March for Our Lives in Washington D.C. on March 24, while other teens join local marches on the same day nationwide.

“We like to think it doesn’t affect our area, but it does. It’s not just ‘those’ people. It could happen to anyone, anywhere,” Jacobs told Episcopal News Service just after she got out of class.

At Jacobs’ school and at others nationwide, teens are planning a walkout at 10 a.m. March 14, for 17 minutes, each minute for a person who died at the South Florida school.

Since then, Episcopal teenagers and children are among the wave of youth across the United States sparked by the most recent shooting to protest, march and speak out for meaningful gun legislation. Nicholas Cruz, who is charged in the Parkland shooting, used the same kind of gun used in several other mass shootings, most notably at the 2012 shooting that killed 27 people at Sandy Hook Elementary School in Newtown, Connecticut.

They cannot ignore thousands of letters! All you have to do is pick up a pen and write! We will make change! #NeverAgain pic.twitter.com/LSv3UUbCXo

Diocese of Central Pennsylvania Bishop Audrey Scanlan will join a youth group to rally and march at the capitol in Harrisburg on March 24. Clergy is invited to attend, vested in cassocks to be a clear, visible witness, she said. The diocesan website has resources on how to respond to gun violence, and its Facebook page will be updated with local events. There will be rallies also in York, Lancaster and possibly Williamsport, she said. More than 1,000 people expressed interest in the Harrisburg event and more than 4,000 for Lancaster.

Although the Washington D.C. march is only a couple hours away, Scanlan wants to stay local. “The whole idea that this is being led by the students is just tremendous, and I want to support our youth in our schools where we live, which I think is more important,” she said.

Whenever there’s a school shooting, Scanlan thinks of 2006 shooting in West Nickel Mine, Pennsylvania, where a gunman shot 11 people in a one-room Amish school house, killing five girls.

So, with this youth movement, Scanlan refers to the Isaiah 11:6 passage, “a little child will lead them.”

“We as adults have a responsibility to create and maintain a just and peaceful society, and we are failing. Our society is fractured and gun violence is one of the symptoms. When our children rise up, I can do nothing less than follow them. They deserve my support,” Scanlan said.

The Rev. Mark Sims, rector of  St. Mary Magdalene Episcopal Church in Coral Springs, Florida, asks people to respect the teens during this tough time and listen to what they have to say. One of the school shooting victims, Carmen Schentrup, a 16-year-old youth group leader, belonged to his parish.

“There may be individual students who are interested in participating, but at this time, the school as a whole is not taking any specific action beyond internal communication with our faculty and families,” Jennings told ENS. The school constantly updates and re-evaluates security procedures on campus, a process that was already under way at the time of the Parkland tragedy, she said.

Several Episcopal schools did not reply to ENS inquiries asking for comment, including Episcopal School of Jacksonville, Florida, where the head of school was shot in 2012, in a murder-suicide by a recently fired teacher.

However, the National Association of Episcopal Schools has reached out to school leaders and heard from a number of them that they will be traveling by bus to either to New York or Washington D.C. for marches on March 24, said Jonathan Cooper, the association’s communications manager. St. Stephen’s Episcopal Day School, a pre-K3 through fifth-grade school in Coconut Grove, Florida, is sending hand-drawn cards to the older students at Marjory Stoneman Douglas High School, he said. 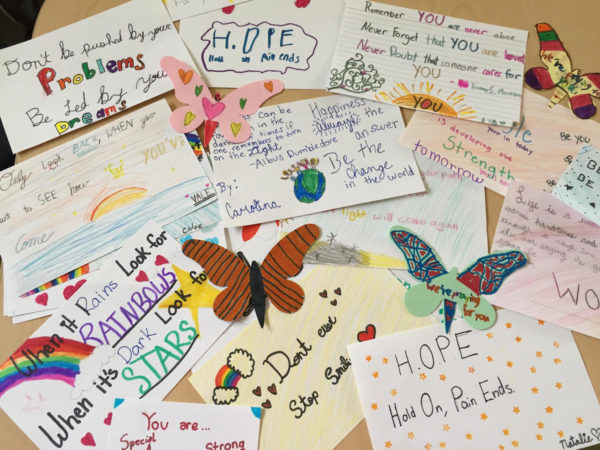 Here are some of the hand-drawn cards that students at St. Stephens Day School, a pre-K3 through fifth-grade school in Coconut Grove, Florida, are sending to the older students at Marjory Stoneman Douglas High School. Photo courtesy of National Association of Episcopal Schools

Leaders in the Diocese of Washington and Washington National Cathedral are trying to connect out-of-town Episcopal youth groups, clergy and lay leaders who want to bring students to the March 24 rally with hospitality and lodging with their local churches and members.

“Like so many people across the country, the members of Bishops United Against Gun Violence are enormously grateful to the young people of [Marjory] Stoneman Douglas High School and their peers across the country, who are leading a renewed movement to end gun violence in this country. We are committed to standing in solidarity and anguish with them and supporting their efforts,” Stokes said.

On the same day as the planned school walkouts March 14, at least seven dioceses are hosting Day of Lamentation services, also organized by members of Bishops United Against Gun Violence. Trinity Episcopal Cathedral, in Trenton, New Jersey, will be the site of a 12-hour service of prayer and fasting.

As head of Episcopal Peace Fellowship, the Rev. Allison Liles has a weekly conference call with about 50 national gun-violence-prevention groups. The fellowship has been working extra hard for this cause the last five years, since Sandy Hook, she said.

“But this particular school shooting in Florida has sparked something in the country that hasn’t happened before. I think we’ve moved past despair and sadness and straight into anger and action,” Liles told ENS. “And that’s been the case for a lot of Americans.”

Liles’ 87-year-old grandmother called her the day after the Parkland shooting from her Alabama home, after seeing a woman with the ash cross on her forehead doubling over in grief. The Feb. 14 shooting was Ash Wednesday, as well as Valentine’s Day. Her grandmother, a lifelong Republican NRA-supporter wanted Liles to send her sermons and talks about gun violence.

“We’d always agreed not to talk about certain issues, this being one them,” Liles said. “Hearing that from her, asking me to help her work for change, made me realize something is different this time.”

Her fellowship’s website offers 10 steps a church can take to reduce gun violence, as well as liturgies on gun violence that clergy and lay leaders can adapt for their own sermons and talks.

Before Liles, her husband and two children moved to Dallas, Texas, in August, they lived in Virginia, where every year on Martin Luther King Day since they were in strollers, she brought her children to an interfaith vigil, rally and lobby day on the Richmond capitol lawn. They would pray on the capital lawn and then meet with lawmakers about preventing gun violence.

“We believe it’s really important to raise kids who know how to pray with their feet. We want to live out our faith not only at home and church, but in the public sphere,” Liles said. 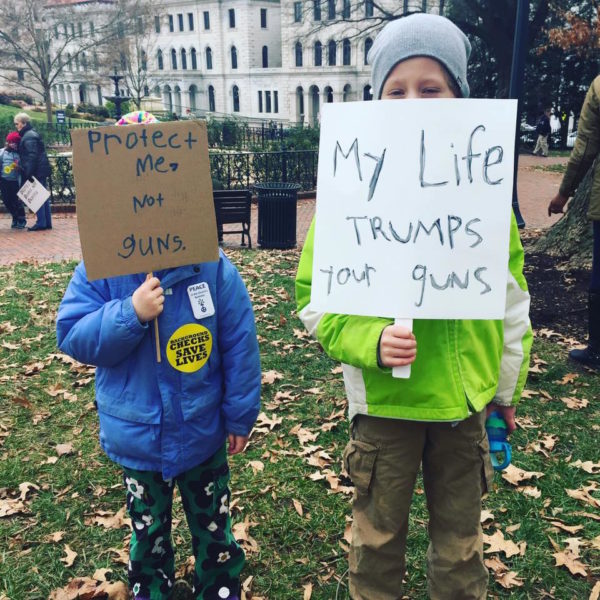 The Rev. Allison Liles, executive director of Episcopal Peace Fellowship, took her kids, Pailet, 6, and son Hill, 9, to gun-violence prevention rallies every Martin Luther King Day at the capitol in Richmond, Virginia, when they lived nearby, to teach justice advocacy from the start. Photo: Rev. Allison Liles

These days, when she or her husband drop off their daughter, Pailet, 6, and son Hill, 9, at school, they emphasize safety in their daily prayers for their children. Liles urges people to overcome their fear of broaching such a controversial issue in church, where many believe politics should be avoided.

“But it’s a matter of life and death, so it’s a matter of faith, and it’s up to us to take away the stigma that says gun violence is not a something we can talk about in churches,” Liles said.

Victoria Hoppes, coordinator of ministries with and for youth in the Diocese of Indianapolis, is helping teens such as Jacobs organize the trip to Washington D.C. Since this movement started, all the diocesan youth ministry coordinators have been in conversation about it, Hoppes said.

“I think we are working with a generation that wants to see positive change and is willing to be a voice for positive change. And we don’t always give them a voice and space to take action. This is a youth movement, so we need to make space for them to lead,” Hoppes told ENS.

The desire to do something is coming directly from the teenagers and isn’t instigated by adults, she said.

The words and actions of Episcopal youth are showing adult Episcopalians how to live out the baptismal covenant in the world, church leaders say.

“I’m really grateful our kids are in churches that recognize that they’re not too young to be concerned,” Liles said. “That’s the narrative that the Florida students are showing. They’re young, but not too young to show concern. Their voice matters.”

— Amy Sowder is a special correspondent for the Episcopal News Service and a freelance writer and editor based in Brooklyn. She can be reached at amysowderepiscopalnews@gmail.com. Editor Mary Frances Schjonberg contributed to this report.