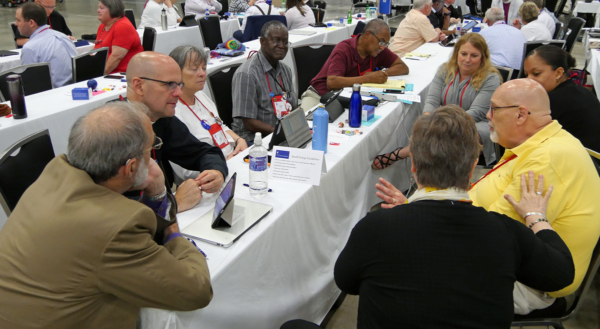 Members of the Diocese of Newark converse with each other July 6 during the 79th General Convention’s first TEConversation. Racial reconciliation was the topic of this joint session. Photo: Mary Frances Schjonberg/Episcopal News Service

[Episcopal News Service – Austin, Texas] One of the unique offerings at this triennium’s General Convention are TEConversations (The Episcopal Church Conversations), which are being held during three joint sessions of the House of Bishops and the House of Deputies over the coming week. Each conversation offers multiple speakers, video presentations and engaging interludes around three priorities of this gathering: racial reconciliation, evangelism and care of creation.  Speakers represent international leaders, well-known Episcopalians, and rising voices in the Church.

The first of these, A Conversation on Racial Reconciliation, opened at 10:30 a.m. July 6.

“This day is designed for you. This day is for everyone to learn and be included. A day of listening. A morning of conversation. A day of learning. As you listen to the speakers remember that everyone matters,” said the Rev. David Crabtree of North Carolina, moderator of the July 6 conversation.

Speakers for the first TEConversation took a deep and personal look at racial reconciliation.

A reformed, former leader of a worldwide racist skinhead organization, Arno Michaelis kicked off the presentations. “Hate ruled my life,” he said. As the former leader of the largest racist skinhead nation in the world for seven years he speaks of hate and violence as an all-consuming a way of life. Meeting Pardeep Kaleka, the eldest son of Satwant Singh Kaleka – the president of the Sikh Temple of Wisconsin, who was gunned down during the attacks of Aug. 5, 2012, changed Michaelis’ life. Together they started Serve to Unite https://www.giftofourwounds.com/serve2unite/  in response to the August 5, 2012, attack. Through this organization they “wage peace” and invite others to join them.

Channeling peace, love and especially the “double-edge sword of forgiveness and compassion” Michaelis also works to get people out of organizations like the KKK. Through this practice of nonviolence he told the story of “saving” a father and son from that life.  The Imperial Grand Wizard of the Georgia Klan also burned his robes and left that life. “Hate and violence can be stopped by forgiveness and compassion.” He said that if he had been violent in response to their anger they would likely still be in the KKK. 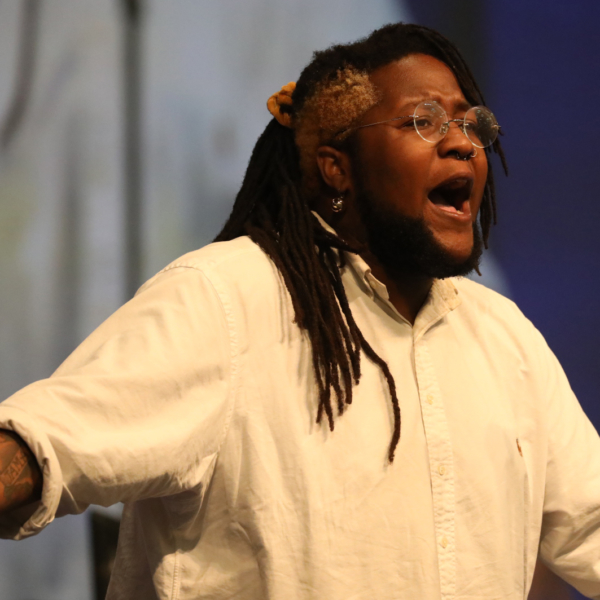 The scheduled speakers were punctuated by a special guest: Local Austin poet, Charles Dawain Stephens, aka Chucky Black, recited his poem “Black Magic” about the goodness and magic he sees in his people that help him through the dark times.

The next speaker, Dr. Catherine Meeks, director of the Absalom Jones Episcopal Center for Racial Healing in Atlanta, Georgia, is committed to helping people find the best parts of themselves. She told participants from her seat on the stage that “love and acceptance are the simple message (of reconciliation) but we are always looking for something more complicated.”

She urged people, “Do not leave this place and act the same way you acted when you got here. We need to make differences in ways that are concrete and take away the constructs that divide us.” 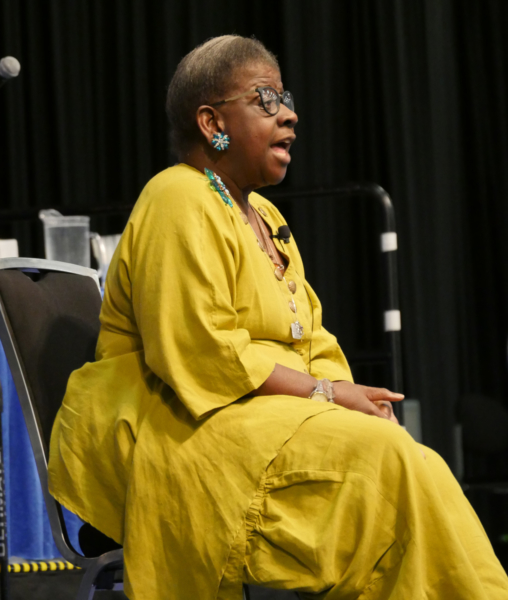 In a video presentation the question – What is A Beloved Community? – was answered by people representing the diversity of the Episcopal Church. Some of their responses:

The Rev. Nancy Frausto, a native of Zacatecas, Mexico, and DACA (Deferred Action for Childhood Arrivals) beneficiary priest was the morning’s final speaker. Frausto is a dreamer, “which means I entered the country illegally. I ran … and hid … to be reunited with my father.” She was 7 years old when she came to this country and a beloved community is something she desperately wants.

“Imagine working toward a beloved community. You have to work toward racial reconciliation. To get there you have to talk about truth.” It is about the entire system, according to Frausto. If we truly care about the dreamers, then we must care about the parents – the original dreamers, and the children in the camps today, and the black boys and girls in the neighborhoods, and all those who are marginalized. 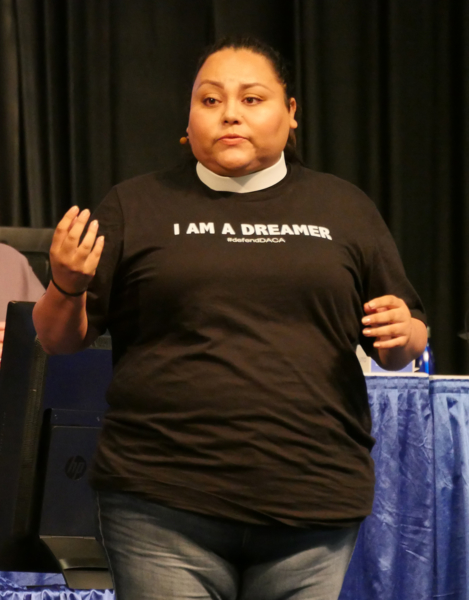 The Rev. Nancy Frausto of the Diocese of Los Angeles is a native of Zacatecas, Mexico and a DACA (Deferred Action for Childhood Arrivals) beneficiary. Photo: Mary Frances Schjonberg/Episcopal News Service

Frausto closed with the story of Jesus and Lazarus when Jesus said to the people, “Unbind him. Let him go.” She went on to say, “Imagine us unbinding this country from racism. We have a lot of work to do. … We do need to love one another. As you leave General Convention make sure you do the work tell the truth and unbind this country.”

About 30 minutes of discussion that asked participants to take a deep and personal look at racial reconciliationfollowed the presentations. Deputies and bishops were asked to “explore personal and communal hopes for living as the Jesus Movement and sharing in loving, liberating, life-giving relationships with God, each other, and the earth.”

During that time people first sat in pairs, and then in groups. These were generally made up of one or two diocese’s bishops and deputies. An Episcopal Church staff member noted that some groups included their alternates in the discussion, although rules about who can be on the floor at a given time made this tricky.

In an email following the TEConversation, Deputy Stewart Lucas of Maryland shared a comment he had made as part of their discussion. “We must just be ourselves, especially when we are in a minority. All we can do is share our story and our pain and our journey. Relationships change opinions and deeply held values. Those of us in a majority who are privileged in many ways have a baptismal responsibility to find and listen to the story of the ‘other,’ ”

As the deputies and bishops left the floor of the House of Deputies they shared their reactions from the first TEConversation.

Deputy Krisita Jackson of Central Florida said, “Conversations need to be continued. Reconciliation is tough work and requires a lot of looking into oneself, finding the truth and speaking the truth.”

Bishop Greg Brewer, also of Central Florida, was energized by the session. “I welcome it. These conversations are absolutely necessary if we are going to go from racial enclaves to reflecting the multi-racial Jesus Movement that the presiding bishop envisions.” He added that he appreciated the diversity of the presentation, “from hip-hop to Dr. Meeks sitting down and talking to us.” And, he said that he looks forward to the next conversation.

Jackson also commented that the presenters were relevant and that she appreciated hearing views from a cross-section of the Church. “It wasn’t a narrow focus. It’s a problem about all people.”

Each TEConversation will be available live so people can participate concurrently with deputies and bishops. Each will also be available online, with support materials, for local use in churches at a later date. Participants can also text 51555 to share resources, ask questions, and continue the conversation. On social media #belovedcommunity and #jesusmovement and #gc79 can be used to share thoughts and ideas.

– Sharon Tillman is a freelance writer and a member of the ENS General Convention reporting team.