[Episcopal News Service] Top administrators and faculty members at Sewanee: The University of the South are recommending that the university rescind journalist Charlie Rose’s honorary degree in the aftermath of a sexual harassment scandal, and they are pushing for new procedures to guide reconsideration of such degrees after they have been awarded.

The University Senate – which includes the vice-chancellor, provost, chaplain, deans and all full professors – voted unanimously Feb. 26 to approve an advisory motion asking Sewanee’s Board of Regents to revoke Rose’s honorary degree. The regents had decided earlier this month to let Rose keep the degree.

No official statement was immediately available from the Board of Regents. A university spokeswoman said the regents may be called together at any time by the chair to consider the Senate’s motion.

Vice-chancellor John McCardell Jr., in announcing the Senate’s actions, affirmed the university’s stance “against sexual misconduct of any sort on campus and in the workplace,” and he alluded to the growing controversy over the university’s lack of action against Rose.

“This past week has made us all painfully aware of both our institutional aspirations and the ways in which we still fall short of meeting them,” he said in a letter addressed to the university community. “I pledge my own continued involvement and energy in articulating and advancing those aspirations, civilly and respectfully, and those many things we need yet to do to bring us closer to their attainment.”

Rose, known for his work as host of “Charlie Rose” on PBS and Bloomberg and co-anchor on CBS’ “This Morning,” was dropped in November by all three broadcasters after the Washington Post reported on eight women’s allegations that Rose had made unwanted sexual advances toward them, including lewd comments, groping and walking around naked in their presence.

Rose issued an apology for his “inappropriate behavior” and admitted he had “behaved insensitively at times,” though he also disputed the accuracy of some of the allegations. He was one of a series of prominent men from the world of entertainment, media and politics to suddenly fall from grace last year amid allegations of sexual misconduct.

My statement in full. pic.twitter.com/3kvFrqF2dT

Sewanee, which is owned and governed by 28 Episcopal dioceses, presented Rose with an honorary degree when he delivered the university’s commencement address in spring 2016. After his career was derailed by scandal, pressure mounted at Sewanee to revoke the degree. Two student trustees wrote to the Board of Regents earlier this month recommending that action, but the regents rebuffed such calls, saying, “we do not believe it is our place to condemn the individual.” 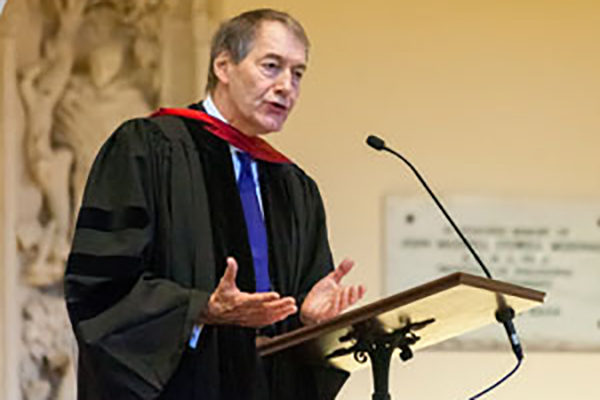 Charlie Rose delivers the commencement address in May 2016 at Sewanee: The University of the South. Photo: Sewanee

The regents also defended their decision by saying it was in keeping with a spirit of Christian forgiveness. Those arguments prompted a rebuttal from eight professors in the School of Theology, who released a letter Feb. 19 calling for the university to take the degree back “to demonstrate in symbol and in substance that it respects the dignity of every human being.”

A complication in the debate, as McCardell noted in his statement, is that the university doesn’t have a clear process for reconsidering an honorary degree. The University Senate, which has the power to recommend individuals to be honored, also voted on Feb. 26 to instruct its Honorary Degree Committee to draft procedures that can be discussed and acted upon.

“As a result, there will be a process, where none had existed, for the orderly review of an honorary degree once awarded,” McCardell said. That process, too, will need to be approved by the Board of Regents before taking effect

Four Episcopal bishops and three Episcopal priests sit on the 20-member Board of Regents, including Florida Bishop Samuel Howard, who serves as an ex officio board member because of his position as Sewanee chancellor.