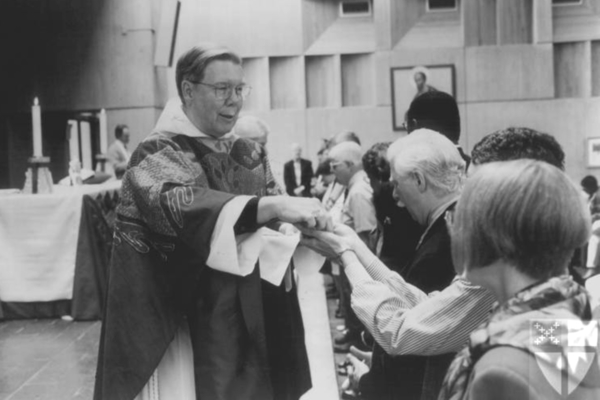 The Rev. Donald Nickerson celebrates the Eucharist in Burlington, Vermont, in June 1998 during his last Executive Council meeting as executive officer and secretary of General Convention. Photo: Episcopal News Service

[Episcopal News Service] The Rev. Donald Nickerson, who served as The Episcopal Church’s executive officer of General Convention from 1986 to 1998, has died. He was 80.

Nickerson, a lifelong New Englander, died Dec. 9 after a 33-year struggle with Parkinson’s disease. In retirement, he and his wife, Susan Martin, continued to attend services at St. Paul’s Episcopal Church in Brunswick, Maine, where Nickerson had served as rector for 12 years in the 1970s and 1980s.

“He was a pastor’s pastor and mentored hundreds of people to be leaders of the gospel, both within and beyond the church,” Maine Bishop Thomas Brown said Dec. 11 in a diocesan news release announcing Nickerson’s death. “It is not too much to say we’ve lost a giant.”

Nickerson’s service across four General Conventions earned him loving praise at the time of his retirement in 1998. “I think maybe his greatest gift is that he is a wonderful communicator,” Browning said then. “When he went out to visit the dioceses to talk about General Convention … he was received with a lot of thankfulness. He helped a lot of people have a better appreciation of what [convention] was all about.”

Pamela Chinnis, who was House of Deputies president in 1998, joined Browning in praising Nickerson as “a very steadying influence” during a time of change in The Episcopal Church, particularly as it grew more welcoming to LGBTQ members and shifted toward allowing the ordination of gay and lesbian clergy. 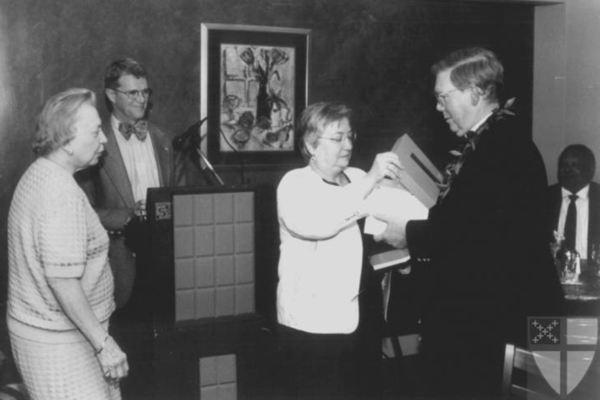 The Rev. Michael Barlowe, who now fills the executive officer role once held by Nickerson, spoke highly of his predecessor in a written statement to Episcopal News Service.

“Don served with distinction as secretary and executive officer of the General Convention during some of the most challenging times in the life and governance of the church,” Barlowe said. “He mentored many of the today’s senior leaders of The Episcopal Church, and was known for his fairness, civility, and wisdom.”

Nickerson grew up on the North Shore of Massachusetts and attended summer camp in Maine at Camp O-AT-KA, founded by an Episcopal priest on Lake Sebago in 1906.

Nickerson and his wife met there and in 1962 were married at the camp’s St. Andrew’s Chapel, according to the Diocese of Maine. In retirement, the couple continued to return to the camp each year “for fellowship and renewal.” 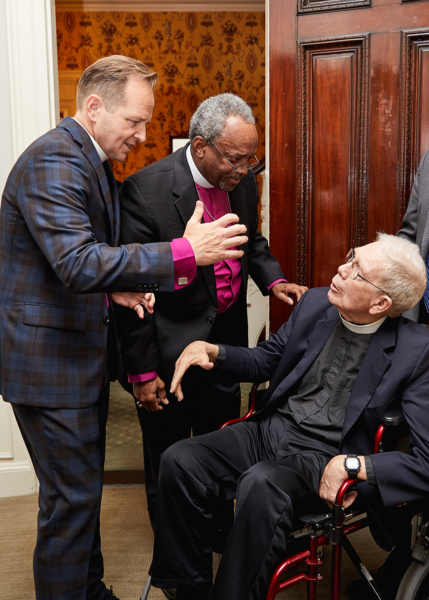 Presiding Bishop Michael Curry meets with the Rev. Donald Nickerson, right, in June 2019 while in Maine for the consecration of Maine Bishop Thomas Brown, left. Photo: Alice and Chris Photography, via Diocese of Maine

A graduate of Springfield College and Berkeley Divinity School, Nickerson was ordained in 1964 as a curate at Trinity Church in Newton Centre, Massachusetts, and he later served as rector of Christ Church in North Conway, New Hampshire, before moving to Maine in 1974.

“A deeply spiritual person, Don served the Church faithfully and in many capacities,” Presiding Bishop Michael Curry said in a written statement. “He was generous in forming leaders and devoted to his family. He lived the way of Jesus through a life shaped by faith, hope and, above all, love.”

Brown recalled sharing a moment with Nickerson on a deck overlooking Lake Sebago during the past summer, when Nickerson said, “The church has been good for me and my family.”

“We join The Episcopal Church in the chorus that sings, ‘Well done, thou good and faithful servant,’” Brown said.

Nickerson’s funeral will be 11 a.m. Dec. 28 at St. Paul’s in Brunswick. A private burial will follow at Kearsarge Cemetery in Kearsarge, New Hampshire.