The Rev. Fred Brown: a study in prayer, faith, courage and strength 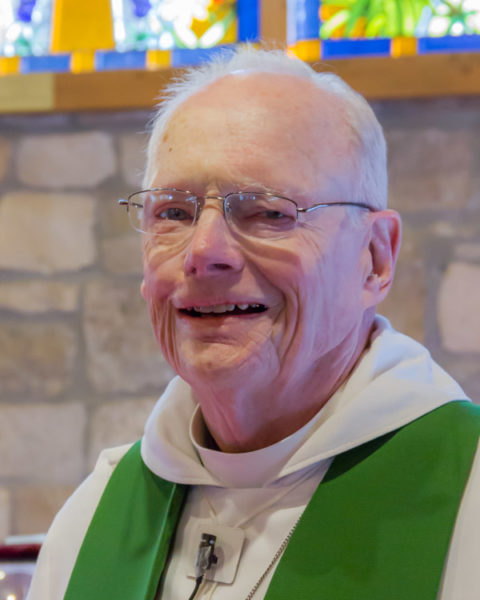 The Rev. Fred Brown says he was once mad at God, but now has made his peace.

[Episcopal Diocese of West Texas] In April 1963, nearing the end of a 10-day leave from his U.S. Navy SEAL team unit stationed in the Mediterranean Sea, Lt. Fred Brown swung into Rotterdam to buy a diamond engagement ring to slip on his fiancée’s finger when he returned to the states in a few weeks.

He didn’t get a ring but he did find a reconditioned World War II Harley-Davidson he had to have. “I should have bought a ring instead,” he said.

Setting out for Barcelona to meet his ship, he “made it only to the Belgium border with France. That’s where I hit the fog bank. I couldn’t see and was trying to get off the road. Well, a guy in a car couldn’t see me either.”

The car T-boned him, sending the motorcycle and Brown into a fiery explosion. A bystander pulled Brown from the wreckage, wrapped him in his overcoat and extinguished the flames.

Three days later, Brown regained semi-consciousness in a Belgium hospital, suffering from near blindness and third-degree burns covering half his body. “That was pretty much a death sentence in those days,” he said.

Now vicar of St. Michael and All Angels Episcopal Church in Blanco, Texas, Brown’s story of recovery is a story of the power of prayer, faith, personal courage and the physical strength required for his rehabilitation.

Brown remained in and out of a coma for six weeks and lost 60 pounds, going from a fit Navy SEAL weight of 155 pounds to a bag of bones weight of 95 pounds. His injuries were so severe that the doctors planned to transfer him to the burn unit at Fort Sam Houston in San Antonio. His flight made it only to the East Coast.

“They thought I’d die before I got to Fort Sam,” he said. “They stopped the plane and put me in the hospital at St. Albans.”

As he drifted in out and out of consciousness, “I’d reflect on the liturgy, bits and pieces of it. The liturgy was a source of strength for me.”

For spiritual strength, he especially relied on the 23rd Psalm. “That was something I recited quite a bit, ‘the valley of the shadow of death, I will fear no evil.’ It was funny how those things came out of my subconscious mind.”

Meanwhile, in Houston, his mother enlisted her interdenominational prayer group of some 200 women. They were also part of a larger chain, which multiplied the numbers praying for Brown’s recovery. “They were real prayer warriors,” he said. “I could feel their power. I think it had a very large influence in my ability to withstand six weeks of 105 degree temperature and finally come out of it.”

His mother even sat beside him for hours in the hospital. At one point, she asked if he would like her to read from a novel. He shook his head and pointed to the Bible. There he found inspiration from Biblical characters who overcame their own hardships, such as David facing Goliath and Samson asking for a last ounce of strength.

Fighting the infection which ravaged his body also called upon the physical strength and mental toughness Brown had developed as a track and swimming athlete at the University of the South and his grueling training as a Navy SEAL.

What about his bride-to-be?

Sue Parker lived in Roanoke, Virginia, and frequently visited him in the hospital over the weekend. When they decided to proceed with a wedding, a hospital chaplain approached Brown.

“Has she seen you?” the chaplain asked, referring to his burn injuries.

“’Well, yeah,’ I said. ‘She’s been visiting me in the hospital. When she first saw me, I looked worse than this.’”

They were married almost a year to the day of his accident. “I had to check out of the hospital to go to Roanoke for the wedding,” he said.

He was discharged from the hospital a year later and retired from the Navy.

Although he considered entering the ministry, “I was still pretty beat up” and figured it would be easier “to go to law school and ease myself into law practice with my dad. I just didn’t feel ready to take on a church. I was still in recovery.”

So the son of a Houston attorney entered law school though “the doctors had warned me not to do because of the head injury and operations I’d had. They said it would take about five years to get recovered enough to go to any kind of graduate school.”

But his “grades kept drifting to the level of probation. I ended up finally at St. Mary’s University law school in San Antonio in 1968” but started using a tape recorder to capture lectures. Severe injuries to his hand made it hard for him to take notes and seared tear ducts continually blocked his eyes and impaired his reading.

With the technical aid, however, “I finally started making good grades. I figured it out that it was exactly five years after my accident. Those doctors were right. It was five years before I could finally handle that load of work.”

In 1989, after practicing law with his father for 25 years, he entered a seminary program in Houston and soon found himself in a Harris County jail facility.

A friend suggested that he volunteer to lead chapel services there to learn how to relate to “people who are really down and out.” At first, he had lay members helping with the service but they quickly dropped out. “They didn’t like being crowded in there with that many criminals,” he said.

He ended up going by himself every week for six years. “Every Sunday when I’d go out there I’d sit in my car and spend a few minutes praying to get up the courage to go in. There were at least four doors that clanged shut behind you as you made your way to the chapel. That was always unnerving.”

The guards told him he was wasting his time trying to help the prisoners, but Brown got several into Episcopal rehabilitation programs and jobs after they had served their sentence.

The Browns joined St. John the Divine Church in Houston where he served 15 years as a mentor or leader of the Education for Ministry program offered by the University of the South. The EFM is a four-year distance learning certificate program in theological education based upon small group study and practice to help individuals discern their call to Christian service.

“I had made some reflective witnessing at church before that, but it was pretty limited. It was hard to talk about it. It was upsetting. But after reflecting on it theologically, I would talk about it at length and see the benefits of being able to reflect on it. “

The first exercise of the EFM program is “a reflection on your biography, on your past and what got you to this point. For some people they could not talk about it without bursting out in tears. So, I’d tell my story first in the goriest details possible.”

“I could really relate to guys from Vietnam or that I met in the hospital that had what we now call PTSD, what they called then shell shock. I could relate to that. How you deal with serious trauma is how the rest of your life is going to pan out,” he said.

“If you’ve got a strong person like Sue to help you deal with it you are very fortunate,” he said. “A lot of people don’t have that. I had a lot of strong family ties. That’s helpful, the ones who will listen to you anyway. You survive better with a group after a serious trauma. That’s what I was trying to impress on them in Education for Ministry.”

His sermons today are filled with vignettes of his own life and trauma and his own relationship to the struggles of Biblical characters, an obvious influence of his years in the Education for Ministry experience.

One Sunday morning, reflecting on Peter asking Jesus how many times should a sinner be forgiven, Brown declared “I was mad at God” following his accident. “But even more, I was mad at myself. I implored God for healing, but it wasn’t happening. I was getting weaker. Finally, I turned my anger at myself over to God. Suddenly, I was free to be healed, free to receive the forgiveness that I had been blocking out.”

After finishing seminary, he did extra year of graduate theological work at the Graduate Theological Union in Berkeley, California where he focused on Anglican studies. He was ordained as a deacon in 1996 and ordained as a priest in January 1997 at age 58. “I was a late bloomer,” he said.

Brown has served Episcopal churches in East Texas, three years in Northern California near relatives, served as assistant minister at St. Helena’s in Boerne and served as an interim at St. Elizabeth’s in Buda, Grace Episcopal in Llano, St. Christopher’s in Bandera, St. Andrew’s in Seguin, St. Margaret’s in San Antonio and a “few weeks in Corpus Christi.”

“He’s a remarkable man, a remarkable priest,” said the Rt. Rev. David Reed, bishop of the Episcopal Diocese of West Texas. “He’s a kind and gentle person. His pastoral abilities run deep. It could be his own injuries and suffering that have given him that kind of heart” to be such a compassionate person.

Brown, 79, lives in Boerne, Texas. His wife, who stood by him throughout his recovery, died in October 2014. They had four children.

And once almost given up as dead, he has since run 11 marathons.

— Mike Patterson is a freelance writer, a frequent contributor to the Church News and member of St. Michael and All Angels Episcopal Church in Blanco.