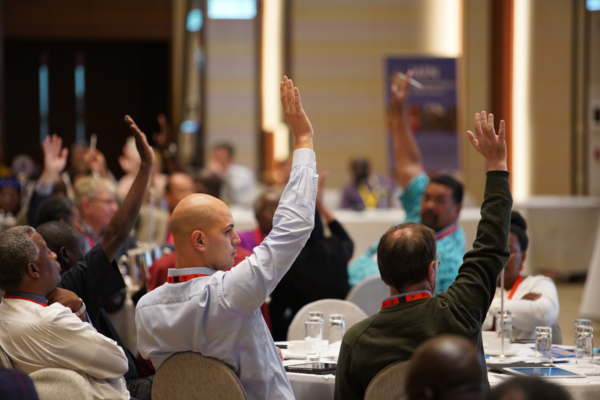 Anglican Consultative Council members raise their hands May 4 in a rare actual vote on a measure. Most resolutions were passed by “general consent” or “general assent,” rather than by a show of hands. Photo: Neil Vigers/Anglican Communion News Service

[Episcopal News Service] During long days of reports and discussions, often at a rushed pace, the 99 members of the Anglican Consultative Council who met in Hong Kong for its 17th meeting set the Anglican Communion’s mission and ministry agenda for the coming years.

Amid concerns about process and unity, the ACC spent April 28-May 5 considering work in three categories: the Five Marks of Mission; issues of unity, faith and order; and governance. In the end they passed 24 resolutions.

The members also made “public statements” about the Easter Day terror attacks in Sri Lanka; the disasters left in the wake of Cyclones Idai and Kenneth in eastern Africa; and about on-going peace and reconciliation efforts in South Sudan, Pakistan and India, and the Korean peninsula. 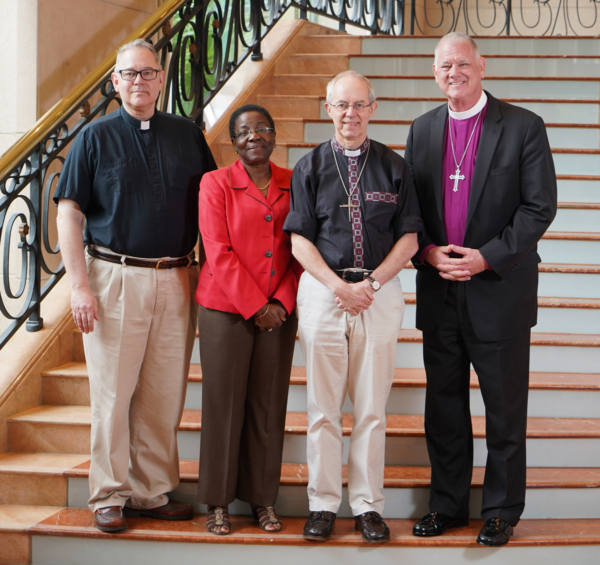 That language went too far for some. After more than two hours of frank debate and intense negotiations the result was a completely rewritten resolution which “noted with concern” Archbishop of Canterbury Justin Welby’s 2020 Lambeth Conference decision about bishops who are in same-sex relationships and requesting him to renew the communion’s 21-year-old promise to listen to the experiences of LGBTQ people. Concerns have been raised in the communion both about Welby’s refusal to invite the same-sex spouses of bishops and his decision to invite those bishops themselves. The latter is departure from the previous Lambeth Conference.

“It is easy to let one disagreement dominate but, the reality is we only care enough to disagree because Jesus has made us one,” Welby said during his closing address later that same day.

“There are all kinds of things that we’ve gotten wrong this week – plenty that I’ve gotten wrong – but here we are at the end of the week and under the grace of God we are called to go out now and change the world, to go on changing the world, in the power of Jesus Christ, carrying out the mission of God, bringing in the kingdom, all of you with each other and loving one another because we are family. In a divided world what more precious gift can we bring than one that respects diversity, loves one another and provides hope.” 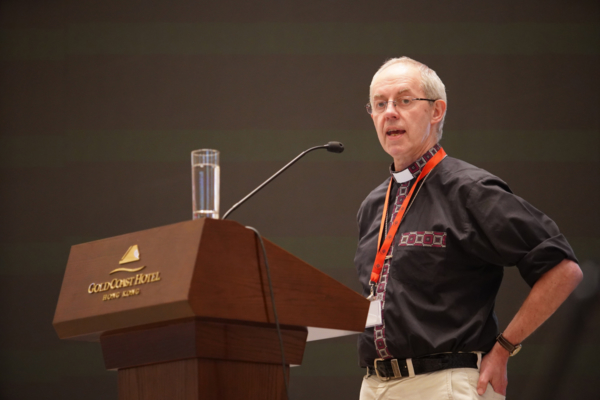 “We are called to go out now and change the world, to go on changing the world,” Archbishop of Canterbury Justin Welby tells members of the Anglican Consultative Council during his May 4 closing address. Photo: Neil Vigers/Anglican Communion News Service

* calling for continued support of the colleges and universities of the Anglican Communion (A17.01);

* affirming support of the International Anglican Women’s Network and women’s ministries (A17.02);

* affirming that gender justice and equality are an inherent part of intentional discipleship embedded in the Gospel and rooted in Christian values of human dignity, justice, and love; commending for use “God’s Justice: Just Relationships between Women and Men, Girls and Boys,” requesting member churches to involve men, boys, women and girls in building mutually just and equitable relationships in families, churches and other communities, and encourage shared decision-making and leadership (A17.03)

* welcoming and supporting the work of the International Anglican Family Network (A17.04);

* recognizing that there is a global climate emergency, encouraging member churches to make the Fifth Mark of Mission (To strive to safeguard the integrity of creation, and sustain and renew the life of the earth) “a living testament to our faith,” and encouraging the Lambeth Conference 2020 to be as environmentally sustainable as possible (A17.05);

* celebrating the work by some member churches and the Anglican Communion Environmental Network to shift messaging and action from climate vulnerability to climate resilience, and express regret about the ongoing impacts of climate change (A17.06);

* calling for work to develop an Anglican Health Network (A17.07);

* noting with concern the pattern of invitations to the Lambeth Conference 2020, requesting the archbishop of Canterbury ensure that a listening process is put in place with supportive and independent facilitation in order to hear the concerns and voices of people especially those who have felt themselves marginalized with regard to sexuality, as well as compiling all the work done in this area across the communion since Lambeth 1998, and requesting the archbishop of Canterbury look at all issues of discrimination across the communion to make recommendations to the Standing Committee and to report to ACC18  (A17.08); 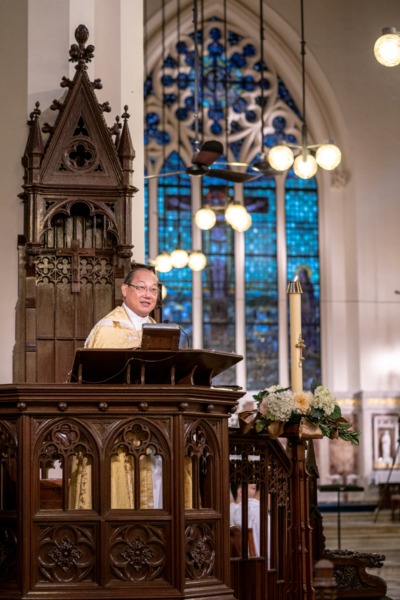 * encouraging networks to improve theological education in the Anglican Communion (A17.09);

* affirming the work of the Anglican Alliance and encouraging provinces to support it (A17.10);

* encouraging member churches and communion agencies to continue and extend their work to achieving the United Nations Sustainable Development Goals, requesting  that the Secretary General reports to the Standing Committee, no later than its first meeting in 2020, on a 10-year strategy on communion engagement with the goals (A17.11);

* commending the emphasis on intentional discipleship and disciple-making in the Anglican Communion Office’s Strategic Plan and asking the Mission Department to develop a resource hub “to support and equip the culture change in the communion towards intentional sharing and living a Jesus-shaped life” (A17.12);

* encouraging further engagement with the Five Marks of Mission, repentance when people have fallen short of being true disciples, amend their lives accordingly and make a greater commitment of prayer for the redemption and salvation of the world and all its people (A17.13);

* reiterating past statements on the development, use and impact of nuclear weapons; lamenting the lack of justice for those communities most impacted by testing of nuclear weapons; acknowledging the work of member churches and the World Council of Churches on these issues; requiring the Secretary General to report on the implementation of the commitments made in past resolutions; requesting the Standing Committee to ensure that ACC18 develops a contemporary Anglican response to these issues (A17.140;

* encouraging member churches to invest in pathways to education and employment for young laypeople. (A17.15).

* approving a new Anglican Communion process for receiving ecumenical texts developed out of its dialogues with other Christian traditions (B170.4);

* recognizing the failures of the past and determined that every church in the Anglican Communion is a safe place for everyone, especially children, young people and vulnerable adults; approving the “Guidelines to enhance the safety of all persons – especially children, young people and vulnerable adults – within the provinces of the Anglican Communion;” requesting member churches and extra-provincial churches under the direct metro-political jurisdiction of the archbishop of Canterbury to take specific steps (outlined in resolution’s text) toward this end; requesting the Secretary General to reconstitute the Anglican Communion Safe Church Commission. (C17.01);

* welcoming an outline budget structure for 2020–25 for improved financial planning and transparency by the Anglican Communion Office (ACO) and the commitment of the ACO to seek to maximize voluntary income from sources beyond member churches, reaffirming ACC resolutions calling on all member churches to contribute to the Anglican Consultative Council budget, endorsing proposed formula for member church contributions, encouraging member churches to discuss the formula with the ACO during 2020–2022, requiring the Secretary General to report annually on implementation of the formula (C17.02);

* calling on member churches to consider the appointment of a young person as one of its ACC members from ACC18 onwards, encouraging the inclusion of young people in the work of Anglican Communion networks, encouraging member churches to include youth representation in their synods (resolve to guarantee one Standing Committee place for an ACC youth representative was defeated) (C17.03); and

* approving the 2019-25 Strategic Plan for the ACO serving the Anglican Communion and its member churches, requesting member churches to engage with the ACO to implement the plan, requiring the Secretary General to report on the implementation to the Standing Committee at least annually, requiring periodic reviews by the Standing Committee and explaining any changes to the next ACC meeting (C17.08).

The texts of some of the 24 resolutions are posted here, where the rest are due to be posted soon. Written versions of all the reports given to ACC-17 are here.