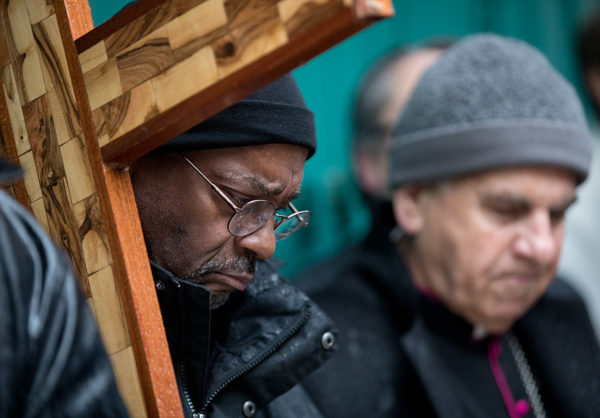 Presiding Bishop Michael Curry carries the cross while he and other pilgrims walk the Via Dolorosa in Jerusalem on Good Friday. Photo: Ben Gray/ Evangelical Lutheran Church in Jordan and the Holy Land

[Episcopal News Service – Jerusalem] The cold early-morning rain that fell here on Good Friday seemed to blur the lines between Christian denominations and make clearer the united Christian witness in the Holy Land as pilgrims huddled together in the wind to retrace Jesus’ road to Calvary along the Via Dolorosa.

Among them were Presiding Bishop Michael Curry and those traveling with him on a Holy Week pilgrimage. With the skies alternating between threatening and bright, the pilgrims walked gingerly along the rain-slicked limestone pavement that has been worn smooth by centuries of Christian devotion. Cassock hems sometimes dipped into the many puddles along the way, making for a cold and wet experience as the rainwater soaked in. 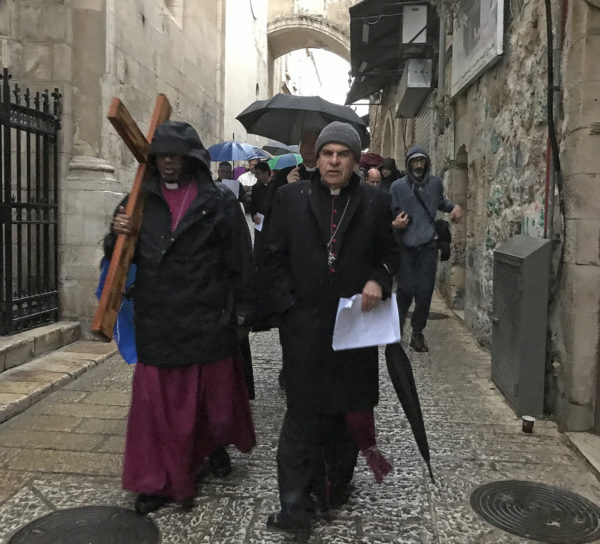 Every year the Good Friday ritual is re-enacted in the midst of everyday life in the old city. Shopkeepers were slowly opening their sweet shops, bakeries and souvenir stores. Religious icons and jewelry and vestments were for sale next to butcher shops and hair salons. Feral cats scrounged for food. Trash collectors carefully drove their motorized carts down the narrow pilgrim-lined streets. A police officer joined the procession as a guide.

Members of the Episcopal Diocese of Jerusalem and the Evangelical Lutheran Church in Jordan and the Holy Land join each year to walk the way of the cross.

At each stop a pilgrim read from the Bible and others led prayers for themselves and others. The pilgrims sang hymns as they walked between each station. Curry and the Most Rev. Suheil Dawani, the Anglican archbishop in Jerusalem, were among those carrying the cross during the walk.

Among the many prayers for others were:

Among the prayers the pilgrims prayed for themselves were:

The Anglican and Lutheran pilgrims, along with representatives of other Christian faiths, then ate a simple breakfast at the Lutheran Church of the Redeemer near the end of the Via Dolorosa.

Newly installed Lutheran Bishop Ibrahim Azar had joined the walk and then welcomed the pilgrims to the church. “It is a delight to be together as the family of Christ,” he said. “We hope and we pray that our Lutheran and Anglican relationship will deepen through our love, our worship and our actions.”

Azar later preached at the traditional Good Friday liturgy at the Anglican Cathedral Church of St. George the Martyr. 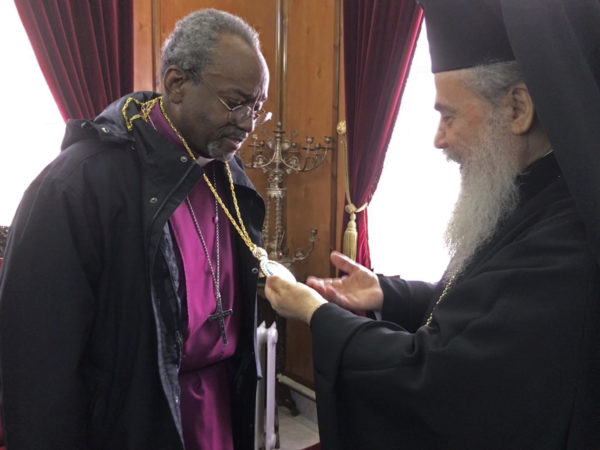 His Beatitude Theophilos III, Patriarch of the Holy City of Jerusalem and All Palestine, presents a pectoral icon to Presiding Bishop Michael Curry during a visit to his offices in the Church of the Holy Sepulchre on Good Friday morning. Photo: Mary Frances Schjonberg/Episcopal News Service

Also on Good Friday, His Beatitude Theophilos III, Patriarch of the Holy City of Jerusalem and All Palestine, welcomed Dawani, whom he called “our brother;” Curry and the group traveling with him to his offices in the Church of the Holy Sepulchre.

“Your visit is encouraging us to maintain the Christian character of Jerusalem,” Theophilos told Curry, describing the city as “multinational, multicultural and multireligious.”

The patriarch said he believes that those Christians who minister in Jerusalem “do not represent ourselves – we represent the whole world, and especially our Christian brothers and sisters. When you come here, you come home.”

Theophilos spoke of the difficulty in that representation. “Everybody loves Jerusalem, and everybody wants Jerusalem for his own,” he said. “It is very difficult to draw the lines here, so we have to be acrobats.”

However, he said, “Jerusalem has enough room to accommodate everybody.”

The patriarch said with a smile that he has a tradition of offering “spirituality” to his visitors. An assistant then offered small glasses of brandy to the guests.

Curry assured Theophilos that Episcopalians would continue to pray for him, for Dawani and the ministry of the diocese and “praying always for the peace of Jerusalem.”

“You are not alone. We are the body of Christ, and we will always do that” he said. “We will continue to carry the cross with you.” 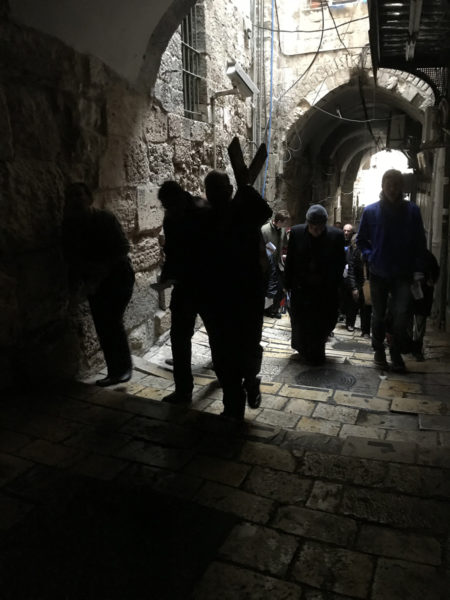 Parts of the Via Dolorosa in Jerusalem’s Old City were in shadows early on Good Friday morning. Photo: Mary Frances Schjonberg/Episcopal News Service 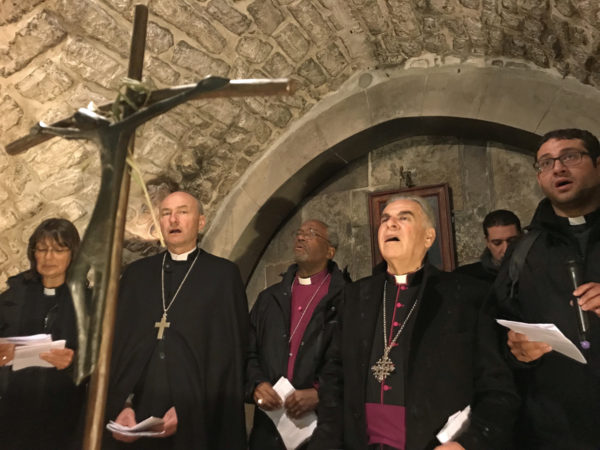 Presiding Bishop Michael Curry and Anglican Archbishop in Jerusalem Suheil Dawani sing in the sixth station, known as Veronica’s house. She is said to have seen Jesus coming up the hill past her house and went outside to wipe the sweat from his face. Photo: Mary Frances Schjonberg/Episcopal News Service 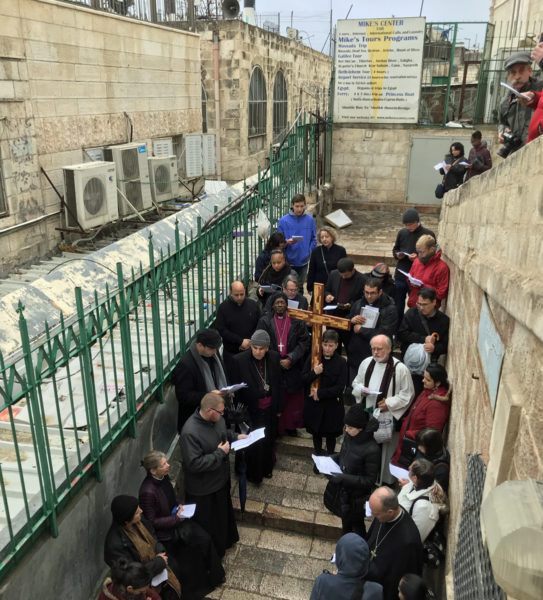 The pilgrims stop for stations nine and 10 along the Via Dolorosa. Photo: Mary Frances Schjonberg/Episcopal News Service 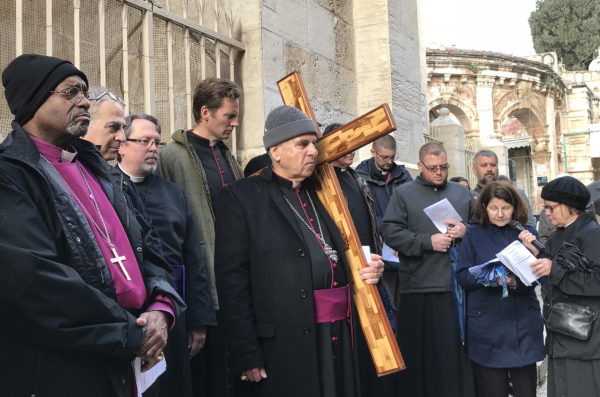 From left, Presiding Bishop Michael Curry; Lutheran Bishop Ibrahim Azar; the Rev. Charles Robertson, canon to the presiding bishop for ministry beyond the Episcopal Church; the Rev. David Longe, Archbishop Suheil Dawani’s chaplain; Dawani; the Rev. Wadi Far, a transitional deacon in the Diocese of Jerusalem; and others listen as the Rev. Mary June Nestler of the Diocese of Utah reads at the final station outside the Lutheran Church of the Redeemer. The Rev. Susan Ackley Lukens, associate dean of St. George’s College in Jerusalem, holds the microphone. Photo: Mary Frances Schjonberg/Episcopal News Service 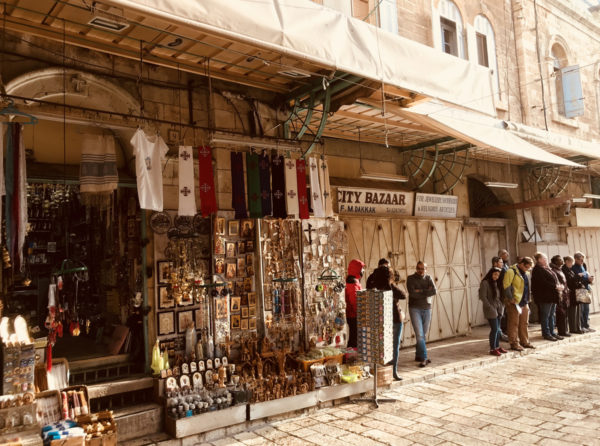 Sun begins to break through the crowds and illuminates a religious souvenir opposite the Lutheran Church of the Redeemer and near the entrance to the Church of the Holy Sepulchre. Photo: Mary Frances Schjonberg/Episcopal News Service