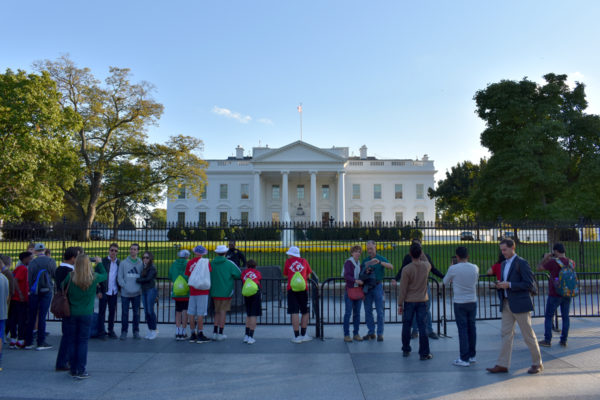 Tourists gather in front of the White House in November. Presiding Bishop Michael Curry travels this week to Washington, D.C., for a series of events as part of the “Reclaiming Jesus” initiative, including meetings with lawmakers on Capital Hill, a Morning Prayer service and a candlelight procession to the White House. Photo: David Paulsen/Episcopal News Service

[Episcopal News Service] Presiding Bishop Michael Curry and the Rev. Jim Wallis of the Christian social justice organization Sojourners will co-lead a May 24 service at National City Christian Church followed by a candlelight procession to the White House.

The events in Washington, D.C., are part of “Reclaiming Jesus: A Confession of Faith in a Time of Crisis,”  an ecumenical Christian elders’ initiative launched in March to “reclaim Jesus” from those believed to be using Christian theology for political gain.

“We are living through perilous and polarizing times as a nation, with a dangerous crisis of moral and political leadership at the highest levels of our government and in our churches,” said the 23 original signers of the statement. “We believe the soul of the nation and the integrity of faith are now at stake.”

It’s the church’s role to change the world through the love and life of Christ. When political leadership undermines that role, “faith leaders must stand up and speak out,” they said, invoking the words of the Rev. Martin Luther King Jr., “the church is the conscience of the state, not its master or servant.”

The contemporary Christian religious leaders believe the United States is in a political, moral and theological crisis. They are concerned with the resurgence of white nationalism, racism and xenophobia; misogyny; attacks on immigrants, refugees and the poor; the distortion of facts and consistent lying by the nation’s highest leaders; and moves toward autocratic political leadership and authoritarian rule.

Since its release, other Christian leaders have requested to sign on to the statement. At the same time, Curry’s own profile has risen dramatically since he was chosen to preach May 19 at the royal wedding of Prince Harry and Meghan Markle. His sermon continues to generate praise this week as Curry turns his attention to Reclaiming Jesus. 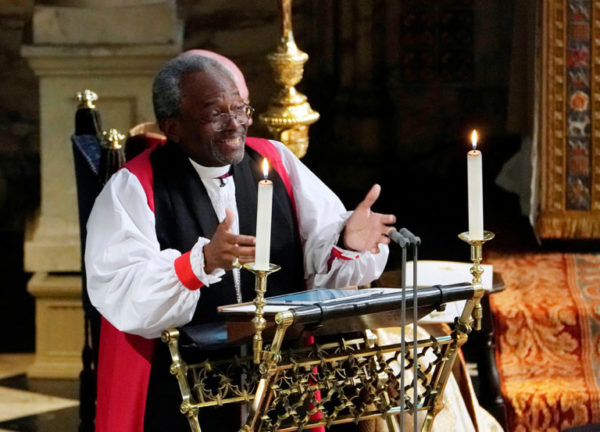 “This weekend I spoke about the way of love. As elders, we view bringing the Reclaiming Jesus declaration to the public square as a tangible example of how to live out that way of love,” Curry said in a news release on Sojourners’ website. “We are Christian leaders bearing moral witness to the teachings of our faith in the public square. As citizens we want our government to reflect our values. As a Bishop I believe we should follow the teachings of Jesus – who taught us to love God and love our neighbor.”

The May 24 service begins at 7 p.m. Curry and Wallis will address “faith in a time of crisis,” prayers and declarations will be offered, and the Howard University Gospel Choir will perform. It’s no coincidence that church leaders planned their trip to Washington to coincide with Pentecost, a time when early Christians took their faith to the streets and the public square.

For the presiding bishop, however, the visit to Washington is more than a public witness. Curry will begin the day by offering Morning Prayer at the U.S. Capitol for members of Congress and their staffs. This is a continuation of the monthly Morning Prayer services organized by the Episcopal Church Office of Government Affairs and led by Episcopal bishops and clergy for more than a year. Following Morning Prayer, Curry is scheduled to meet with lawmakers from both parties and with Republican leaders to share the church’s values and look for points of agreement on issues ranging from refugee resettlement to higher education and criminal justice reform.

The Episcopal Church maintains an official presence in the capital; its Office of Government Relations – housed on Capitol Hill – carries out the church’s nonpartisan, values-based agenda. Every three years the Episcopal Church’s General Convention meets to conduct church-related business and to discuss and pass legislation ranging from revisions to the Book of Common Prayer to resolutions supporting criminal justice and immigration reform. Episcopalians can join the Episcopal Public Policy Network to become involved in this work.

Incidentally, the United States has a long history of political leaders from the Anglican tradition, starting with President George Washington and many members of first Congress in 1789. The Episcopal Church’s prominence on Capitol Hill has been eclipsed by other denominations as the country has diversified over more than two centuries, though dozens of members of Congress still identify as Episcopalians or Anglicans.

Today, at least 38 of the 535 citizens serving in Congress identify as Episcopalians; 22 Republican, 16 Democrats.

-Lynette Wilson is managing editor of the Episcopal News Service. She can be reached at lwilson@episcopalchurch.org.