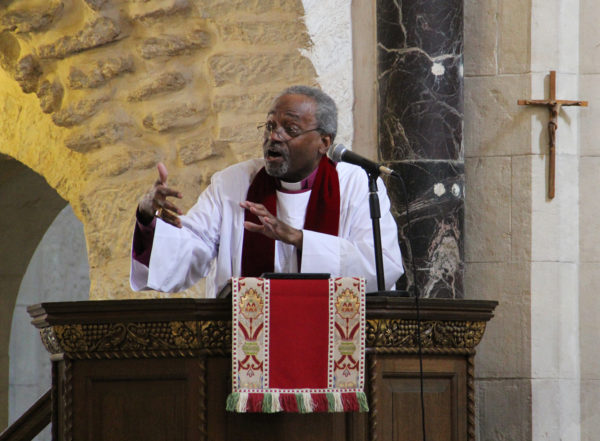 “The world doesn’t have to be this way because God has a dream and a vision for this world, and nothing can stop God’s dream,” Presiding Bishop Michael Curry tells the congregation during the Palm Sunday Eucharist at the Anglican Cathedral Church of St. George the Martyr in Jerusalem. Photo: Mary Frances Schjonberg/Episcopal News Service

[Episcopal News Service – Jerusalem] Presiding Bishop Michael Curry began Holy Week in the Holy City of Jerusalem by proclaiming the good news that Jesus has shown the world a way to live that is based in love, not tyranny, and can lead to the coming of the kingdom.

During his sermon at the Holy Eucharist at the Anglican Cathedral Church of St. George the Martyr, Curry contrasted the simultaneous entry into Jerusalem of two very different men: Jesus and Pontius Pilate. The latter, Curry said, rode in from the West on a war horse with legions of Roman soldiers and with “all of his disdain and arrogance and worldly power.”

“Jesus came in on the other side of town on a donkey,” Curry said, adding that Jesus’ timing was no coincidence. He meant to show that “there is another way; that you don’t have to live this way. The world doesn’t have to be this way because God has a dream and a vision for this world, and nothing can stop God’s dream.”

War, violence and hatred do not work, Curry said. “They may work for a day; tyrants may endure for a day, but they do not last.”

Jesus shows a way to life in which there is room for all and the creation is preserved. “A way that can help us find life, real life,” Curry said. 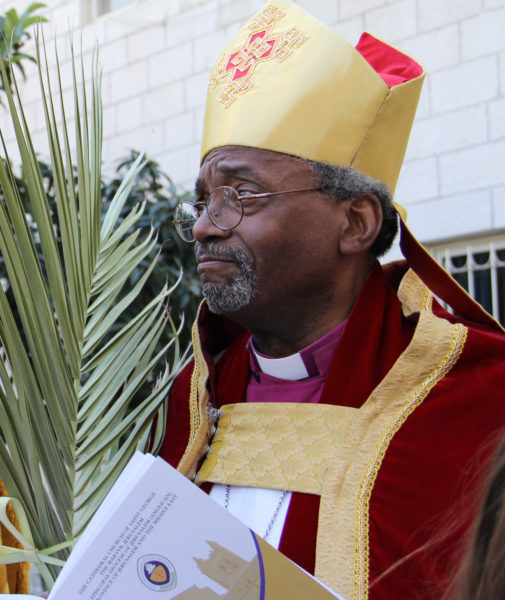 The presiding bishop told the congregation about the March 24 marches all over the United States led by students who want to end gun violence. He compared their entrance into Washington, D.C., with Jesus’ entrance into Jerusalem.

Echoing “All Glory, Laud and Honor,” the traditional Palm Sunday processional hymn, Curry said, “Yesterday, our children made hosannas ring again for they wanted the leaders of the nations, the leaders of my beloved country, to hear that the way of violence is not the way.”

“They marched for peace, they spoke of love, they asked our leaders to change laws so that all could be saved.”

The resurrection that comes a week after Palm Sunday, Curry said, was “God’s way of showing us that love, in the end, will win. God’s dream – God’s kingdom – will come on earth as in heaven.”

The Palm Sunday morning service, celebrated in Arabic and English, was preceded by the blessing of palm branches and a procession from St. George’s College Square into the cathedral, located on Nablus Road in East Jerusalem.

The Rt. Rev. Suheil Dawani, Anglican archbishop in Jerusalem, invited Curry to make a Holy Week pilgrimage through the Holy Land. The journey began in Amman, Jordan, on March 24. There, Curry went to St. Paul’s Church in the eastern part of the capital city to listen to the stories of Iraqi Christian refugees to whom the church ministers. Curry and his group then toured the site of Jesus’ baptism on the Jordan River, a UNESCO World Heritage site that is run by the Baptism Site Commission, an independent board of trustees appointed by H.M. King Abdullah II bin Al-Hussein.

Curry will spend the week with Dawani exploring the ministries of the Episcopal Diocese of Jerusalem, which is spread over five countries — Israel, Jordan, Lebanon, Palestine and Syria. He has also begun learning about the struggles of the declining Christian population in the Holy Land and throughout the Middle East.

Throughout the week, the presiding bishop will also join Holy Week services, observances and celebrations, including the traditional Maundy Thursday foot washing and the Stations of the Cross on Good Friday.

In their first two days of their pilgrimage, both Curry and Dawani spoke of continuing to deepen what each called a long-standing relationship. During his sermon at a Palm Sunday Evensong, the archbishop welcomed Curry on his first official visit since becoming presiding bishop in 2015. Dawani was the first person to congratulate Curry after his installation at Washington National Cathedral.

The archbishop made Curry an episcopal canon of St. George’s Cathedral during Evensong. Dawani said he prayed that this honor would help the presiding bishop carry “this cathedral and the people of this land in your heart throughout your ministry.”

The Rev. Hosam Naoum, dean of St. George’s, told Episcopal News Service that it is “intrinsic and essential” to have the Episcopal Church represented in the cathedral as an episcopal canon. Archbishop of Canterbury Justin Welby, as well as the leaders of Anglican Communion provinces in each continent, also hold such status. Presiding Bishops Ed Browning, Frank Griswold and Katharine Jefferts Schori also held the position during their tenures.

“The cathedral here becomes a sign for unity in the Anglican Communion, despite all the difference we have,” Naoum said. “That is the message that comes out from Jerusalem to the whole worldwide church.”

The canons are expected to pray for the cathedral and the diocese’s ministry as a way to “strengthen and deepen” the existing relationships. “It also becomes a mutual relationship where we will also be supportive of your ministry” in the Episcopal Church, the dean said.

Those relationships “become a beacon of how for the whole world when the church is united as a community and as a family of Christ,” he said.

Such unified Christian communities are becoming more and more important, the archbishop said. During his sermon, Dawani said Jerusalem’s traditional Palm Sunday procession up and down the Mount of Olives includes Christians of every denomination and expression. More than 20,000 pilgrims walk together, “reminding us that in this land the Christians speak with one voice; this is a voice that must speak in a way that speaks the truth of Christ, sometimes even in the face of great forces.”

Those who would be what Dawani called “Christ’s prophets in the world” must know that, especially in the Middle East, communities and people are suffering because others “do not respond in love, but in hate.”

The archbishop reminded Curry that he had heard some of the stories of what happens when people do not respond with love when he met with Iraqi Christian refugees in Jordan. He asked Curry to tell their stories to those who could help the refugees leave the limbo in which they find themselves.

“These people lost everything, but not their faith,” the Rev. George Al-Kopti, vicar of St. Paul’s, told Curry during his visit. “It challenges me: What shall I do if that happens to me?” 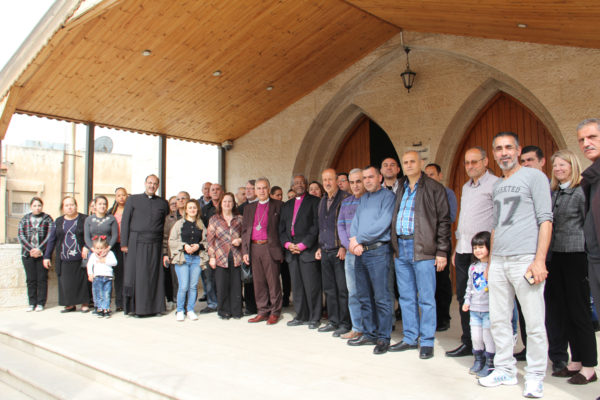 Al-Kopti said St. Paul’s began working with Syrian refugees, but most of them have been able to leave Jordan. Now, they minister to the Iraqi Christians, who told Curry they are not allowed to work, and they feel unwelcome in Jordan. However, persecution in Iraq means they cannot go home. They are waiting for official United Nations designation as refugees, which would allow them to emigrate. 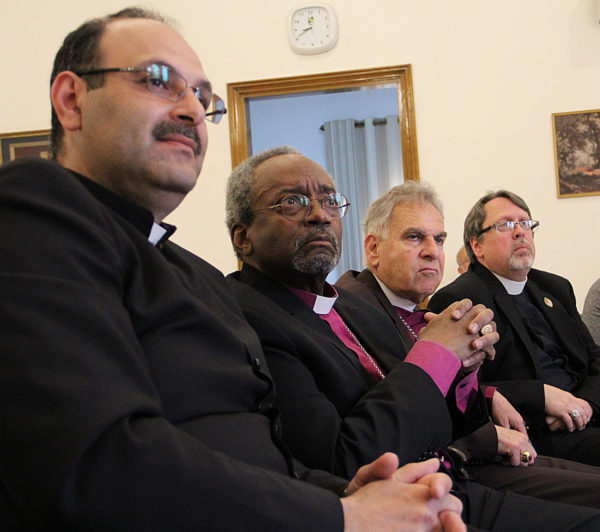 “I am a Christian and I have the peace of Christ in my heart. I know from the Bible that Christians are to be persecuted, but this is a bad situation we live with in Jordan after we get our homes and our country, and our lives there taken from us,” one woman told Curry. “We’re waiting. We’re doing nothing. We’re waiting to have life.”

Al-Kopti said the story of Iraqi Christian refugees “is not on TV; it is not on the media. Everybody is silent about their agony, about their losses.”

“We would like you to be a voice for them,” he told the presiding bishop.

Curry spent almost an hour listening to a group of close to 30 men and woman, some of whom came with their children. “We want your brothers and sisters in the United States and in other countries to hear your story and understand your struggle,” Curry said. “We are brothers and sisters in Christ, and maybe one way we can help you is to be sure your story is heard in the U.S.”

“We will do our very best to help your story to be told. You are not alone. We follow Jesus and he rose from the dead, and because he lives we can face tomorrow.”