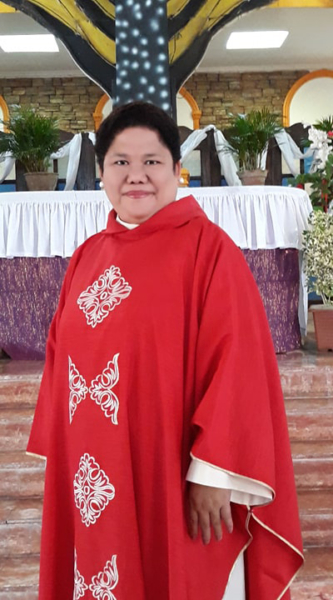 [Episcopal News Service – Manila, Philippines] Amidst the sweltering heat of Philippine summer there is a rising religious fervor here as the clergy and people of Iglesia Filipina Independiente (IFI) prepare for the consecration of the first woman bishop, Emelyn Dacuycuy.

While there are three other IFI bishops-elect scheduled for consecration in several dioceses this year in this 10-million member Christian denomination, the attention is focused on this historic event.

The consecration will be held at the Aglipay National Shrine in Batac, Ilocos Norte on May 5. The date and venue coincide with the birthday and birthplace of the Most Rev. Gregorio Aglipay, co-founder and first Obispo Maximo of the IFI.

Known in history as “the only and living result of the Philippine Revolution of 1898,” the IFI was proclaimed in August 3, 1902, by the first Philippine labor leader, Don Isabelo delos Reyes, at the meeting of Union Obrero Democratico in Centro de Bellas Artes in Manila.

While its founding was the offshoot of political revolution against three centuries of Spanish colonization and a movement for religious reformation in Philippine Catholicism, the IFI followed closely the attitude of the Roman Catholic Church with regards to gender inclusion.

And while its first full-communion partner, The Episcopal Church welcomed women ordination in 1973, it took 44 years before the IFI followed suit and formally accepted women’s ordination in 2017.

Because Aglipay was not a bishop when the IFI departed from the Roman Catholic Church in 1902, the church wandered for 40 years in “theological wilderness,” seeking to be restored to catholicity.

It was The Episcopal Church that bestowed historic apostolic succession when three Episcopal bishops came to the Philippines and consecrated three IFI bishops (Isabelos delos Reyes, Jr.; Gerardo Bayaca and Santiago Fonacier) into the episcopate in 1948.

Both churches then approved the concordat of full communion in 1962 recognizing their common catholicity and mutual independence and autonomy.

Not an easy journey

The election of Dacuycuy to be bishop of the Diocese of Batac after 117 years of IFI history was therefore not an easy journey. Anxious that if they elect a woman bishop she might have a chance to become an Obispo Maximo, many members of the Supreme Council of Bishops (SCB) made determined efforts to derail any chance for a woman to be elected bishop.

In an interview with this writer, Dacuycuy said, “It took me 11 special General Conventions and three SCB meetings before I finally got the approval.”

“Any woman priest aspiring for the position of bishop in a male-dominated council of bishops needs extra strength for the hard struggle. I am very fortunate I have very strong support from my family and by the grace of God I am endowed with a very firm principle to stand against stiff opposition and even amidst my own brokenness,” Dacuycoy said.

Dacuycuy, who prefers to be called, “Bishop Emelyn” (to emphasize her womanhood) said that the struggle for gender equality must continue to pervade not only in church but also in the larger Philippine society.

“Patriarchalism and machismo images are still prevalent in the Philippine culture. Filipino women are not yet fully free from economic, political, cultural and religious oppression. The work of empowering women must be continued vigorously,” she said.

Role in the church

Asked what role she would have to play as the first and only woman in the Supreme Council of Bishops, Dacuycuy said that “engendering leadership and inspiring more women clergy to step up would be the biggest challenge.”

“In my humble beginning as ‘the first,’ I plan to help redefine patriarchal meanings, symbols, attitudes, cognitions and recognitions that have long been considered normative in a male-dominated house of bishops,” she said.

“I continue to pray for God’s wisdom and I believe I am now getting a better support not only from several male bishops but also from the current Obispo Maximo, the Most Rev. Rhee Timbang, in whose term this historic event is taking place.”

While there are three other bishops-elect scheduled for consecration in several dioceses in the country, the Obispo Maximo highlighted the consecration of Dacuycuy and has invited local and foreign dignitaries to attend including its full communion partner, The Episcopal Church.

Kansas Bishop Cathleen Bascom and Southern Ohio Assisting Bishop Nedi Rivera, who has also served the dioceses of Olympia and Eastern Oregon, will serve as co-consecrators, and will bring greetings from Presiding Bishop Michael Curry.

-The Rev. Winfred B. Vergara is missioner for Asiamerica Ministries in The Episcopal Church.