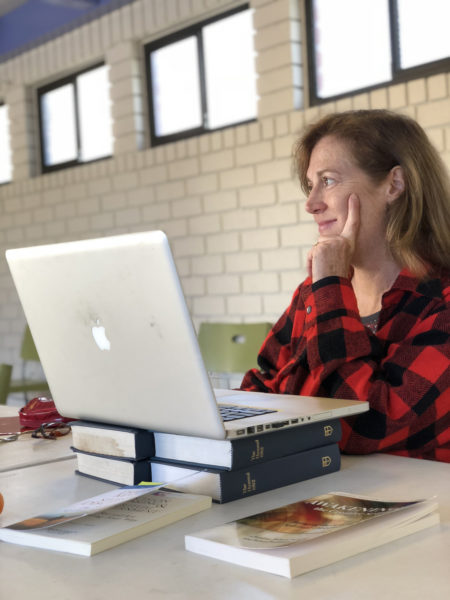 While money for renovation are still being raised, one of the co-creators of The Divine Office at St. Augustine by-the-Sea Episcopal Church in Santa Monica, California, Deborah Kaufman Giordano, a healthcare recruiter, uses hymnals to make plastic card-table “desks” work for her. Photo courtesy of Katie Cadigan

[Episcopal News Service] When Dennis Doherty found working from his West Los Angeles home too distracting and isolating, he went to coffee shops and even the local IHOP.

Then he heard about The Divine Office (TDO) at St. Augustine by-the-Sea Episcopal Church in Santa Monica, California, a few miles away. It blends monastic style spirituality and the secular phenomenon of creative co-work spaces.

Initially, “I wondered, what’s all this prayer business?” Doherty told the Episcopal News Service, during a recent telephone interview. “Then I decided, well, if this is the price I have to pay for having a quiet place to work, I’ll check it out.”

The Rev. Katie Cadigan, associate rector and TDO founder, views it as a “micro-monastic community” operating in under-utilized rooms on St. Augustine’s campus.

With growing numbers of people working remotely, Cadigan hoped the church’s location – a few blocks from the Pacific Ocean – and its available space would draw from the area’s boom in younger, home-based professionals.

Funded, in part, through a $40,000 Episcopal Church New Church Start grant last year, she said it is “like a ‘We-Work’ or like the people who work in Starbucks independently,” but whose participants pray several times daily. 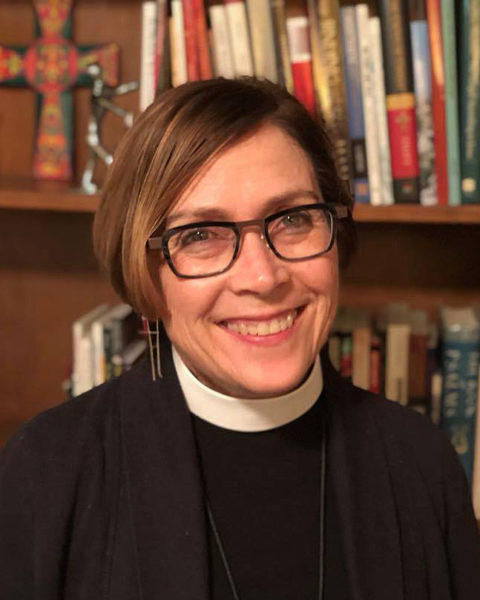 “This is kind of like a day monastery, where people will come to work and worship,” Cadigan said.

“Instead of going off to a monastery, having a wonderful retreat and coming home and realizing, after a day, a week, all that good feeling and connection is gone, what if we brought monastery-like experiences into our everyday world? What if we wrapped and enveloped our work lives in prayer?”

Los Angeles Bishop Suffragan Diane Bruce, a TDO advisor, said the idea immediately intrigued her. “People, working from their homes can be and feel so isolated, which is the opposite of what Jesus modeled in being in community,” she told ENS.

“The Divine Office offers a space in which people can come together and connect—it is a holy space and time!”

The Rev. Thomas Brackett, Episcopal Church manager for church planting and mission development, said TDO’s application captured the imagination of reviewers from the Genesis Advisory Group on Church Planting by saying basically that, “we believe that a rhythm of life blesses anybody who engages this.

“And, instead of waiting for people to come and learn our prayer book or the Daily Office, we want to take it to them in ways that are meaningful to them.”

And that it is a work in progress.

“They said from the very beginning, we don’t know what that is going to look like yet but if you are willing to venture with us, we’re going to figure it out and we will let you know what we learn.” 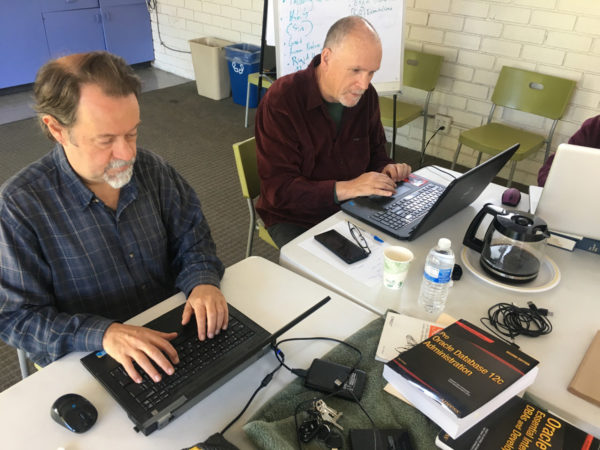 Christopher Curzon, IT consultant (left), and Dennis Doherty, founder of DohertyTech GOSLYN (right), are two of more than a dozen co-creators of The Divine Office, working on rickety chairs and card tables while funds for renovation are being raised. Photo courtesy of Katie Cadigan

A work in progress

Doherty is among at least a dozen TDO “co-creators” who meet once, sometimes twice weekly and who take turns leading intervals of morning, noonday and closing prayers.

Another member of the group, Deborah Kaufman Giordano, president and founder of Healthcare Recruiting, Inc, especially appreciated that “not everything needed to be perfect to start this community plant … we didn’t have to have it all figured out on day one.”

While at times working with laptops on card tables and spotty internet has a rough-around-the-edges feel, the collective wisdom of the group of writers, filmmakers, editors and others is rewarding, said Giordano, who is married to actor James Giordano, of Twin Peaks fame.

“TDO is making a huge difference in my life, and holds the potential of making a big difference in the lives of others … by balancing our work lives with our God-lives. This isn’t a space where we are trying to convert anyone. We never ever proselytize. But … I’m working on not compartmentalizing God, not pushing God into a box where I only reflect on Him maybe once a week, in Sunday worship. It gives me hope.”

Currently, the group meets on Thursdays and some Tuesdays. Eventually, the goal is to expand to five days a week. 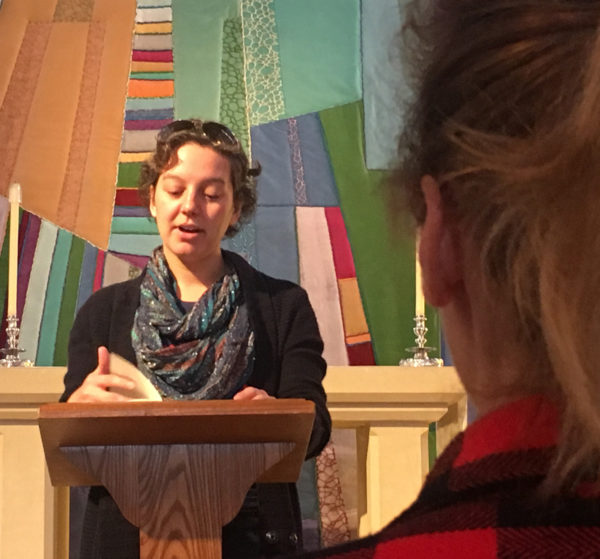 Madeline Stewart, storyteller and community builder, co-leads one of the three prayer and meditation services that envelop each workday at The Divine Office. Photo courtesy of Katie Cadigan

The days begin with 9 a.m. Morning Prayer and have fallen into a rhythm of morning prayers and a lifting up of daily intentions.

A bell chimes at noon to signal worship and, everyone “puts down the laptop,” Cadigan said. “They do not finish the email they were typing. Just like monks, way back when, would not finish their calligraphy. They would put down the pen, and at the sound of the bell, go into the chapel and do prayer meditation.”

Noonday prayers are a “kind of check-in, a where we’re at right now, vis-à-vis what we’d prayed for in the morning … and people are in gratitude,” Giordano said.

Lunch is fluid; some people bring sack meals. Others walk the four blocks to the Santa Monica Pier or to local restaurants. Closing prayers are typically around 4 p.m., “the group decides when … and the prayers are more around reintegrating with the world or family or what’s next on the horizon,” Cadigan said.

She joins the group for their regular prayer intervals, but “I have never, ever led prayer,” Cadigan said. “My role is as a visionary and a shepherd. The challenge is, how do I grow this organically and listen to the Spirit, so the gifts people have in the community can rise up and flourish in the ways the Spirit calls them to grow.”

The TDO’s pattern is a modern-day take on the traditional daily round of prayer known as the Divine Office, the Liturgy of the Hours, or the Daily Office that has been practiced since the earliest days of the Christian church. The practice has its roots in the ancient Jewish custom of offering prayers and psalms periodically throughout the day.

Doherty, a distributor for restaurant environmental waste management systems, said he usually schedules his work week around TDO, and spends his time there invoicing clients and responding to emails.

“The good news is, the prayer has become very important to me. It’s not the price to pay for having a quiet place to work,” he told ENS during a telephone interview from Ireland, where he was vacationing. “Prayer is really part of the appeal and the value … so it’s pretty exciting.”

Jesus as a co-worker

Over time, and with a more reliable internet connection, she anticipates that gradually, TDO’s reach will expand, hopefully, to a broader base, “since the nature of independent work is that you are not showing up every day.”

For example, “there’s a writer who’s now in Atlanta, a filmmaker who just got back from several months in Cambodia, filming, and another one in Boston, editing, so the day-to-day makeup is a bit more fluid.”

There are also physical plant and financial issues: a future building renovation is planned, plans are in the works for that more reliable internet access, as well as a campaign to raise the additional $220,000 needed to finance it all. Eventually, a membership fee will be charged to help defray those costs.

Unanticipated, but necessary additions will include “phone booths” for private calls and even a shower. “The first week, we had a guy go swimming and then come up and work,” she recalled, chuckling. “So, we discovered we’re going to need a shower … and a feeding station.”

She also discovered that “a good number of people who work and worship with us for just one or two days experience a spiritually meaningful shift of some sort and emerge seeing The Divine Office as a community to participate in on a more infrequent basis than I had originally envisioned.”

This “unexpected rhythm is … stretching us to conceive of membership as something far broader than initially assumed. And a new dimension of discernment opens up for us around how we go about creating a cohesive community with far wider and more fluid edges than anticipated,” she said.

Eventually, she hopes the model of being a cloister in and of the world, will be replicable “in any denomination, any space.”

“The way we think about monasteries is, they’re places you go away to,” she said. “You go to get your spirituality fix, but in the life of a monastic, the work and prayer is all integrated.”

So, TDO is reclaiming the experience of the monastic, “milking cows and praying, writing your emails and you’re praying and, as we Episcopalians like to say, praying shapes believing.”

We need places like The Divine Office to help us all to daily grow into discipleship, Cadigan added, quoting Giordano: “‘Jesus is our co-worker, sitting right beside us for every email, every phone call, every everything’.”

–The Rev. Pat McCaughan is a correspondent for the Episcopal News Service. She is based in Los Angeles.