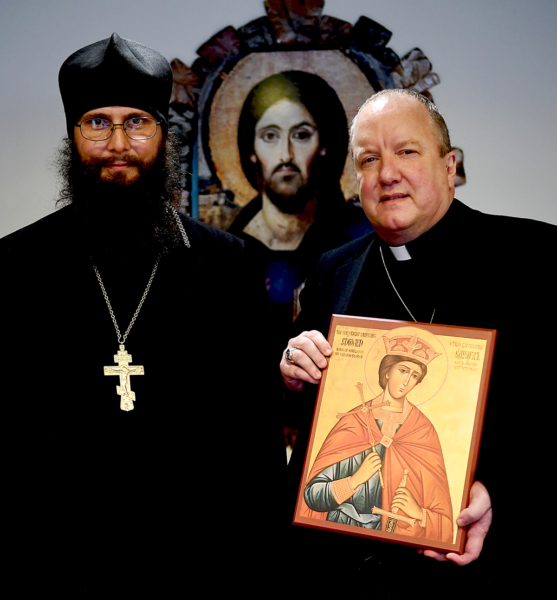 Editor’s note: A version of this story ran in March in the Enid News & Eagle.

East meets West in a new collaboration between the Russian Orthodox and Episcopal churches in a small city in north central Oklahoma. Members of St. Nino Equal-to-the- Apostles, a mission parish of the Russian Orthodox Church, have begun meeting for monthly worship services in a chapel at St. Matthew’s Episcopal Church in Enid.

The Russian Orthodox congregation, a mission of St. Benedict Orthodox Church in Oklahoma City, about 80 miles to the southeast, held its first service and fellowship dinner at the Episcopal parish in February.

“What are things I would have wanted to know when I was entering the church I didn’t get?” Floyd asked. “One of my core goals of my Enid visits is to give the catechumens and inquirers more instruction into those topics, and to also give a more rounded liturgical experience. I think it’s good for people to see and experience the more liturgical services of the church.”

‘Right thing to do’

Until February, Floyd’s mission congregation of 10-12 worshipers was meeting in the basement of a business owned by one of its members.

The Rev. John Toles, rector at St. Matthew’s, said when he learned of the Orthodox mission meeting nearby, he saw it as an opportunity to open the doors of The Episcopal Church to another congregation in the Body of Christ.

“Knowing we had space available in the church, we thought we would reach out to St. Nino’s and see if they would like to use it,” Toles said. “A church is not a building, but if our building would provide a more formal space for them to be the church, it was just the right thing to do.”

Toles offered Floyd the use of St. Julian’s Chapel, a side chapel the Episcopal congregation uses for Wednesday noon Mass, at no cost. He said there was no concern about the two denominations sharing the same space.

“We’re not in competition here,” Toles said. “We oftentimes think we are, but the different churches are not in competition with one another, and this was an opportunity for them to have a place to worship. We are the Body of Christ. That’s what it really comes down to, in all its multiple expressions.”

When Toles received his doctorate, the speaker was Metropolitan Hilarion of Volokolamsk, a bishop of the Russian Orthodox Church and chairman of the Department of External Church Relations of the Moscow Patriarchate.

Floyd also has past experience with the Episcopal Church. After being raised in the Christian Church (Disciples of Christ), he attended an Episcopal Church in Lexington, Ky., during his last two years of college, before being confirmed in the Roman Catholic Church, then attending the Byzantine Catholic Church in Portland, Ore., and eventually finding his way to the Orthodox Church at St. Antony Antiochian Orthodox Christian Church in 2004.

“Somewhere along the way, I got suckered into being a priest,” Floyd said with a laugh.

He was ordained in The Russian Orthodox Church Outside Russia in 2014. Floyd half-jokingly refers to his Protestant-Anglican-Catholic-Orthodox progression as “slowly making my way back through history.”

“On the last boat out were the hierarchs who formed what was to become the Russian Church Outside Russia,” Floyd said. “This terrible event ended up helping spread Orthodoxy around the globe and helping to establish Orthodoxy’s contact with the Western world.”

Floyd said the Orthodox Church in this region has been blessed with assistance in the past, and St. Nino’s is “thankful to St. Matthew’s for providing a nice venue for us to have services.”

He said the congregation at St. Benedict in Oklahoma City started out holding services in a chapel at a Catholic school, and Saints Peter and Fevronia Orthodox Church in Kansas City got its start in a Lutheran chapel before purchasing a former Coptic church.

“There is a history of other denominations being so kind as to allow Orthodox missions to use their chapels,” Floyd said, “and we’re very thankful to St. Matthew’s for offering this.”

Floyd said the collaboration also gives an opportunity for increased dialogue and understanding between the two faith traditions.

“It’s always important to be able to speak with others in other traditions in a polite and respectful way,” Floyd said. “We always want to understand and respect each other, but we always maintain our identity.”

Floyd said the shared space will enable the St. Nino congregation to continue to grow and to serve those whose search may lead them to the Orthodox Church.

“I give thanks to God for opening their doors and allowing us the use of the chapel,” Floyd said. “For a lot of us in missions, we have a special place in our hearts for people who have opened their doors to us, or helped us in any other way.”

–James Neal is a parishioner and vestry member at St. Matthew’s Episcopal Church in Enid, Oklahoma.