In October 2016, the Episcopalian had a psychotic episode at her Bronx, New York, apartment. It wasn’t the first time that police responded to a disturbance complaint about Danner, who had been diagnosed with schizophrenia decades ago. In the past, 911 calls resulted in Danner taking a trip to the hospital, returning home stabilized.

This time, however, gunshots rang out. And Danner, 66, was gone.

New York Police Department Sgt. Hugh Barry was charged with murder and manslaughter because prosecutors say he didn’t have a reasonable threat to his life and wasn’t following police protocol. His trial began Jan. 30, more than a year later. After a one-day break, the trial is expected to resume Feb. 1. 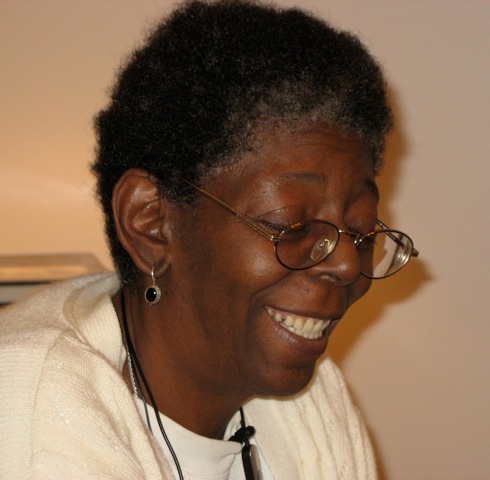 Episcopal church members plan to be in the courtroom every day in a show of support, said the Rev. Matthew Heyd, rector of the Episcopal Church of the Heavenly Rest in Manhattan. He knew Danner for the last 10 years.

On that first day in the courtroom, about 35 parishioners from Manhattan churches, including Church of the Heavenly Rest, Trinity Church Wall Street, St. Mary’s Episcopal Church, Harlem, and the Cathedral Church of St. John the Divine, marched to the Bronx courthouse. She attended all those churches at one time or another.

“It’s hard because the trial is about tragedy, both the tragedy of her killing and the tragedy of mental illness being unaddressed,” Heyd told Episcopal News Service. “And it’s hopeful, because the church is organizing, both to recognize the dignity of her life and to respond and give meaning to her struggle and to support others who are struggling with mental illness also.”

Parishioners and clergy were also there to bring home the point that law enforcement officers, in New York and nationwide, need much more training in handling mental health crises. New York officers can take Crisis Intervention Team training, but fewer than a quarter of the force has. It’s not required.

“How many times a day is an officer at a door and doesn’t know what’s going on inside and how to handle it?” Heyd asked. “However the trial turns out, the need for more skill and support in this is abundantly clear.”

Nationwide, police officers in 2015 shot and killed 251 people who had exhibited signs of mental illness — a quarter of all the people shot and killed by police that year, the report stated. Alternatively, the Federal Bureau of Investigation discovered that 1,710 law enforcement officers nationwide were assaulted while handling people with mental illness, and two officers were killed while doing so.

“We share your conviction that Deborah’s death was a tragedy that should have been prevented,” the Rt. Rev. Andrew M.L. Dietsche, bishop of the Diocese of New York, wrote in a Jan. 18 letter to New York Mayor Bill De Blasio. “And we believe that Crisis Intervention [Team] training for this officer and for his fellow officers could have saved Deborah’s life.”

Diocesan representatives are calling to meet with the mayor, as well as police, to discuss this mental health crisis issue.

The Rev. Winnie Varghese, priest and director of justice and reconciliation at Trinity Church Wall Street, also attended Barry’s criminal trial Jan. 30. Churches across the United States regularly minister to people who have mental illness, and often come upon people in a state of crisis who need professionals to help de-escalate the situation, she said.

“Until we have a better health system in New York, our police are our front line for mental health emergencies; if people are trained correctly, we can solve this,” Varghese told ENS. “These folks aren’t committing a crime; they’re sick. It puts police officers in a horrible position, and it puts people who are ill in a horrible position. It makes everyone vulnerable.”

“This isn’t about vengeance. It’s about how do we change this situation,” she said.

Varghese and Heyd said the church can’t handle the problem alone. Increased police training makes the most sense. It’s a cause they’re fighting for so that they don’t lose more parishioners this way.

Heyd knew Danner pretty well while she attended both Heavenly Rest and Trinity.

“She knit baby blankets for both my children,” Heyd said. “She was really smart and kind, and she struggled. All of that was evident to people who knew her.”

Amy Sowder is a special correspondent for the Episcopal News Service and a freelance writer and editor based in Brooklyn. She can be reached at amysowderepiscopalnews@gmail.com.