At a North Carolina church, the tradition of ‘child bishops’ teaches the meaning of Advent 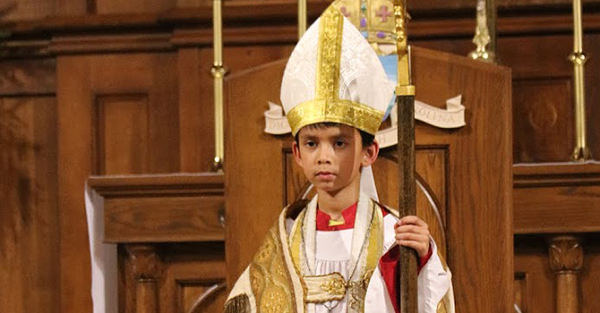 In December 2018, Prakash Keeley was enthroned as a “bishop” at St. Timothy’s Episcopal Church in Winston-Salem, North Carolina. Photo courtesy of Steve Rice

[Faith & Leadership] Last December, 10-year-old Prakash Keeley proudly donned the gold-and-white bishop’s robe and miter, gripped a staff that towered over him by a half-foot, and blessed a kneeling congregation with the words of Jesus: “Truly I say to you, whoever does not receive the kingdom of God like a child shall never enter it.”

Since 2012, St. Timothy’s Episcopal Church in Winston-Salem, North Carolina, has annually enthroned a fifth-grade boy such as Keeley, giving him bishop’s regalia and letting him lead the service for the Dec. 6 Feast of St. Nicholas. The tradition of the “boy bishop,” with roots dating back to medieval times, emphasizes the upside-down aspect of the Advent season.

The making of boy bishops, if only for a service, illustrates the words of the Magnificat in a physical way: “He has brought down the powerful from their thrones, and lifted up the lowly” (Luke 1:52 NRSV).

At St. Timothy’s, a senior boy chorister receives the honor each year. The chorister is elected by parish leaders for his dedication and involvement with the programs at the church, and one of the privileges is taking on the role of boy bishop in December. The other choristers also take part, dressing as “canons” and vesting him with the robe and a bishop’s ring.

The newly enthroned bishop then leads parts of the service, reading a prayer from a booklet that includes the names of all the boy bishops from previous years. The following year, he participates in passing the title on to his successor.

Keeley enjoyed the new perspective he gained by standing in the front and facing the congregation for the first time as a leader, not just a congregant, he said. He practiced his readings and prayer beforehand, knowing that all eyes would be on him.

“It was pretty nerve-wracking but also kind of fun,” he said.

With the honor also came some surprises, Keeley said. Some of his observations were quite practical: “A bishop has to wear a lot of clothes — it was kind of hot, actually.” Others were childlike, yet profound: “Everybody was watching you and expecting you to make the next move.” 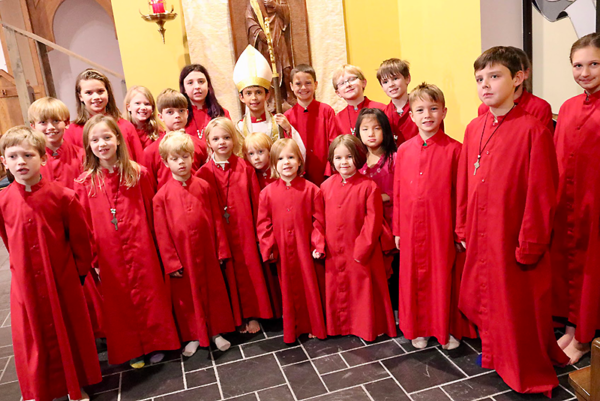 Keeley stands with other choristers after the service. Photo courtesy of Steve Rice

The Rev. Steve Rice, the rector of St. Timothy’s, was inspired by the British tradition of boy bishops.

The exact origins of the tradition are unclear, but historian Neil Mackenzie, the author of “The Medieval Boy Bishops,” argues in an article for History Today that the tradition must have been established before 1222; inventory documents from that time in Salisbury, England, indicate that the local parish had a practice of giving a boy a bishop’s ring.

The tradition was common in the Catholic churches of England in the late Middle Ages, and churches would crown the boys from the Feast of St. Nicholas on Dec. 6 to the Feast of the Holy Innocents on Dec. 28. Eventually, the practice was revived in the late 20th century in England, and the first girl bishops were appointed in the early 2000s.

The enthroning of boy bishops taught a congregation that children are crucial to the life of the church, and the lesson found a perfect context in the Feast of St. Nicholas — a patron saint of children known for his generosity — and the words of the Magnificat.

Rice experiences the power of the tradition in the way it helps him understand Mary’s words.

“These children and the least among us are the bearers of the kingdom and are leaders. And to see that embodied in a tangible way moves me,” he said.

He also sees the impact that it has on the kids themselves. They love the tradition, Rice said. They love capturing it in photos, but they also perform the liturgy with poise, taking their roles quite seriously.

Keeley’s mother, Christie, valued the experience for both Prakash and her older son, who also was a boy bishop in 2014. Helping lead a service was something that neither of her children had ever done, and the same is true for many children who grow up in church.

During the season of Advent, when Christians focus on God’s humility in becoming human, the tradition teaches the congregants at St. Timothy’s that everyone is important for the life of the church, she said.

“You don’t have to be a bishop; you can be a boy,” she said. “You can be a young person and still be involved in the church life.”

This article was first published in Faith & Leadership.

The post At a North Carolina church, the tradition of ‘child bishops’ teaches the meaning of Advent appeared first on Episcopal News Service.