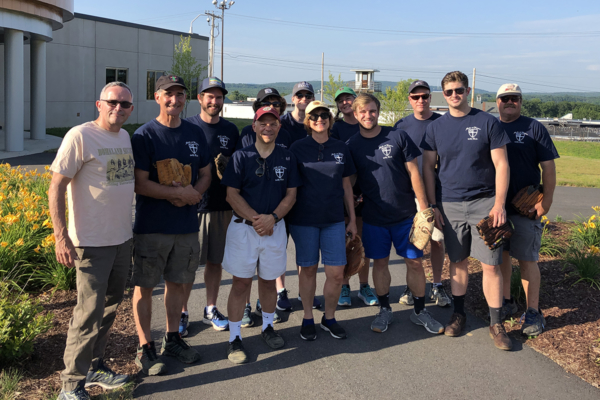 The Diocese of New Hampshire softball team poses for a photo July 16 outside the state’s Correctional Facility for Women in Concord before the team’s final game of the season in a league with a prison team. The league’s coordinator, Dan Forbes, is on the left, and standing next to him is Bishop Robert Hirschfeld. Photo: Dave Deziel/Diocese of New Hampshire

[Episcopal News Service] Episcopalians may be familiar with Jesus’ assurance that “where two or three are gathered in my name, I am there among them.” Members of St. Matthew’s Episcopal Church in Goffstown, New Hampshire, also know this: Two or three, however devout, are not enough to field a softball team.

Whether they bring two, three or a full squad of nine or more players, the Episcopal softball team led by St. Matthew’s parishioner Benge Ambrosi gathers several times each summer in Jesus’ name to play against inmates at the state’s prison for women in Concord. If the visiting team is short on players, the prison team is big enough to provide a few substitutes.

He told Episcopal News Service in a phone interview that the players keep the conversation lighthearted, and the games are well attended by fans – those fellow prisoners who are able and available to come watch. A recent game drew about 50 inmate players and fans, at a prison that typically holds between 100 and 200 inmates. “It’s a big social event for the crowd there,” Ambrosi said.

Ambrosi coaches two teams: one from St. Matthew’s and one whose players come from around the diocese, which is based in Concord. Each team plays two games at the prison, officially known as the New Hampshire Correctional Facility for Women. The games are part of a larger league that includes four secular teams, including one from the local prosecutor’s office. 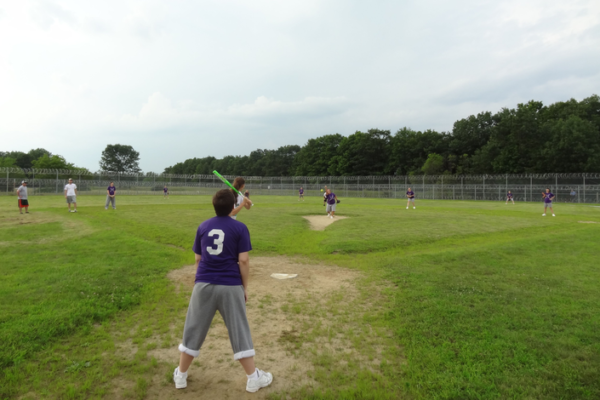 The New Hampshire women’s prison team, shown in a 2013 Concord NH Patch photo, played at a detention facility in Goffstown before moving in 2018 to a new prison in Concord. Photo: Tony Schinella/Concord NH Patch

St. Matthew’s has been involved since the league started in 2002. Back then, female prisoners were held at a facility in Goffstown, near St. Matthew’s, and parishioner Barbara Carbonneau coached the congregation’s team. She handed the reins over to Ambrosi a few years ago but still plays. When she turned 83 on July 11, the inmates joined in singing “Happy Birthday” to her on the field.

“They have fun when they’re out there, and we enjoy being there,” Carbonneau told ENS. “It’s just a good time, and it’s a good way to [encourage] Christian fellowship.”

Carbonneau picked up the nickname “Barbed Wire” a few years ago, and the prisoners have an unofficial rule on their team: No one is allowed to get Barb out.

Dan Forbes, a social work professor at Saint Anselm College in Manchester, organizes the league and serves as volunteer coach of the prisoners’ team. He said in an interview with ENS that the prison team’s pitcher once made the mistake of fielding a ball and throwing Carbonneau out at first.

“My own team booed my pitcher for doing it,” he said.

New Hampshire Bishop Robert Hirschfeld has been known to step into the lineup on the diocesan team, as he did July 16 at the team’s season finale. Hirschfeld’s predecessor, Bishop Gene Robison, devoted a five-page chapter in his 2008 memoir to describing his ministry among the women of the prison, including participation in their softball games.

“Let me tell you, these women play softball!” Robinson wrote. “It’s as close to a near-death experience as I ever hope to have. I fell over my own feet a few times and left the scene dirty and bloody. But I also fell in love with these women.”

Prison softball basically looks like regular softball. The field resembles other ballfields, except the outfield fence is topped with razor wire. The prison provides the equipment. Visiting teams are allowed to bring in only their gloves, hats and sunglasses. All other personal items are left with the guards before passing through security.

After walking through a series of secured doors, the visiting team ends up on the recreational yard, which includes the ballfield. The prisoners join them, and the teams spend 10 to 15 minutes warming up, Ambrosi said. Team colors have changed over the years, with the prisoners going from purple to the current red. The Episcopal teams’ shirts now are blue.

The blue shirts also feature the team’s motto: “Safe at Home With God.”

The visitors bat first. A prisoner who Ambrosi guesses is in her 60s serves as the official scorekeeper. There are some familiar faces year after year; other prisoners are released before making it to their second season.

Conversations between the visitors and the prisoners focus mainly on the game, sometimes including the weather. While other Episcopal ministries offer pastoral support for prisoners, that is not the purpose of the softball games, Ambrosi said.

“It’s more of a friendly ministry,” he said. It also gives his players a brief opportunity to get to know the prisoners. “I don’t think that the everyday Joe in our churches has a lot of exposure to people that are incarcerated, and we might have a different perception of the type of people they are.”

In fundamental ways, Ambrosi said, they aren’t much different from the Episcopal players.

As for athletics, the inmates reveal themselves to be softball players who have had ample time to practice. “They play hard. They’re really good,” Ambrosi said before recounting a tough recent loss, 24-23, to the prisoner team.

The games are played in the evening and last up to two hours. There are no strikeouts. Home runs are common, but the coaches advise against them. Too many home runs over the razor-wire fences and the teams won’t have any balls left to play with, Forbes said.

Forbes, at 65, has many years of experience both supporting the prison – he once served on its advisory board – and coaching softball. As with the teams he used to coach when his daughters played the game, his prison team ends its games by lining up opposite their visiting opponents for hand slaps and expressions of sportsmanship.

“Softball is life,” he said, explaining the sport can teach lessons in teamwork, patience and building relationships.

One prisoner told him she wanted to learn the game so she could play catch with her son once she got out. Another had no interest in the game but joined the team just because it was her only way to get time outside in the recreation yard. Prison life can be “soul-suckingly boring,” Forbes said.

Because of inmate classifications, no one convicted of violent crimes is out on the field during the games, Forbes said, but he rejects arguments that such activities, for any inmate, are inappropriate in a setting intended as punishment for a crime. Those critics are seeing prisoners “strictly from an ideological point of view,” he said, “a distorted belief system.”

Many of the inmates he coaches are struggling to turn their lives around after years of trauma on the outside, he said, and nearly all of them someday will become former inmates. For them to succeed when they return to the world outside, they need to learn how to build positive relationships, Forbes said.