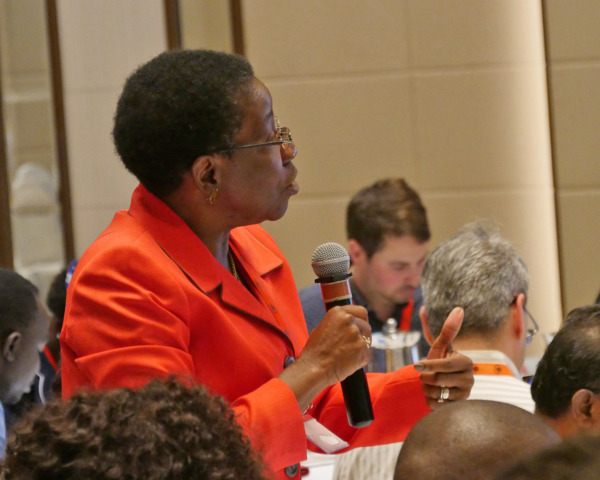 Episcopal Church ACC member Rosalie Ballentine of the Diocese of the Virgin Islands asks May 4 for more information about the new formula for calculating provincial contributions to the Inter-Anglican Budget. Photo: Mary Frances Schjonberg/Episcopal News Service

[Episcopal News Service – Hong Kong] A new formula for setting the level of financial commitments from the Anglican Communion’s provinces approved May 4 by the Anglican Consultative Council has the potential to greatly increases the amount of money expected from The Episcopal Church.

Anglican Communion Chief Operating Officer David White acknowledged that annual formula, based on the number “active bishops” in a province multiplied by their average salary (including housing costs) multiplied by 10 percent produces “the most extreme case of potential impact” for The Episcopal Church.

It would be up to each province to determine the two variables to plug into the formula. The only organization in The Episcopal Church that currently collects bishop and clergy salary information is the Church Pension Fund. It uses that information to calculate annual pension assessments and eventual benefit levels for each clergy participant in the fund. It has traditionally considered that information to be confidential.

Thus, it is impossible run the formula at this point. It was also unclear how the formula would impact the Church of England, which is the largest contributor.

The decision came during the last business day of the 17th meeting of the ACC, which ran April 28-May 5.

Historically the Church of England (at 41.4 percent of the total income) and The Episcopal Church (at 21.9 percent) have been the two largest contributors to what is known as the Inter-Anglican Budget. General Convention has budgeted $1.15 million as its total 2019-2021 contribution (line 412 here).

Ballentine told White “when we look at the proposed formula, just by throwing around some quick numbers, there are some of us whose contributions, voluntary or not but based on this proposal, would increase exponentially.”

She asked him for more details about a line in his report that mentions the communion office’s willingness to negotiate during a 2020-23 transition period with provinces whose expected contribution would dramatically increase or decrease.

“It is absolutely the case that there will be discussion,” White said. “I recognize that [this] is the most extreme case of potential impact. It is not the case that in our planning that we have assumed that it is possible for The Episcopal Church to move from the current position based on history to that which might be determined purely by strict application of the formula in the [transition] time period or potentially at all, but it becomes a basis for discussion.”

“The generosity of The Episcopal Church is not in question,” White said, given its budgetary contribution, Episcopalians’ involvement in the of the Compass Rose Society, which which contributes 21 percent of the communion office’s budget and the “additional bits of support that happen across the communion.” There is only the question as to how the formula “can be managed against that context,” he said. 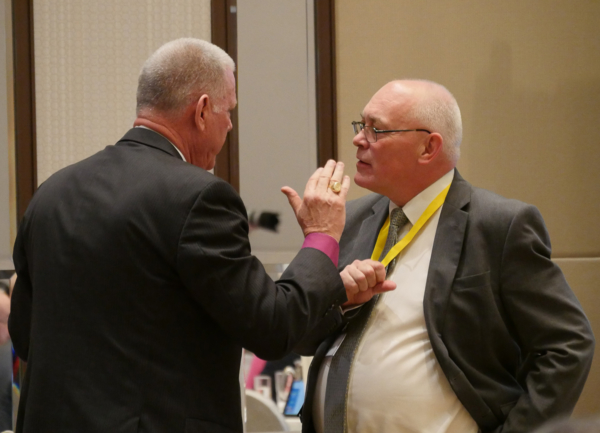 Combining the $1.15 million budgeted as its total 2019-21 contribution with money for “global mission development” and salaries and travel for church-wide staff who work with partners across the communion, the current triennial budget includes $3.89 million for mission and ministry in the Anglican Communion. The triennial budget does not include the work of Episcopal Relief & Development across the communion. The latest annual report is here.

The Inter-Anglican Budget is heavily dependent on the provinces’ contributions, which account for 73 percent of all unrestricted income. Ten of the communion’s 40 provinces and six extra-provincial churches contribute 94 percent of the income. They are (in percentage order) Church of England; The Episcopal Church; Australia; Aotearoa, New Zealand and Polynesia; Canada; Wales; Ireland; Hong Kong; Scotland and Japan.

White’s report said “several” provinces contribute “substantially below the sum requested.” According to a chart in the report, 16 provinces paid nothing in 2018. The non-paying provinces in 2018 were Brazil, Burundi, Central Africa, Central America, Congo, Nigeria, North India, Mexico, Pakistan, Papua New Guinea, Rwanda, South East Asia, South India, Tanzania, Uganda and West Africa. Fifteen paid nothing in 2017, 17 in 2016 and 16 in 2015.

The current voluntary contribution has been calculated based on the province’s historical contribution plus annual inflation. White’s report suggests that the number of active bishops in a province is a reasonable indication of its size and that what a province pays its bishops points to its financial strength. The formula would automatically adjust for numerical and economic growth and would automatically adjust for inflation, the report said.

The budget report said total income might increase by 20 percent to 40 percent if the proposed formula was applied and if half of the current non-contributing provinces started to make regular annual contributions.

The communion’s Standing Committee has regularly discussed “introduction of an operational sanction,” White said, and has considered telling those provinces which can afford to contribute but do not that their representatives to ACC meetings and the Primates Meeting would not be reimbursed by the ACC’s budget, as they are now. However, the resolution passed by ACC members does not include that provision.

In a separate resolution, the ACC accepted a six-year strategic plan for the Anglican Communion Office’s work that outlines work that could potentially at least double the office’s current annual spending of £2.0-2.5 million ($2.6-$3.2 million). It says that $6.6 million in spending by 2025 is “a reasonable ambition.”