Greek Orthodox Archbishop of Jordan and Patriarchal Commission to Bethlehem Theophylaktos leads Presiding Bishop Michael Curry through a courtyard as they make their way to his office in the Church of the Nativity in Bethlehem. The Very Rev. Hosam Naoum, dean of Anglican Cathedral Church of St. George the Martyr in Jerusalem, is at right. Photo: Mary Frances Schjonberg/Episcopal News Service

[Episcopal News Service – Bethlehem and Nazareth] The gift of spending Holy Week in the Holy Land grew deeper and more real on March 28 for those on pilgrimage with Presiding Bishop Michael Curry.

In a small sample of the ecumenical hospitality that the Episcopal Diocese of Jerusalem both enjoys and offers, Curry and those traveling with him were the guests of Greek Orthodox Archbishop of Jordan and Patriarchal Commission to Bethlehem Theophylaktos in Bethlehem. The group traveled there at his invitation to hold Morning Prayer in the St. George’s Chapel at the Church of the Nativity and meet with him. He also welcomed them to pray in the Grotto of the Nativity below the church, which is undergoing extensive renovation and conservation.

Theophylaktos later offered the group sweets, short glasses of brandy and small cups of Arabic coffee during the early-morning conversation in his office in the new, 250-year-old wing of the Church of the Nativity. The older part of the church is 500 years old. His office walls were lined with religious icons, as well as an icon symbolizing the 2 million pilgrims who annually visit the church: a flat-screen TV with nine camera views of the shrine. Five church groups had arrived at 5 a.m. that morning to tour the church. 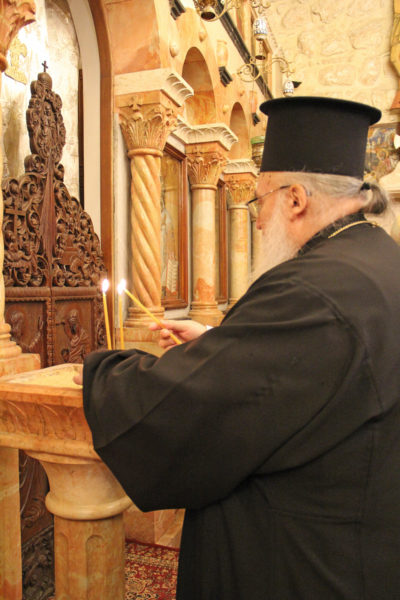 Greek Orthodox Archbishop of Jordan and Patriarchal Commission to Bethlehem Theophylaktos lights candles in St. George’s Chapel at the Church of the Nativity in Bethlehem. The archbishop opened the chapel to Presiding Bishop Michael Curry and those traveling with him to have Morning Prayer on Holy Wednesday. Photo: Mary Frances Schjonberg/Episcopal News Service

“It is a joy to be with you and to meet you,” Curry told Theophylaktos. “And I bring you greetings from your brothers and sisters in the Episcopal Church. We pray the blessings of the crucified and risen Lord on your ministry.

“We pray for you and for peace and justice in the whole world. We must learn to live as brothers and sisters.”
Curry addressed political realities in the United States, saying “our country is very troubled right now.

“Interestingly enough it is young people and young children who are raising their voices and calling for our country to live in love,” Curry said, adding in an allusion to the setting of the conversation, “it may be that as the Bible says, a little child shall lead them – again.”

Theophylaktos responded, “We must pray.”

Young people at Christ School, a ministry of Christ Church, the Anglican parish in Nazareth, later in the day spoke to the group about their efforts to make peace among Muslim, Jewish and Christian young people. To that end, Jerusalem Peacebuilders, which has roots in the diocese, promotes what it calls “transformational, person-to-person encounters among the young people of Jerusalem, the United States and the Holy Land.” Moreover, it provides them with the opportunities, relationships and skills to become future leaders for peace in the global community.

The United Thank Offering recently gave the group’s regional director, Jack Karn, a 2018 Young Adult Grant of $2,500 to help fund new in-school leadership and peacebuilding programs in the Galilee area of the Holy Land where Nazareth is located. Karn is from the Diocese of Vermont.

One young Palestinian Arab student told the group that he joined the organization because, as a Muslim, he wanted to build peace.

“I want my country to be back. I want Palestine and I want a solution to all the violence,”  Yousef Hassan said. 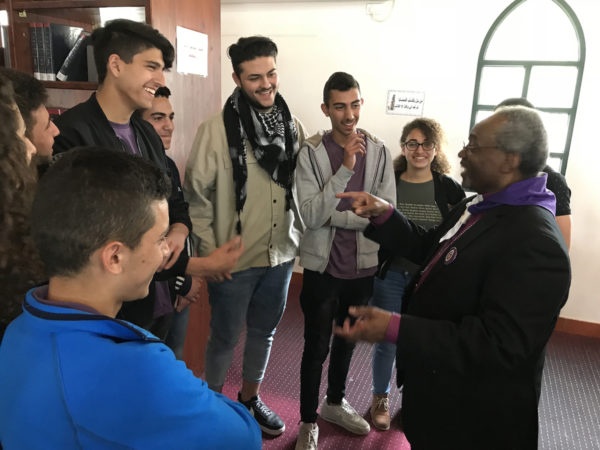 Some members of the Episcopal Diocese of Jerusalem’s Jerusalem Peacebuilders talk with Presiding Bishop Michael Curry after their presentation at Christ School, a ministry of Christ Church, the Anglican parish in Nazareth. Photo: Mary Frances Schjonberg/Episcopal News Service

He also said the program has helped him know himself better and become “a calmer person.” Because of all that goes on where he lives, he said, “it’s really hard to be a peaceful person or a calm person. Most people are really aggressive.”

Another Christian student, Ghenwa Abu Ahmad, said the camp experience taught her to see herself in others. “You see how similar you are, despite our differences in appearances or religion,” she said.

At the Church of the Nativity, Theophylaktos spoke of the peaceful relationship between his church and Anglicans, which is long-standing. While the Very Rev. Hosam Naoum, dean of Anglican Cathedral Church of St. George the Martyr in Jerusalem, translated for the archbishop, Theophylaktos used English to emphasize his point.

“We have a special love for Anglicans,” Theophylaktos said in English.

“They never hesitate to welcome us,” Naoum said. “When we come here, it is like coming home.”

Those ecumenical relations extend to the Armenian Orthodox as well, especially during their Holy Week, which this year begins on April 1, the Western Church’s date for Easter. Naoum said the Armenians consider Maundy Thursday to be the climax of Holy Week. As symbol of the relationship, the Armenian leaders invite the Anglican archbishop, currently the Most Rev. Suheil Dawani, to their liturgy that day, vesting him as an Armenian bishop and having him proclaim the Gospel.

During the Western Church’s Holy Week, the Armenians give Anglicans access to the Abraham Chapel in Jerusalem’s Church of the Holy Sepulchre for an afternoon Eucharist. That liturgy is not possible this Holy Week because the chapel is part of the church’s extensive renovation project. The church in the Old City enshrines Calvary and the empty tomb.

Later at the Church of the Annunciation in Nazareth, Franciscan priest Peter Hughes made the same point as he explained the centuries of ruins that were uncovered as the current church was built in the 1960s, a continuation of centuries of enshrining the grotto where the Archangel Gabriel appeared to Mary. The excavations have yielded parts of a 1st century building in which some members of what was then a sect of Christ-following Jews worshipped, a later basilica and the church built by the Crusaders.

“The interesting thing in the Holy Land, in terms of our ministry, is to show that [the centuries of] continuous Christian devotion are also supported by physical archeological evidence.”

“They knew something,” Curry agreed. “There’s a reason they were doing it there.” 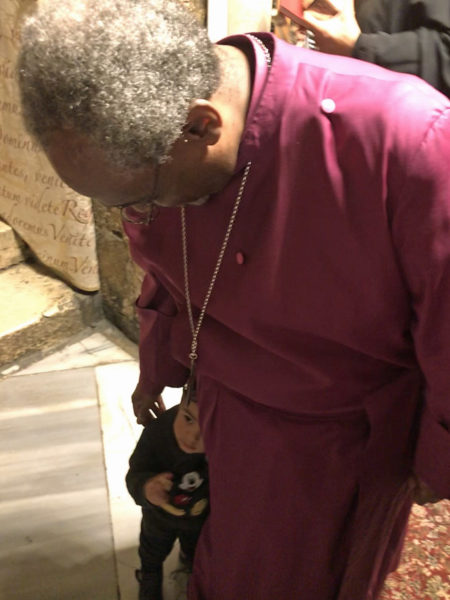 After Presiding Bishop Michael Curry prayed in the small Grotto of the Nativity shrine at the Church of the Nativity in Bethlehem, a small boy approaches him for a hug. Photo: Mary Frances Schjonberg/Episcopal News Service

Naoum said, “the challenge is how much we can keep that sacred” so that the week’s liturgies and other events remain as acts of worship rather than performance.

Still, religious tourism is part of the Holy Land economy, and at Christ School, the group heard from two 10th graders Sham Abuliel and Luna Khoury, and their teacher, Yemen Rock, about an Android app they and eight other students have developed as a mobile guide for pilgrims in Nazareth. They plan to market the app, in part, by selling chocolate bars, called Nazareth Chocolate, whose wrapper will have information about the app. It will also soon be available in the Apple App Store, Rock said.