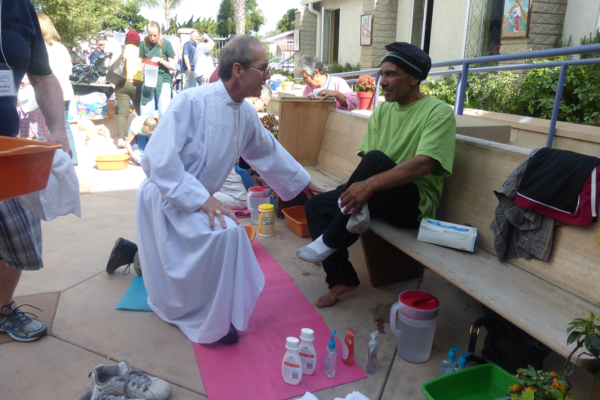 [Episcopal News Service] Foot-washing ceremonies, a tradition enshrined in the Book of Common Prayer, are part of Maundy Thursday observances in Episcopal churches everywhere, recreating an act of service that Jesus gave to his apostles as “an example, that you should do as I have done.”

But such acts of service don’t need to stop at washing feet. Some dioceses and congregations expand their Maundy Thursday activities to include foot-care clinics and free socks and shoes for the clinics’ patrons, who typically are the churches’ homeless neighbors. 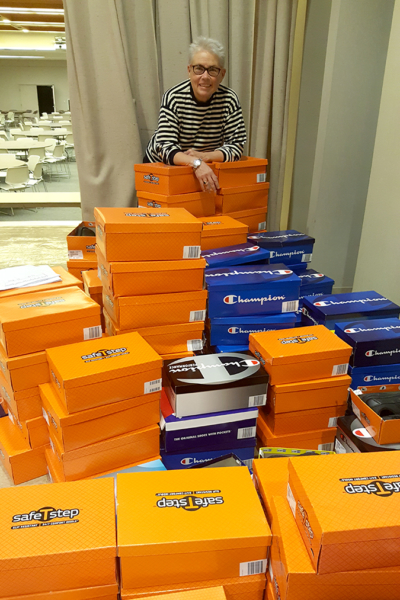 “For a lot of people who are poor and homeless, their feet are their primary mode of transportation,” said the Rev. Steven King, a priest at Trinity Episcopal Cathedral in Omaha, Nebraska, who is organizing the cathedral’s second annual Maundy Thursday foot-care clinic on April 18.

Similar clinics are scheduled for Maundy Thursday at St. Luke’s Episcopal Church in Jamestown, New York, and at Christ Church Cathedral in Cincinnati, Ohio, where the annual event goes by the name “Sole Clinic.”

“A lot of this is just talking and hanging out while we’re washing their feet,” said Cheryl Eagleson, the Sole Clinic’s lead organizer, told Episcopal News Service. The cathedral also offers a hot breakfast, bagged lunches and dozens of new shoes for clinic patrons to choose from.

And in San Diego, California, several Episcopal congregations work together on Maundy Thursday to turn the diocese’s Episcopal Church Center in the Ocean Beach neighborhood into a full-service stop, offering homeless residents a wide range of free services. Foot washing and shoe distribution play a prominent part, but patrons also can visit a shampooing station, get their hair cut, visit with a dentist or a doctor, take pets to see a veterinarian and listen to live music while enjoying a hot meal.

In Maundy Thursday services, the Book of Common Prayer recommends foot-washing ceremonies after the Gospel reading and homily. The Gospel readings recount the story of Jesus’ Last Supper with his disciples. Jesus washing his disciples’ feet is described in John 13:1-15, and in Luke 22:14-30, Jesus responds to a dispute among the disciples by admonishing them and commanding them to serve, rather than wield authority.

In congregations that take that call to serve a step further on Maundy Thursday, their foot-care clinics often complement well-established feeding ministries, through which volunteers already have established connections with the people whose feet they will wash. 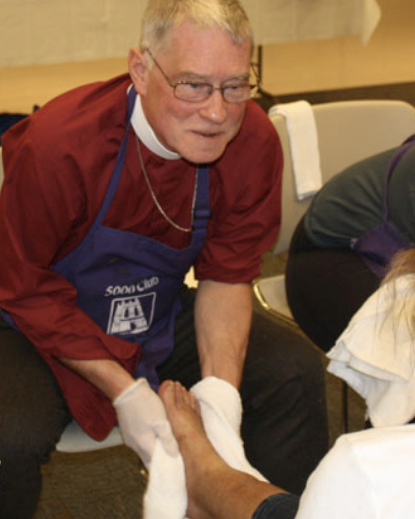 The feeding ministry at Christ Church Cathedral, in downtown Cincinnati, is called the 5,000 Club, and it typically draw more than 100 people to a free dinner every Tuesday. Eagleson, who serves as the cathedral’s head verger, makes announcements about the Sole Clinic on three Tuesdays leading up to Maundy Thursday, so those interested in participating can register and get their feet sized for new shoes.

Eagleson expects an even bigger turnout this year after distributing nearly 140 tickets to people at the 5,000 Club dinners. She upped the number of shoes purchased and is expanding the washing stations in the cathedral’s undercroft from eight to 12. The cathedral budgets about $2,500 for its sole clinic, mostly to cover the cost of shoes, supplies and a meal.

“It is a very important ministry to me,” Eagleson said. “Having the opportunity to serve one another in whatever capacity is a great thing.”

King, who serves as director of congregational life at Trinity Episcopal Cathedral in Omaha, said in an interview with ENS that he was inspired to start a Maundy Thursday foot-care clinic after hearing about a similar ministry at Trinity Episcopal Church in New Haven, Connecticut. He also saw an opportunity to build on the Omaha cathedral’s feeding ministry, which on Wednesdays serves about 100 homeless neighbors, many of them staying at a nearby shelter. 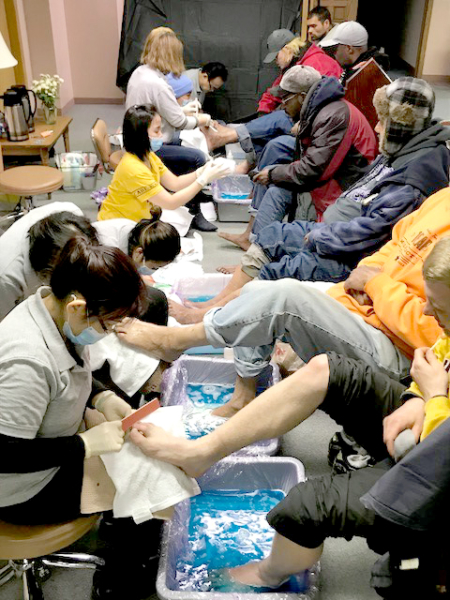 Volunteers from an Omaha, Nebraska, beauty salon tend to the feet of patrons at the Maundy Thursday foot-care clinic at Trinity Episcopal Cathedral in 2018. Photo: Steven King

Last year, at the cathedral’s first Maundy Thursday clinic, the congregation gave away 110 pairs of shoes, and with the publicity and word of mouth that the event generated, King is prepared for turnout to double this year.

Some people just come for the free shoes and leave, but others stay for additional services. A local beauty salon brings some of its workers to provide an enhanced foot-washing station, softening calluses and offering pedicures. A local podiatrist volunteers his time and advises guests on any health issues related to their feet.

Other priests have asked King for advice in replicating the clinic at their congregations. “It’s really not a hard thing to do but both reveals and proclaims a really important piece of our faith,” King said. He described this kind of loving service as “a preview of the kingdom of God.”

It also is a way to “live out Jesus’ example,” said the Rev. Liz Easton, the Diocese of Nebraska’s canon to the ordinary. Volunteering at last year’s clinic was a profound spiritual experience, she said.

“It made Maundy Thursday come alive in a really moving way, and I think there’s something about feet, the vulnerability of caring for someone else’s feet,” Easton said. “Jesus washing the disciples’ feet is an act of service and also of lovingkindness.”

The Diocese of San Diego provides the space for its Maundy Thursday foot-care clinic, but it is the volunteers from eight Episcopal congregations who make this annual ministry come alive. The San Diego event is now in its ninth year. 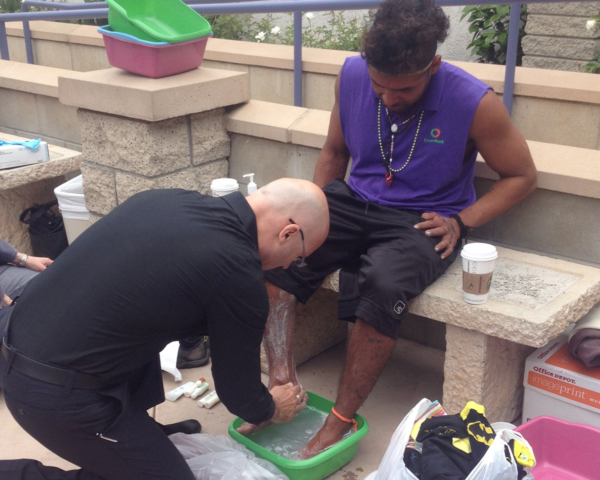 It, too, is connected to a year-round feeding ministry, where hot meals are served every Wednesday night and breakfast is served every Saturday morning. The Wednesday meals also are attended by nursing students from California State University San Marcos, Wilder told ENS, and those students will return April 18 to participate in the foot-care clinic.

Last year, about 40 volunteers served more than 300 patrons. The event starts with a Eucharist at 9 a.m. in the courtyard of the diocesan offices. Foot-washing and shoe distribution runs for the rest of the morning, and breakfast is served. In addition to the various services provided, the guests receive hygiene kits and a bag lunch.

They also are invited to simply pray and talk with the church volunteers.

Embedded in such acts of service is the Christian vision of the Beloved Community, Wilder said. “Washing feet is about welcome and respect and dignity and loving neighbors as ourselves.”