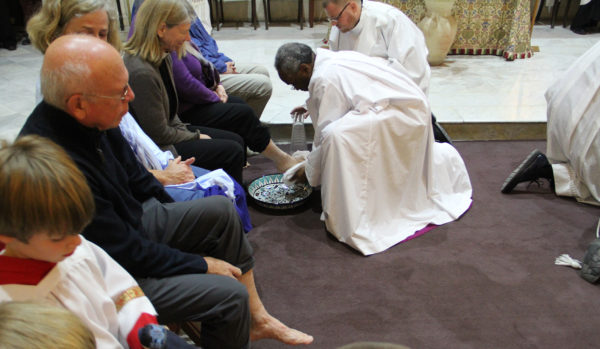 [Episcopal News Service – Jerusalem] Jesus’ commandment to his disciples on the night before he was killed, that they should love one another as he loved them, took on deeper meanings tinged with political challenges March 29 for those on a Holy Week pilgrimage with Presiding Bishop Michael Curry.

The group spent part of the day discussing the struggle for peace in the Holy Land, and part of the day participating in traditional Holy Week liturgies. Even then, they heard the call for justice and harmony among followers of the Abrahamic religions Judaism, Christianity and Islam, which each consider Jerusalem to be a holy city.

“As we pray for the peace of Jerusalem, as the Bible teaches us, we must find ways to work for the peace of Jerusalem, which will be found where there is true equality for all, true justice for all and true freedom for everyone,” Curry told Episcopal News Service, as he reflected shortly before the traditional Maundy Thursday Eucharist and foot-washing service. “Here it is clear that this is not simply an idealistic dream. It is the only hope, and we must not rest until it is realized.”

Curry’s complete reflection on his pilgrimage experience so far can be found here.

The group began the day with an early-morning visit to the site known to Muslims as Haram Al Sharif (the Noble Sanctuary) and to Jews as the Temple Mount. Mohammed Azam, director general of the Department of Awqaf Jerusalem and of the affairs of the Al-Aqsa Mosque, gave Curry and the group a tour of both the mosque and the Dome of the Rock. They also visited a museum in the complex. 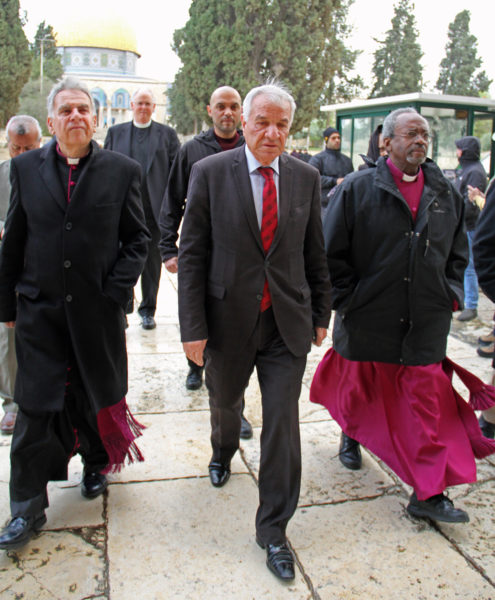 Presiding Bishop Michael Curry walks March 29 with Anglican Archbishop in Jerusalem Suheil Dawani and Mohammed Azam, director general of the Department of Awqaf Jerusalem and of the affairs of the Al-Aqsa Mosque, from the Dome of the Rock (in the background) to the mosque. Photo: Mary Frances Schjonberg/Episcopal News Service

Muslims believe that the Prophet Muhammad ascended from the site. They call it the Miraculous Night Journey, and it is commemorated in the architectural wonder known as the Dome of the Rock shrine. The 35-acre compound, which is administered by Jordan, also includes the remains of the Western Wall of the Second Temple, the most important religious site for Jews. Over the centuries, various groups of people have been banned from the site, depending on who controlled it.

Azam gave Curry and his group a summary of the recent conflict between Muslims, Christians and Jews over the site.

In the end, “as Muslims we have full respect for the Jews, because of their religion. We respect it,” Azam insisted, with the Most Rev. Suheil Dawani, the Anglican archbishop in Jerusalem, acting as translator. The problem, he said, is not the Jewish people, but is instead with “the politicians who are trying to impose their ideas on this place.”

Azam said Muslim and Christian holy sites are under attack, both through violence and via laws such as the recent struggle over an onerous Jerusalem Municipality taxation plan. For centuries, religious bodies in the city have been exempt from such taxes, but the municipality is now demanding millions from religious groups as part of an ongoing dispute with Israel’s finance ministry. He called this an “extremist and radical position.”

The Times of Israel recently reported that the Episcopal Diocese of Jerusalem has been hit with a bill of the equivalent of nearly $2 million. Azam said Muslim religious groups would owe $120 million. Even though the controversial plan was put on hold earlier this month, the diocese’s accounts are still frozen.

Saying that “we’ve been attacked by this government,” Azam said. “It seems there are no wise people in Israel.”

Azam contended that for 1,500 years there was “much tolerance and mutual understanding” between Christian and Muslims. “We lived together as one family,” he said, adding later that “it seems Israel does not like to see this kind of relationship between Muslims and Christians.”

He asked Curry to do what he could to work for peace in Jerusalem. 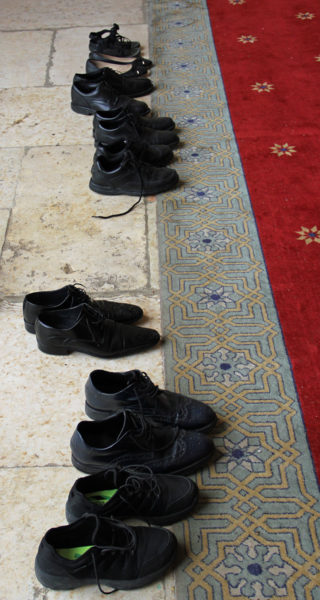 Shoes belonging to Presiding Bishop Michael Curry and those traveling with him wait outside the Al-Aqsa Mosque. Photo: Mary Frances Schjonberg/Episcopal News Service

Curry greeted Azam in the name of “your brothers and sisters in the Episcopal Church.”

“Following the lead of our brother and archbishop,” he said, gesturing to Dawani, who sat between them, “our church stands with you and with him for what is just and right.”

The presiding bishop said the Episcopal Church knows that Jordanian King Abdullah II “is a man of peace.”

“We will share your message and the story you have told with our people back home,” Curry said. “I was raised to believe that God made all people to be equal and all people to be free. Growing up as an African-American in America, the work for freedom and justice is deep in my bones.”

Later at the traditional Holy Week Chrism Mass, Dawani said in his sermon that Curry’s visit had “empowered us here in this land, especially in the difficult and challenging time we face.”

Clergy must preach God’s word to all, as well as to heal and teach, trying to transform the world the way Christ did, Dawani said.

“Being one of God’s ministers, we are used to the having the eyes of our parishes, and our parishes, our communities and also our traditions fixed on us, especially here in this land where we deal with so many governments,” the archbishop told the clergy. The diocese is spread over five countries — Israel, Jordan, Lebanon, Palestine and Syria. The challenge, he said, is to know how to deal with each of those governments “to keep the balance among all the governments of this region.”

Dawani said Anglicans must discern “how we carry Christ’s message at this difficult time in the midst of all the hardships and all the difficulties and how we stand up for our rights in order that the witness will continue, and our presence will be empowerment.” 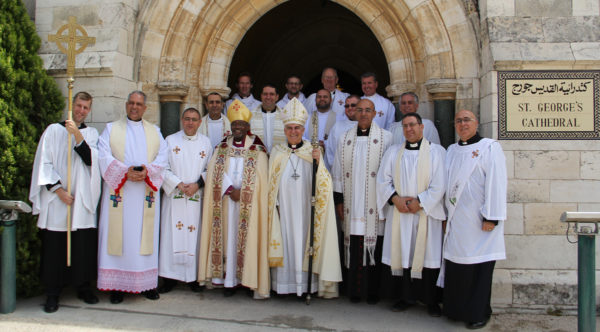 Clergy typically renew their ordination vows during the Chrism Mass, and Dawani said the question his clergy ought to consider while doing so is whether “we are able to have the courage to speak such words of truth, to speak up when all around us are silent. Are we prepared to take the risk for Christ by standing up for those around us who are downtrodden?”

The archbishop noted that the Anglican Jewish Commission recently met in Jerusalem to discuss migration and immigration, what he called “the most challenging issue at this time.” Dawani criticized, most especially, “politicians who cause all these troubles and cause innocent people to suffer because of their agendas, because they’re asking for more richness, they’re asking for more oil.”

“We discussed how we should deal with the stranger in our midst; how we are to welcome those who are different to us,” he said. He said the Christians at the meeting “became passionate about this,” recalling the parable of the Good Samaritan. “In our ministry, in our offering services to the people who are in need, we don’t differentiate. Black, white, Jewish, Christian, Muslims, we help those who are in need in the name of our Lord, Jesus Christ.”

Living in a land with three religions, Dawani said he knows “sometimes the political situation affects our relationships, but we should put politics aside” and remember that all people are made in the image of God, “whether he be a Christian, a Muslim or a Jew.”

Later in the afternoon, the presiding bishop and his group also had a strategic conversation about peace-building with Yusef Daher, executive secretary of the Jerusalem Inter-Church Center and Zoughbi Zoughbi, local program coordinator for the Ecumenical Accompaniment Program in Palestine and Israel.