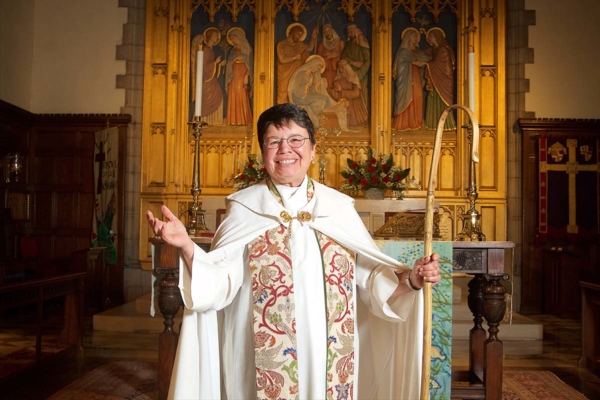 [Episcopal News Service] For the Diocese of Maryland, the road toward recovery has been marked by deep, soul-searching conversations and policy changes as well as a willingness to name and confront the challenges of addiction.

A fatal accident in late 2014 caused by a bishop triggered intense scrutiny from the public and from within the diocese. It also initiated a churchwide re-evaluation of alcohol and addiction policies.

The Diocese of Maryland has spent the past four years in recovery, asking difficult questions: What is our relationship with alcohol? How can we have honest and open conversations about addiction? How do we identify those struggling with addiction and support them in seeking help? What systemic changes need to be made within the system?

And most of all, they asked the question over and over: What can we do to seek healing for all involved?

Two days after Christmas in 2014, Heather Cook, then Maryland’s suffragan bishop, struck and killed cyclist Tom Palermo, a 41-year-old father of two. Cook’s blood alcohol level was .22 percent, nearly three times the legal limit for driving in Maryland. Both the justice and ecclesiastical systems responded: Cook is currently in prison, serving a sentence for vehicular manslaughter. She resigned her position with the diocese and was deposed, so she can no longer function as an ordained person within the Episcopal Church.

While the action has been adjudicated, the work of recovery is ongoing.

“We’re still in the healing process,” says the Rev. Cristina Paglinauan, associate rector for community engagement at Church of the Redeemer in Baltimore. “The conversations are still needed. It’s the type of thing that’s going to take a long time. We are healing, but there is still work to be done.”

A month after the accident, Church of the Redeemer held its first Recovery Eucharist, a service built around the program promoted by Alcoholics Anonymous and other 12-step-recovery groups. That service is now an annual offering.

The congregation hosts 14 different recovery groups, and a dedicated Recovery Eucharist felt like a next step to invite the “‘basement groups’ into the main sanctuary in the context of worship and prayer,” says Paglinauan. “We felt it was really needed for us to gather and pray.”

The Rev. Anjel Scarborough was serving at Grace Episcopal Church in Brunswick when the accident occurred. Like Church of the Redeemer, the congregation offered a Recovery Eucharist shortly after the accident and has continued its role as a leader within the rural community about ways to support recovery. In 2014, St. Peter’s offered the only AA meeting in town; Scarborough says that three years later, other churches had joined the efforts, and a 12-step meeting is now offered every day of the week within a five-mile radius.

This past Labor Day, the town held a community-wide event to pray for victims of addiction.

The congregation made other changes too. They decided that all church functions held on church grounds would be alcohol-free. The Recovery Eucharist became a monthly offering on Sunday evenings, and over the years, some members of the recovering community became involved in other activities at Grace.

“We have shifted into the long-term cultural work,” says Scarborough. “What does it mean to be in long-term recovery? How do we make space for people who are dealing with addiction? …What obligation as a worshiping community do we have to make sure all are welcome? And if we say all are welcome, what changes are we willing to make so that is a reality?”

Shortly after the accident, the Episcopal Church convened a task force to examine the issues of alcohol and drug abuse, and the 2015 General Convention passed three resolutions, including policies about serving alcohol in church functions. The Diocese of Maryland further strengthened those policies and has been proactive about implementation.

“I am a much stronger advocate for the implementation of our policies,” says the Rev. Scott Slater, canon to the ordinary for the Diocese of Maryland. “It’s like how an ex-smoker can become obnoxious about smoking policies. I make sure that if a group is not adhering to our alcohol policy, I speak up. That’s happened even at events sponsored by the wider church.”

Slater offers some simple, no-cost ways to adhere to both the letter and spirit of the policy, from providing alcohol-free zones at the diocese’s conference center to placing alcoholic beverages at the far end of a room and soda, water and fruit juices in more accessible locations. The diocese also has collected resources and developed a page on its website.

For Slater, the issue is personal on many levels. A recovering alcoholic himself, he knows intimately the struggle with addiction. Cook called him from the scene of the accident, and he took her to the police station. And he lives two blocks from the family of the victim and regularly sees Palermo’s widow walking her children to school.

“We are healing,” Slater says. “The wound is covered up by a scar, but the scar will always be there. It will never go away. And it’s important that it doesn’t. This is a scar that will remind us to never do that again, to never fail Heather or the Palermos by not seeing the signs or intervening earlier.”

While Slater and others were in the diocese when the accident occurred, Bishop Chilton Knudsen, resigned eighth bishop of Maine, came to Maryland several months later, in part to help lead the healing process. Knudsen has been a public voice for the ministry of recovery and support for those in addiction. She recently celebrated 30 years of sobriety. Knudsen regularly visits Cook in prison: “Heather is my sister in Christ and my sister in recovery.”

Knudsen gauges the diocese’s recovery on a number of factors, including how and when people talk about Cook. For a while, the discussion focused on blame, with anger directed at Cook as well as the diocese and the larger church.

“When I first came to Maryland, people were so obsessed with Heather that they could hardly talk about anything else. Now the conversation is broader, part of a bigger look at the system,” says Knudsen. “People have come to say, ‘Yeah, there was a mix-up at every level. Fingers could be pointed in lots of directions. It’s not fair to make Heather the sole scapegoat in this.’ There is responsibility to be shared—and action to be taken—throughout our systems.”

In tangible ways, that has meant a number of changes to build and encourage an atmosphere of health. The diocese has held a series of clergy gatherings, with a particular focus on how to tell the truth to one another, how to ask for and extend forgiveness, and how to monitor the quality of discourse.

Knudsen says there’s intentional work in living into the vision of the diocese set by Bishop Eugene Sutton: “The Diocese of Maryland is a community of love.”

“That means asking the question in clergy gatherings, staff meetings and visitations: What is a community of love? What does it look like? How do we know it when we see it?” she says. “At the last clergy day, we had a couple of painful episodes where people were deeply disrespectful to each other, and this galvanized several groups to say, we have to do better.

We need to focus on the quality of our public discourse. We want to make a witness of careful and deep listening.”

The entire diocesan staff underwent training for Narcan, a medication used to reverse the effects of opioid overdose. Now, many parishes are also taking the training and learning how to be first responders, says Knudsen.

Another indication of this healing work: Knudsen says she knows of seven clergy who have entered into recovery.

“Our trust with each other has grown,” Knudsen says. “We’re able to admit that this impacted us. We were a mess, and we needed to take a deep look, not just put up a smokescreen. We have come to realize that this wasn’t about one suffragan bishop and the worst thing she has ever done in her life, but a whole climate that fosters denial and blaming rather than compassion and proactive outreach.”

For Scarborough, this period of recovery has helped shed light on addiction.

“Having come out of a family with a number of extended family who have addictions to drugs and alcohol, I know that any of us can fall down that rabbit hole, given the right set of circumstances,” says Scarborough, who now serves as priest-in-charge at St. Peter’s in Ellicott City. “Addiction is part of the human condition, and we must be aware that we all have the capacity for addiction. We must ask ourselves, ‘Where have we substituted something for God?’”

While she believes the diocese and many individuals have come a long way in the healing process, Scarborough acknowledges that challenges continue.

“I keep praying that some time we won’t hear jokes about Whiskey-palians or the one about where two or three Episcopalians are gathered, there’s a fifth,” she says. “If those jokes could die in my lifetime, then we’ve done good work. I’d like to be known for the love of Jesus, you know? For people to say: Episcopalians, they show the love of Jesus.”

-Richelle Thompson is deputy director and managing editor of Forward Movement, a ministry of the Episcopal Church committed to inspiring disciples and empowering evangelists.