Marriage rites resolution heading back to House of Deputies

[Episcopal News Service – Austin, Texas] The House of Bishops made a “technical amendment” before approving a resolution meant to give all Episcopalians the ability to be married by their priests in their home churches.

The House of Deputies, which had overwhelmingly approved a heavily amended version of Resolution B012 on July 9, now must reconsider the resolution and debate the amendment. General Convention resolutions must be adopted by both houses with the same texts.

The bishops’ amendment does not change B012’s goal of giving full access to two trial-use marriage rites for same-sex and opposite-sex couples approved by the 2015 meeting of General Convention (via Resolution A054). B012 began in response to Resolution A085 from General Convention’s Task Force on the Study of Marriage, which was proposed in part to give a way for Episcopalians to use the rites in eight dioceses of the church’s 101 domestic dioceses in which the diocesan bishop refuses to authorize use of the trial-use marriage rites.

Resolution A054-2015 said that clergy could only use the rites under the direction of their bishop. The original version of B012 would have required bishops who would not authorize the rights to allow any congregations to receive Delegated Episcopal Pastoral Oversight (DEPO) from another bishop who would provide access to the liturgies.

Deputies agreed to a version of B012 that took away the DEPO option and placed the decision-making power for using the rites with rectors or other clergy in charge of congregations. The bishops’ amendment comes in the seventh resolve of the resolution and adds the words “provided that nothing in this resolve narrows the authority of the rector or priest-in-charge (Canon III.9.6(a)).”

Chicago Bishop Jeff Lee said the addition was made “simply to make clear as we can that this resolution is not in conflict with the provisions of the ministry canons of the church regarding the authority of rector or priest in charge of congregations. It’s a very, in some ways, technical amendment, but we thought it was important in consultation with the chancellors to add it.”

In the debate that followed, the amendment was left behind as 12 of the 13 bishops who rose to speak supported passage of the resolution. Some were adamant in their support, some were reluctant in their support for sometimes opposing reasons while Albany Bishop William Love was adamant in his opposition.

Western New York Bishop Bill Franklin said he supported the resolution “because it moves us another step away from the situation of separate but equal to which we have often consigned our LGBTQ sisters and brothers.”

Rhode Island Bishop Nick Knisely, one of the three bishops who offered the original B012, said even the heavily amended form of the resolution that came from deputies still gives the bishops who will not authorize the use of the rites a way to feel “fully a part of this church.” Moreover, he said, much of the testimony in legislative committee hearings portrayed the resolution as “a way forward. I don’t think this is a permanent a way forward, but this buys us time.” 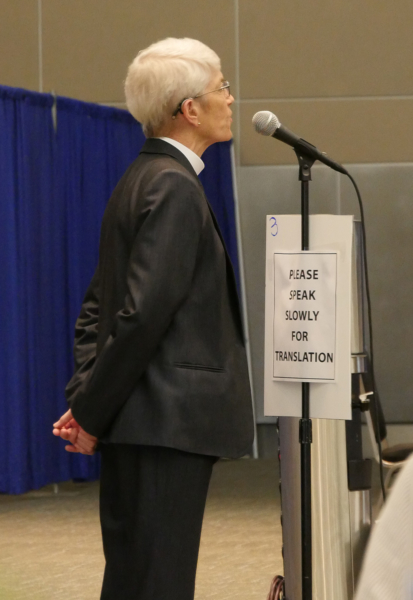 New York Assistant Bishop Mary Glasspool speaks to her colleagues in the House of Bishops July 11 during their debate on Resolution B012. Photo: Mary Frances SChjonberg/Episcopal News Service

Time, he said, could allow the church to do what the previous speaker said ought to happen. “I don’t think we have unwrapped the gift of gay and lesbian relationships and really celebrated them,” said New York Assistant Bishop Mary Glasspool. “It’s time not only to support marriage equality, but to honor the gift that many of my brothers and sisters are.” Their partnerships ought to be celebrated “the way we celebrate other partnerships in this church.”

Bishop Dan Martins of Springfield, one of the eight bishops who will not authorize the rites, said he would support B012 and was “immensely and seriously grateful” for its compromise. That said, Martin told the house he was “taking my gratitude with a side of Valium because I am deeply concerned” that removing the bishop’s ability to act as the chief liturgical officer and “chief teacher” in the diocese will begin to “erode the sacramental relationship between a bishop and a diocese.”

Bishops were limited to two minutes at the microphone. However, Love of Albany spoke for nearly 10 minutes, despite being told that he was exceeding his time. He said the passage of B012 would put him in the awkward position of violating parts of his ordination vows.

“There has been a lot of discussion as we have struggled with this issue over the past several years on whether or not sexual intimacy within that of a same-sex couple was appropriate,” he said. “There are many in this church who have proclaimed that it is and that this is a new thing that the Holy Spirit is revealing and that the Episcopal Church is being prophetic in putting this forward and ultimately the rest of the body of Christ will come to understand that.”

Love added that the church has listened to people’s personal experiences and “to feelings, their emotions, but we have not had an honest look at, sir, at what God has said about this issue and how best to help people who find themselves in same-sex relationships.”

Idaho Bishop Brian Thom, who served on the Task Force for the Study of Marriage and the committee that reviewed the resolutions, said he supported the resolution with reservations. “The strongest message we received was not about ecclesiology,” he said.

“The most pastoral thing that was being asked for and, for me that most valuable, was that folks just wanted to be married at home,” he said, referring to situation where bishops tell same-sex couples they must go to a different diocese and be married by a priest who is a stranger to them.

“I’m convinced by that,” he said. “My heart breaks for those folks who have not been able to do that, but now they can, and rectors and bishops have a space.”

“This is the right move that allows us all to go forward and, while I feel I have thrown with my votes for B012 my LGBT brothers and sisters under the bus, there is now a way forward for them to be married where they want to be married — at home. And all of you who have stood at an altar before a couple like that know how important that is. So, for them, I am going to vote in favor of this.”

The resolution passed on a voice vote with a handful of noes.