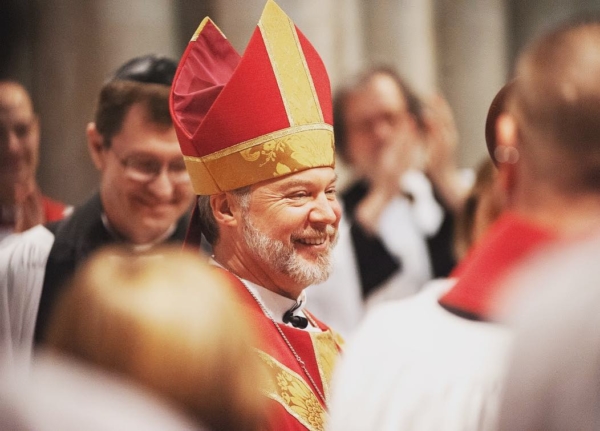 Newly ordained and consecrated Bishop in Charge of the Convocation of Episcopal Churches in Europe Mark Edington greets the congregation April 6. Photo: American Cathedral in Paris via Facebook

Presiding Bishop Michael B. Curry led the ordination and consecration and investiture.

The Old Catholic Church of the Netherlands is in communion with the member churches of the Anglican Communion. The festival liturgy included 35 additional bishops, 70 priests and 315 lay worshipers.

The preacher was the Very Rev. Andrew B. McGowan, dean, president and McFadden Professor of Pastoral Theology and Anglican Studies at the Berkeley Divinity School at Yale.

Edington is the second elected bishop in charge, succeeding Whalon, who completes 17 ½ years in the post. Edington was elected on the eighth ballot on October 20, 2018. The election took place during the annual convention of the convocation in All Saints Church in Waterloo, Belgium. Edington was rector of Saint John’s Episcopal Church in Newtonville, Massachusetts, and director of the Amherst College Press.

The celebration began on Friday evening, with a farewell and welcome event that can easily be described as a gala. Multiple exchanges of gifts were a feature of the evening, from a Gertrude Stein libretto composed in 1929 (for Whalon) to a black Convocation T-shirt (for Edington). Speeches lauding and ribbing both men competed with a lavish spread of food, much of it carried to Paris from the Convention’s nine churches and 11 missions spread across France, Germany, Belgium, Switzerland and Italy. The Nelson Three, a band composed of three young parishioners from Wiesbaden, offered musical interludes culminating in sporadic dancing toward the end of the evening, especially during the rendition of the Beatles’ “Can’t Buy Me Love.”

The order of service on Saturday morning opened with a musical mini-feast: five preludes—two by Durufle, and one each by de Victoria, Mendelssohn and Dvorak—sung by the American Cathedral choir under the direction of Canon for Music Zachery Ullery. Andrew Dewar, organist of the Cathedral, then performed an organ piece by Bach.

The service differed in one notable respect from what Episcopalians in the U.S. are accustomed to. The Litany for Ordinations was sung by the cantor in English and then in the four other languages of the Convocation—French, German, Italian and Spanish. (A Spanish-language mission operates from the Church of St. Paul-Within-the-Walls in Rome.) A bagpiper had the last notes, providing the musical accompaniment to the recessional. Some of the clerics in the recession were seen skipping to the beat.

Bishop Edington is a trustee of his alma mater, Albion College in Adrian, Michigan, where he received an A.B. in philosophy and political science summa cum laude; he graduated from the Fletcher School of Law and Diplomacy at Tufts and the Harvard Divinity School. He is a life member of the Council on Foreign Relations and has written frequently on the intersection of diplomacy and religion for such publications as the New York Times, the Christian Science Monitor, the Atlantic Monthly and the Huffington Post. His wife Judith is a graduate of Albion College, Boston College and Harvard Law School. She is a tax attorney.

The new bishop’s background in ministry, law and foreign relations seems tailored to the role he is taking on, managing an Episcopal presence in Western Europe, which he calls the most secular place in the world. He has described this mission as “teaching the rest of the church” what it will look like in 40 years. This, in his eyes, makes the Convocation the future of the church.

At a press conference on Friday morning, Edington linked this future challenge to the Jesus Movement, which Presiding Bishop Curry has made a central feature of the Episcopal Church in America. This point came up throughout the weekend. In his sermon on Saturday, Dean McGowan declared that “Christendom is over, and this is not bad news. It’s good news. That’s over but the Jesus Movement isn’t over.” Turning to the new bishop in charge, he said: “So Mark, welcome and go away,” as God calls us to look out and not within, bringing the message of the inclusiveness of love to the unchurched people of Western Europe.

The Presiding Bishop concluded the weekend with a rousing sermon on Sunday morning, challenging the packed cathedral to approach Holy Week as a time to discern love as the secret of life itself. “This love can transform us all,” he said, as if speaking not just to the convocation but to the secular peoples of Europe. It was a dramatic sendoff, a welcome and go away, to the brand new Bishop in Charge.

The post Mark Edington ordained and consecrated as 26th bishop of the Convocation of Episcopal Churches in Europe appeared first on Episcopal News Service.