Love is in the hair

[Episcopal News Service] With a comb, a pair of scissors, and commitment to love and serve, Barbara Goodson and her team offer a modern-day type of foot washing to thousands of the homeless and dying, to those just out of prison and others moving through recovery.

Goodson’s ministry, Have Shears Will Travel, offers free haircuts to folks in need throughout Houston, Texas. What began as a dream in 2015 with a hundred haircuts has grown to a goal of 8,000 cuts this year. 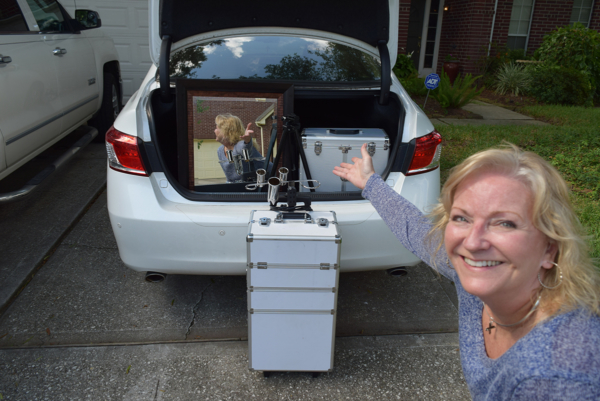 “I believe we’re supposed to bring the kingdom of God to everyone we meet. I believe that’s our mission: reconciliation,” said Goodson, a member of Christ the King Episcopal Church in Humble, Texas. “My gift is giving a haircut. Our ministry has been called a modern-day foot washing. Just as Jesus washed the disciples’ feet, we perform our kind of foot washing…We’re not giving a sermon, we’re not preaching. We don’t have a medical center, and we’re not doctors. But I think we offer a healing touch and restoration of dignity.”

The value of a haircut

For many of Goodson’s clients, the service is far more than a trim and a new hairdo.

“We touch the untouchables. Many of these people haven’t been touched with kindness in a long time,” said Goodson. “There aren’t many ministries that actually touch people in the way we do.”

As the ministry has grown, Goodson has brought on four stylists, two full time. They visit more than 40 different ministries with their mobile hair salon, a converted RV. For some of their clients, the haircut is the first in years. 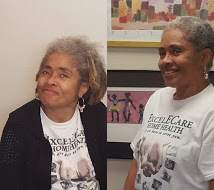 Glenda a client of Angela House before and after photos. Photo: Courtesy of Barbara Goodson

Goodson recalled a visit to Angela House, a transitional home for women coming out of incarceration. A woman named Glenda sat behind her, wearing a huge bonnet and watching as Goodson worked on several other clients. Finally, she mustered the courage to ask if Goodson could do something with her hair.

“You could tell Glenda was nervous,” Goodson said. “Her dreadlocks had grown out—it had been years since she had her hair cut, and it was so knotted that I couldn’t get clippers through it. But we kept working and shaping it. When we finished, (one of the staff members) walked in, took one look at Glenda, and said, ‘Praise Jesus!’”

Goodson continued to cut Glenda’s hair and gave her a last haircut before her death from cancer.

The women of Angela House “love this ministry,” said Allison Cleveland, the home’s office manager. When the women get out of prison, they arrive at the home with very few belongings. Angela House provides the necessities, but hair care doesn’t make the cut.

The ministry “is so much more than just a haircut,” Cleveland said. “The stylists that Barbara chooses are always very kind. They’re like mini-therapists, listening to the women, boosting their confidence, telling them they look beautiful.”

Most people take for granted the ability to jump in their cars, run to a beauty salon, and then continue on their day, Cleveland said. “But for some of these women, it’s been a long time since they’ve experienced such a kindness. When they come in here, their spirits are broken. This moment of kindness is one of the first steps in mending that broken spirit.”

Goodson has had a barber’s license since 1978, but she spent most of her life in the oil and gas industry, a single mom working her way up the corporate ladder. In 2015, she attended a diocesan event in which Diocese of Texas Bishop Andy Doyle challenged the congregation: “You all have a gift. Now you need to figure out how to use your gift in the community.” The message stirred a deep longing within Goodson. Two days later, she learned that her company’s office was closing, and she would no longer have a job.

Now remarried, Goodson said she sat down with her husband and told him, “I think I’m supposed to give free haircuts. I think this is what I’m supposed to do.” He said, “’well, ok. But you’re not going to get paid for these haircuts?’” I said, “No. It’ll be fine. It’ll work out.”

When she started the ministry, Goodson figured she’d give a few haircuts a week. She called Lord of the Streets, an Episcopal homeless outreach, and they set her up in a basement with a swivel chair and a table. Word started to spread, and invitations kept arriving. In the corner of her mind, in a place where pipe dreams too often have cobwebs, Goodson imagined a mobile hair salon.

She had never applied before for a grant, but she tackled a 25-page document from the United Way—and received a check for $5,000. Then she started soliciting donations from other churches and nonprofit organizations. She found a used motor home that seemed perfect, but it was out of reach at $20,000. After hearing her story, the owner sold it for $10,000. Goodson hired her brother to convert it; in retrospect, her brother probably made $1 per hour, Goodson laughed.

In 2017, when Hurricane Harvey hit Houston, Have Shears Will Travel was there at the NRG Stadium, giving haircuts to people flooded out of their homes. At a hospice center, attendants held up a stroke victim so that Goodson could cut her hair, blow it out, and curl it. Goodson held up a mirror to the woman, who hadn’t spoken in months. She held up two thumbs, and as Goodson walked out, the woman mustered two simple words: “Thank you.”

David Hill, who started a street-church ministry more than 20 years ago, has seen many outreach programs—including groups offering haircuts—come and go. Have Shears Will Travel is different, he said.

“For the homeless to be able to go inside the motor home and be pampered, it’s a special blessing from God. It’s like going to a beauty shop,” said Hill. The offering is so popular that he and his team take reservations for the monthly mobile salon visit.

“I think a lot of people might not even need the haircut, but they go in for the loving treatment that they receive…There’s not much love in the street. There’s a lot of hatred. To experience this kind of love is experiencing the love of Christ.” 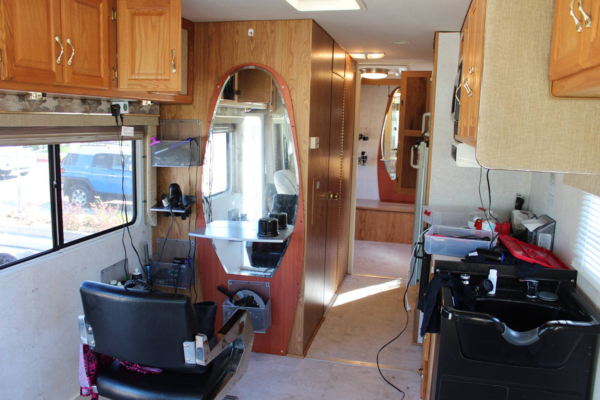 The inside of the mobile hair salon. Photo: Courtesy of Barbara Goodson

Arron McLaurin has been barbering for more than 10 years but this past year, since he joined Have Shears Will Travel as a part-time cosmetologist, has been the most meaningful.

“It’s a different thing when you’re doing hair for the money,” said McLaurin. “For a long time, it was a career, but now it’s more of a calling for me to be able to help people. When people come to us, they feel like there’s hope again, that somebody loves them.”

Goodson, now 66, will never forget a haircut that she gave 30 years ago to 9-year-old Kayla. The young girl had one leg amputated because of bone cancer.

“I went to her home, sat her on a stool, and put a cape around her,” said Goodson. “Her hair was straggly from all the chemotherapy. When I was done, we carried her to the mirror, and she began singing, ‘I feel pretty, oh so pretty.’ Every heart melted in that room; they knew what she was saying was true.”

In mid-February one of the barbers had an accident in the mobile salon. Goodson was worried: Would this be the end of the ministry? Ultimately, the other driver’s insurance not only covered the claim but also donated $1,000 to the ministry.

“Getting a new haircut can make me feel like I’m taking a new step, and hopefully that’s the same for our clients. They see this physical change—they see a new person in the mirror—and hopefully it helps empower them to be the person they want to be. Maybe it’s to find a job, or take the next step in a recovery program, to heal from PTSD, or to help remove the shame of being trafficked,” Goodson said.

“When we say our Baptismal Covenant, we say we will respect the dignity of every person. People who are sitting in our chairs don’t believe they have much dignity; what we’re doing is imparting a sense of dignity, reminding them of their worth as a child of God.”

–Richelle Thompson serves as deputy director and managing editor of Forward Movement, a ministry of the Episcopal Church that seeks to inspire disciples and empower evangelists.

The post Love is in the hair appeared first on Episcopal News Service.