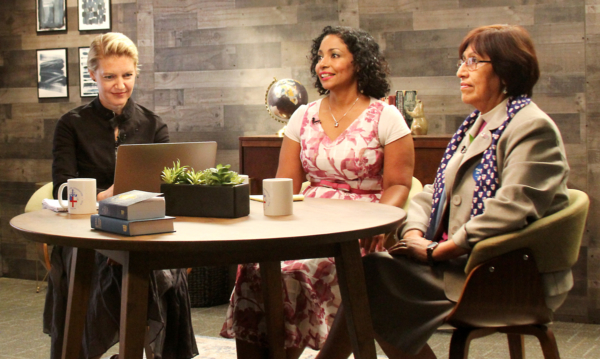 Special edition of Inside General Convention focuses on Cuba

What once was lost can now be found

With as many as 10,000 busy people scurrying around the Austin Convention Center and surrounding hotels for committee meetings, legislative sessions, Exhibit Hall shopping and chance encounters with friends, it’s inevitable that some of them will misplace some of their belongings. Some of that paraphernalia winds up lining the counter of the Information Center. 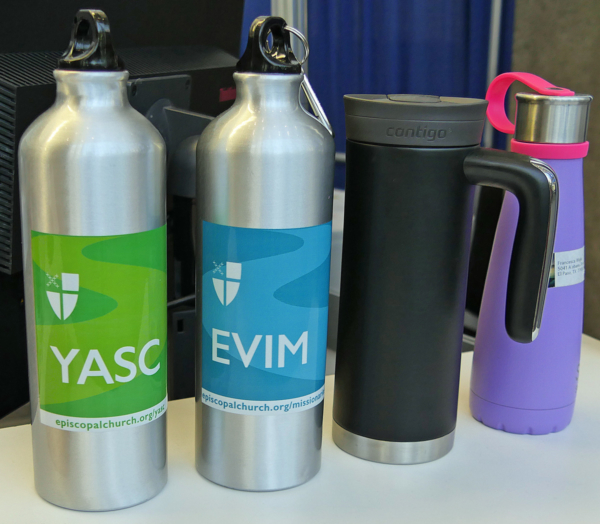 The size of the lost water bottles collection waxes and wanes as people come to the Information Center to claim their hydration device. Photo: Mary Frances Schjonberg/Episcopal News Service

With participants being warned to keep hydrated under the blazing Texas sun, water bottles and sunglasses are the most common stragglers, according to volunteer Louise Horner of Marysville, Missouri. Two folding hand fans were in the lost and found the morning of July 11.

Some larger items go astray at times. Volunteer Beth Deleery of Austin said one participant jokingly stopped by to see if the volunteers could look for her spouse.=

And, ever the theologians, some convention participants, invoking the information services of the booth, have asked if any of the volunteers know the meaning of life. 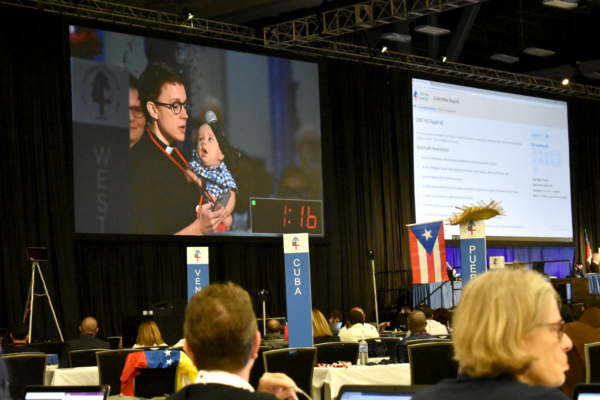 A July 5 misunderstanding of the Rules of Order that allowed for the President of the House of Deputies’ discretion to permit babies to accompany deputies onto the floor has been clarified by the passing of Resolution D087 on July 11 of the 79thGeneral Convention. The resolution spells out who is permitted on the floor, and now includes “infants under 1 year of age with a parent or guardian who is a deputy; children over 1 year old who require nursing or bottle-feeding only while feeding; and caregivers of children to bring a child to a feeding parent when the child needs to be fed, escorted in and out as directed by the President.” A “designated feeding area” will be present on the house floor that provides for voting access, but a parent will not be required to use it.

The House of Bishops, meeting during the 79thGeneral Convention, on July 11 adopted a resolution that attempts to answer the question of how social justice fits into the mission and ministry of the Episcopal Church. Resolution A056 directs the  presiding bishop and president of the House of Deputies to appoint a Task Force on the Theology of Social Justice Advocacy as Christian Justice. The bishops approved the resolution without debate.

If the $15,000 that is requested for the work is allocated, the committee would be tasked over the next three years to consider scripture, approved liturgical resources, other theological texts and previous actions of General Conventions to summarize ways in which the Episcopal Church understands the work of social justice as an essential mission and ministry of the Christian church.The resolution also directs that the task force study how the Episcopal Church currently fosters theological understanding and leadership for social justice as well as recommend ways to foster theological and practical conversation on social justice.