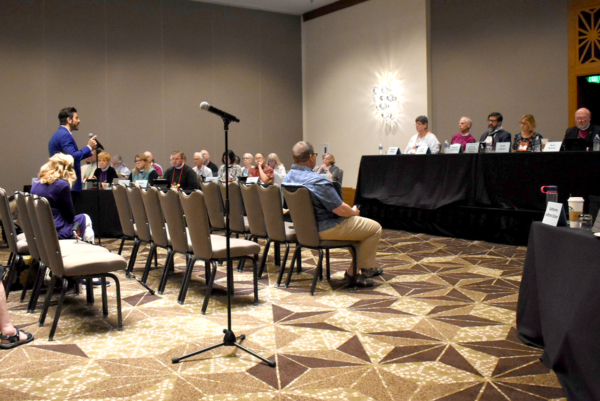 [Episcopal News Service – Austin, Texas] Dozens of people representing a broad range of interreligious voices testified July 6 at a joint hearing on resolutions related to Episcopal Church policy toward Israel and Palestine, a contentious issue at past General Conventions that this year was discussed openly and, for the most part, cordially.

Some read their prepared statements by scrolling their smartphones or shuffling through notes on paper. Others gave testimony from memory or off the cuff, and many of the nearly 50 people who addressed the committees shared grim examples of life and death in the region, from Gaza to the West Bank.

“I’ve heard stories of hope and stories of pain, from both Israelis and Palestinians. We need to listen to both,” said retired Bishop Ed Little, previously of the Diocese of Northern Indiana, who spoke from his experiences during a pilgrimage to the Holy Land.

The Social Justice and International Policy Committee and the Stewardship and Socially Responsible Investing Committee of the 79th General Convention met jointly with the goal of getting the resolutions to the House of Deputies by July 8, part of an expedited process outlined by Presiding Bishop Michael Curry and the Rev. Gay Clark Jennings, House of Deputies president.

That process was recommended by a task force formed by Curry and Jennings after the 2015 General Convention to look at ways to ensure a full, open and productive debate on such thorny issues as whether to divest church funds from companies that profit from the Israeli occupation of Palestinian territories.

So far, the reaction to those changes has been positive, and the openness of the debate was readily evident to the more than 100 people who attended the 2.5-hour hearing in a ballroom at the JW Marriott hotel just west of the Austin Convention Center.

Several pro-Palestinian organizations mobilized individual representatives and groups of people to testify, helping to tilt the balance of views in favor of approving resolutions calling for a tougher stance against Israel and greater promotion of peace. A small but forceful minority spoke in defense of Israel – or to assert that this decades-old conflict defies easy assignment of blame.

“It’s a family fight, and like a family fight, there are two sides,” Katy Dickinson, a deputy from the Diocese of El Camino Real in California, said in her testimony supporting Resolution D027, seeking justice in Gaza. “It’s mostly Israel’s problem,” she said, but Hamas also is firing missiles and needs to be part of the solution.

But if this conflict is a family fight, Tarek Abuata, a Palestinian Christian from Houston, Texas, sought to undercut the analogy with a variation of his own.

“It is not a fight. It is not a family fight when my father has been abusing my mother and raping her for 70 years,” Abuata testified. He is executive director of Friends of Sabeel North America, a Christian group that supports the Palestinian cause and that was represented at the hearing by several members.

The two committees have been assigned 15 total resolutions on issues related to Middle East peace, including the civil rights of Palestinian children, the status of Jerusalem, supporting Palestinian-owned businesses and preserving the right to boycott as a form of protest against the occupation. Some resolutions with overlapping topics may be combined before the committees decide whether to recommended them to the House of Deputies and House of Bishops for approval.

The various resolutions often generated passionate testimony from deputies and other Episcopalians, as well as members of the Lutheran, Presbyterian, Jewish, Muslim, Mennonite and Quaker faiths.

They spoke of Palestinians’ homes being bulldozed, of Palestinian children being ripped from their families and jailed, of the “racist extremism” that had turned Palestinians into second-class citizens in their own homeland. Their testimony described the Palestinian territories, particularly Gaza, as a “nightmare,” “concentration camp,” “prison camp” and the equivalent of the Jim Crow era of segregation in the United States or the former system of apartheid in South Africa. 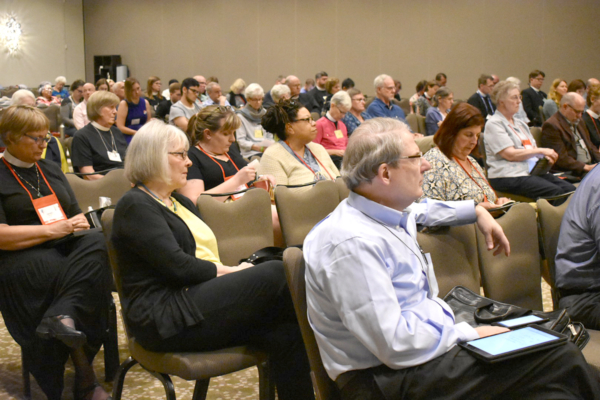 Comparisons to apartheid was underscored, though not explicitly, by a joint statement issued July 3 by Archbishop Desmond Tutu, the Anglican leader who was a pivotal figure in the fight to end apartheid, with former House of Deputies President Bonnie Anderson and Patti Browning, widow of former Presiding Bishop Edmond Browning.

“We recognize that as the convention considers these resolutions, we must continue the journey of reconciliation with our Jewish sisters and brothers for the centuries of oppressive and anti-Semitic behavior which culminated in our complicity in the Holocaust,” the letter says.  “At the same time, we must not let those horrific injustices blind us to the injustices perpetrated on the Palestinian people.”

The letter goes on to single out the “cruel and illegal Israeli-led siege” of Gaza and says the Episcopal Church will be complicit in the occupation as long as its investments are tied to infrastructure work there.

The issue of divestment generated the most divergent opinions at the hearing, from agreement that the church must end its complicity in an oppressive system to opposition, either from those who side more with Israel or those who worry that divestment might inadvertently cause more harm than good for the Palestinian cause.

The Rev. Jason Poling, vicar of St. Hilda’s Episcopal Church in Maryland, said much of the prevailing rhetoric gives the impression of Israel as a unilaterally vicious occupying power, ignoring Palestinian extremism that has included rocket fire, suicide bombings and kidnappings while serving as a roadblock to progress on peace negotiations.

“Our Israeli friends have a reason to be defensive, because they have a lot to defend against,” Polling told the committee in testifying against Resolution C017.

Alma Bell, a deputy from Maryland, also opposed divestment, because it could lessen the Episcopal Church’s economic leverage in the region and might jeopardize the work of the Anglican Diocese of Jerusalem under Archbishop Suheil Dawani, who is in Austin this week but did not attend the hearing.

Resolution B016 would model the Episcopal Church’s investment policy after one adopted by the Evangelical Lutheran Church of America, which created something called a human rights screen for Israeli and Palestinian investments.

“There are many Lutherans who are thrilled today that our closest communion partner has chosen to take up this same resolution,” said Dale Loepp, a Lutheran who worked on the ELCA measure.

Another resolution, B019, would call for the church to pursue investments that support “a sound economy and a sustainable infrastructure in the West Bank and the Gaza Strip,” but even that measure drew a mix of praise, reservations and opposition, particularly from those who don’t see such investments as doing anything to end the occupation.

And the Rev. Gary Commins, priest-in-charge at Episcopal Church of the Incarnation in Jersey City, New Jersey, cast doubt on whether reconciliation is possible with such an imbalance of power between the Israelis and Palestinians. He urged the committees not to support Resolution B018 for that reason.

“There’s almost nothing in the resolution that hasn’t been said in previous conventions,” Commins testified. “This resolution is just something to make us feel better. … It is an opioid.”

Everyone who wanted to testify was given that opportunity, though committee chairs asked them to keep their remarks to two minutes or less.

People who have followed these issues over multiple General Conventions said the openness was a welcome change, in contrast to what they felt were more strict limitations on discussion.

Another key change is that the House of Deputies was chosen as the house of initial action for all resolutions on Israel and Palestine. At General Convention in 2015, a resolution calling on the church to divest from companies engaged in certain business with Israel failed in a vote of the House of Bishops, which meant it never made it to the House of Deputies for consideration.

“There seems to be a process this time that allows for discussion and debate,” the Very Rev. Will Mebane of St. Paul’s Cathedral in Buffalo, New York, told Episcopal News Service during a short break in the hearing on July 6. “There was a recognition at the highest levels of the church that 2015 didn’t work.”

Mebane said he traveled to the Holy Land several years ago, and the experience affected him deeply. The difference between life on the Israeli side and the Palestinian side is like day and night.

“Not one person in this room would tolerate for one day the conditions that exist in Israel and the occupied territories of Palestine,” Mebane told the committees while speaking in favor of Resolution D041, which is about protecting Jerusalem as the holy city of the three Abrahamic faiths. 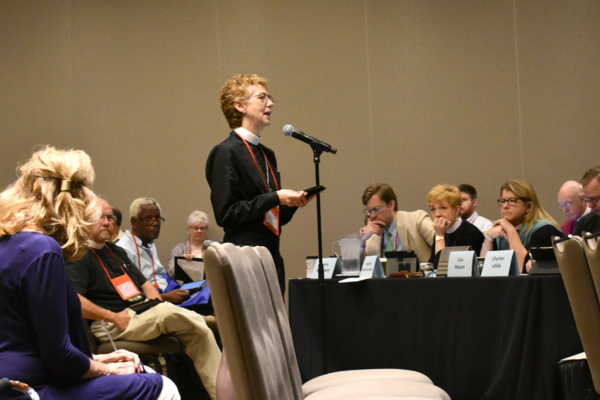 The Rev. Sunny Hallanan, a deputy from the Convocation of Episcopal Churches in Europe, testifies in favor of Resolution D041.

The Rev. Sunny Hallanan, a deputy from the Convocation of Episcopal Churches in Europe, also spoke in favor of D041, saying people in Europe are puzzled by the U.S. policy toward Jerusalem.

“Why are we turning from the values we have stood for?” Hallanan said, her voice wavering for a moment. “We, the church, must take a faithful, prophetic stand.”

Some of the most poignant testimony addressed the plight of Palestinian children, as addressed by Resolution C035 and Resolution C038. Several witnesses told stories of children being taken from their families and detained for long periods of time, often suspected only of throwing rocks.

“I know you share my moral outrage,” Jennifer Bing of the American Friends Service Committee said. “You know that military detention is no way to treat a child.”

Haithem El-Zabri, a Muslim and leader in the Austin’s Interfaith Community for Palestinian Rights, shared a personal story – of his Palestinian parents, who moved to the United States in the 1960s as refugees. Now he longs for the opportunity to visit to his ancestral homeland. But he can’t, due to restrictions imposed by Israel.

“All we are asking for is our right to live in peace and dignity in our homeland in equality with all who inhabit it,” El-Zabri said in voicing support for Resolution D018, recognizing both Israelis’ and Palestinians’ rights to self-determination. 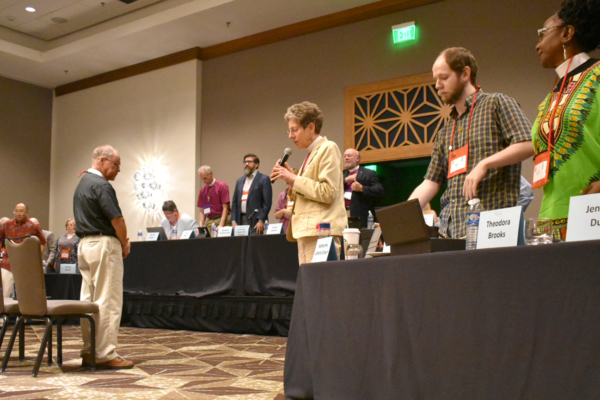 Former Presiding Bishop Katharine Jefferts Schori leads a closing prayer at the end of the hearing on Israel-Palestine resolutions.

When the testimony was over, the committee chairs asked former Presiding Bishop Katharine Jefferts Schori, a member of the international policy committee, to lead a closing prayer.

“Open our ears,” she prayed, “that we may hear the suffering of our brothers and sisters in the land of the holy one, that we may respond with your justice, your compassion, and we pray that we may be willing to enter sacrificially into the lives of all your people.

“May we be people of justice, of shalom, of salam. May we help to repair the breach in our own hearts, in our world, among all your people. In the name of the God of Abraham, we pray. Amen.”