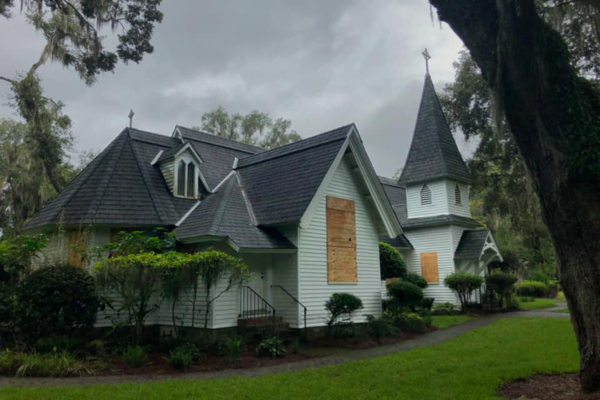 Christ Church on St. Simons Island in Georgia is seen boarded up in preparation for the approach of Hurricane Dorian. Photo: Christ Church, via Facebook

[Episcopal News Service] Episcopal congregations from Florida to the Carolinas braced for the impact of Hurricane Dorian, as evacuation orders took effect in parts of the region and rain from the storm began pelting coastal communities.

The hurricane, which strengthened over the weekend to a powerful Category 5 storm as it devastated the Bahamas, continued to move north in the Atlantic as a weakened but broader Category 2 storm, with maximum sustained winds of 110 mph as of the afternoon of Sept. 3. It may never make landfall in the mainland United States before heading back out to sea, but the rain and storm surge could punish a large swath of the Southeast.

On St. Simons Island in Georgia, church leaders and parishioners at Christ Church Frederica spent their long Labor Day weekend boarding up the church and securing the altar inside as Dorian approached. The Rev. Tom Purdy, the rector, and vestry member Rip Graham took their turns climbing ladders with drills in hand to put up plywood.

On some of the sheets of plywood covering the church’s windows, they scrawled Bible passages. “Be strong and courageous,” from Joshua. “He stilled the storm to a whisper and quieted the waves of the sea,” from Psalm 107. “I would hasten to escape from the stormy wind and tempest,” from Psalm 55.

A mandatory evacuation is in effect for the region of Georgia east of Interstate 95, affecting more than 200,000 residents, according to an NBC News report. More than 800,000 residents are affected by an evacuation order issued for South Carolina’s coastal counties.

The Diocese of East Carolina, which covers a third of North Carolina along the coast, is sharing information on its Hurricane Hub, which was created last year as an emergency resource during Hurricanes Florence and Michael. The Diocese of Upper South Carolina is maintaining its own webpage filled with links and information to help residents prepare for the coming hurricane.

The dioceses in the path of Dorian’s powerful wind and rain have been in contact with Episcopal Relief & Development for guidance in helping their communities respond to the storm and its aftermath. The agency also has reached out to its partners in the Bahamas to assist.

“I am encouraged to see how dioceses in the U.S. and Caribbean have prepared and mobilized ahead of Hurricane Dorian,” Katie Mears, senior director for Episcopal Relief & Development’s U.S. Disaster Program, said in a press release. “While the impact of the storm is not yet known, they are ready to provide support however needed.”

Part of that readiness comes from many years of responding to hurricanes. Storm activity has been particularly intense in recent years, with powerful hurricanes hitting all along the coast and in the Caribbean, including Puerto Rico and Texas.

In the Diocese of Georgia, inland congregations are stepping up to assist as well, welcoming coastal residents who needed to evacuate their homes.

“This includes St. Anne’s Episcopal Church in Tifton, Georgia, that is hosting about 40 health-care workers who evacuated with their elderly patients from a nursing home in a low-lying coastal area,” the Rev. Frank Logue, the diocese’s canon to the ordinary, told Episcopal News Service in an email. “The patients are being housed in a Tifton care facility, and the nursing home employees are staying at the church.”

Southeast Florida Bishop Peter Easton issued a statement over the weekend that noted how the storm’s predicted track had moved away from the Florida coast but would still bring the threat of dangerous flooding to parts of the diocese.

“It continues to be important to take all necessary precautions, to ensure the safety of people and to follow all official advisories and orders,” Eaton said in his Aug. 31 message.

On Sept. 3, Eaton emailed the diocese again with a “Hurricane Appeal,” asking Episcopalians to turn their attention to supporting the people of the Bahamas. He set a goal of raising $50,000 to give to the bishop of the Anglican Diocese of the Bahamas for relief efforts. Winds there reached 180 mph, and at least five people are reported dead and thousands of homes destroyed.

“Our immediate action will allow [the bishop to] direct critical help to individuals and families in the Abacos and Grand Bahama,” Eaton said. “The bishop and his colleagues can reach people at this point in ways that no one or no other agency can, and our response will enable him to reach out with practical and life-saving help.”

Others interested in contributing to Episcopal Relief & Development’s hurricane relief fund can do so online here.