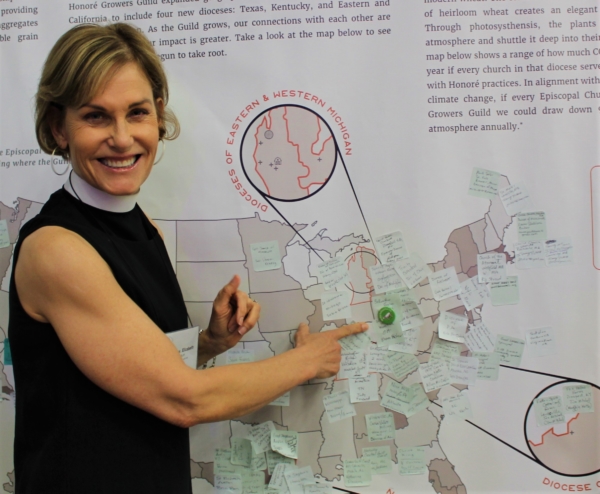 The Rev. Elizabeth DeRuff, president and chair of Honoré Farm and Mill, is recruiting new Growers Guild members to expand the network of farmers, millers, bakers and churches who grow, produce and ultimately benefit from heirloom grains. The flour produced from the grain is stone-ground into flour and used to bake communion breads and wafers. Photo: Sharon Tillman/Episcopal News Service

[Episcopal News Service – Austin, Texas] The reasons why bread baked from ancient grains are so much better for the body, and the Body of Christ, are simply that “these are the same grains that Jesus ate,” said the Rev. Elizabeth DeRuff, an agricultural chaplain with the Episcopal Church and founder of Honoré Farm and Mill. “This bread is lifegiving.”

These are the grains attendees to the 79thGeneral Convention in Austin, Texas, are receiving at Eucharist each day. The honey and whole wheat communion bread is baked fresh daily at Easy Tiger Bake Shop and Beer Garden, a 10-minute walk from the convention center. The wheat was grown on local Texas farms and stone-milled into flour at Barton Springs Mill in Dripping Springs, Texas, about 20 miles west of Austin. 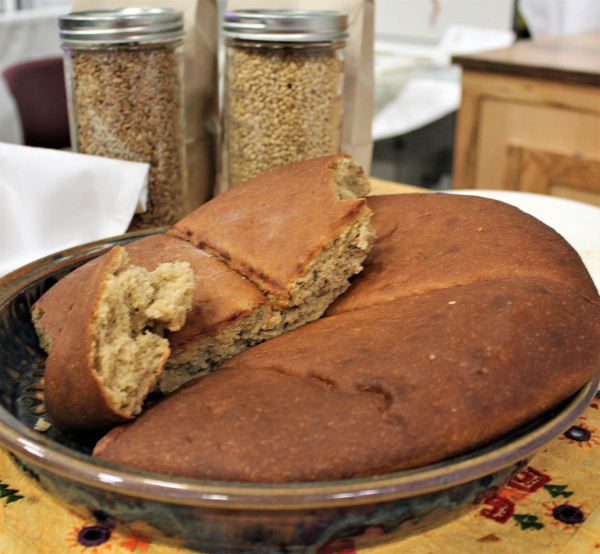 This is the second general convention that has offered Honoré Farm and Mill Growers Guild grain breads.

DeRuff has created a nonprofit, national network called the Growers Guild based in Marin County, California, that she sees as “farming our spiritual values” by “reknitting communities and bringing the church back into a relationship with farmers, millers, and bakers.” The Growers Guild is at the heart of DeRuff’s vision for bringing the ancient grains she and others grow to the communities that Episcopal churches serve.

There is an educational component to DeRuff’s work as well. Honoré Farm and Mill is hosting its inaugural Growers Guild Conference in May 2019. They are inviting “champions” for ancient grains from across the Church to learn how to build their own farming, milling, baking and church community. Each champion will take back what they’ve learned and plant the seeds of the guild in their community.

Children also benefit from DeRuff’s teaching. On Tuesday, July 10, children at convention got a hands-on lesson in heirloom grains and milling at the Honoré booth in the Exhibit Hall. A 750-pound mobile stone mill, custom-built for Honoré Farm, is on the Exhibit Hall floor. It can grind about 50 pounds of flour an hour. The children learned about the growing, milling and baking process; the benefits of ancient grains; and how all of that benefits the earth and environment, according to DeRuff.

Intrigued by heirloom grains, DeRuff started growing ancient varieties in 2011. As an agricultural chaplain, she explores the intersection of food, land and faith, and conducts research, writes, teaches, preaches and consults with congregations around the country. Early on, DeRuff started a program called “Wheat Wednesdays,” an educational program at the Bayside MLK Academy http://www.baysidemlk.org/  in Marin City, California. The after-school program taught the children about farming, sustainability, and nutrition.

Building community is a large part of the Honoré mission. The first community planting was at the Bishop’s Ranch, a 63-acre retreat center owned by the Diocese of California in Sonoma County, in 2014. Volunteers plant, and later harvest the wheat that is used to source the flour. The Honoré Growers Guild has since grown to include farmers, millers, bakers and churches in Texas, Kentucky and Western Michigan. Growing the guild is DeRuff’s mission at convention. Guild members produce the flour and other merchandise Honoré sells to support its mission.

A map on the side of the trailer that makes up half of the Honorébooth space is covered in sticky notes with names of churches, farms, and others interested in becoming part of, or learning more about, the guild, and the products they produce. The plan, DeRuff said, “is to GPS the locations” to help document the growth of the guild.

Churches become a guild members by purchasing flour shares. When a church joins the CSA (Community Supported Agriculture), “freshly stone milled flour will be delivered four times a year directly to your church. Heirloom, stone-milled flour is very digestible so people with gluten sensitivity (but not celiac disease) find they can once again enjoy bread. This flour is like nothing you’ve tasted: it’s slightly sweet, nutty and truly a superior flour to commercial flour,” according to the nonprofit’s website https://honoremill.org/new-csa.

Bread and communion wafers made from these ancient grains offer nutritional and environmental benefits. Because the heirloom, 100-percent whole grain flour is organically grown and stone-milled, it retains the nutritional value of all its parts: the germ, endosperm and bran. Grain milled by stone has a low glycemic index, and contains healthy fats, omega-3 fatty acids, gut-healthy bran microbes, and B vitamins, according to DeRuff. Industrial roller milling strips the grain into its three components, and the resulting white flour consists only of the endosperm, where the starch and gluten are.

The current structure of industrial farming, has “decimated the grain market,” said DeRuff, adding that growers use modern, proprietary seeds owned by large agricultural corporations that strip the soil of nutrients and require the use of pesticides. Ancient grains, however, are open-source seeds that promote “seed sovereignty,” have deeper roots that enrich the soil in which they grow, and require less water to flourish. 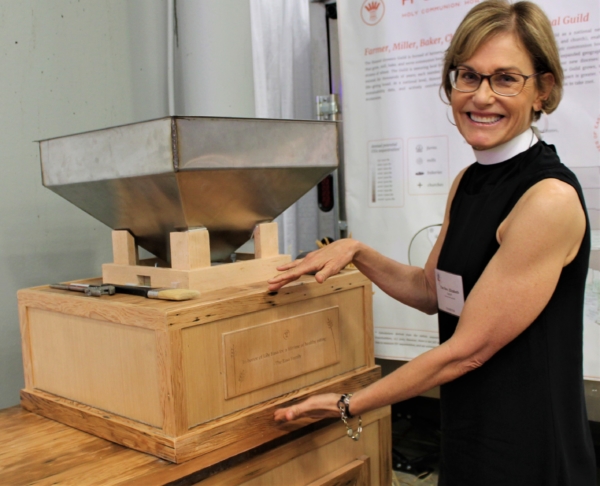 DeRuff has a 750-pound mobile stone mill on the floor of the Exhibit Hall. She is using it to demonstrate the process of turning the ancient grains the Growers Guild farm into flour. Photo: Sharon Tillman/Episcopal News Service

The practice of farming, stone-milling, baking and offering goods made from these ancient grains, including the Sonora and Turkey Red grains used in the General Convention communion bread, nourishes the body, the soul, and the earth by providing a better-for-you food, building community, and sequestering carbon in the soil, enhancing sustainability.

Honoré Farm and Mill is a nonprofit national network of farmers, millers, bakers and churches. It is named for Honoratus of Amiens or St. Honoré, who is the patron saint of boulangers/bread bakers, communion bread bakers, and flour merchants. He lived in seventh century France and was known as a humble and generous man, always pictured with a baker’s peel.

– Sharon Tillman is a freelance writer for Episcopal News Service.