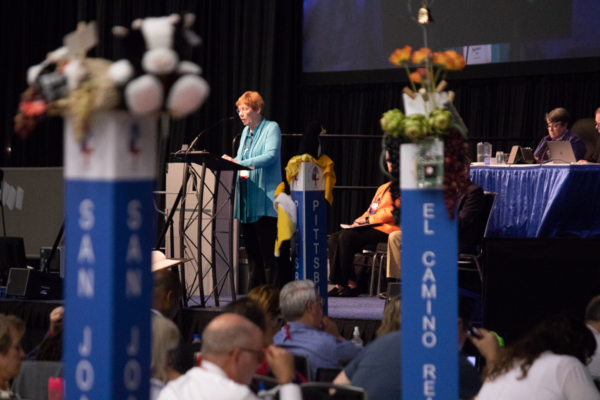 [Episcopal News Service –Austin, Texas] The 79th General Convention is now faced with parsing the potential spending plan for mission and ministry of the Episcopal Church for the next three years.

The Joint Standing Committee on Program, Budget & Finance presented its proposed $133.8 million 2019-2021 budget during a joint session of the House of Bishops and House of Deputies.

The budget’s introduction said the plan reflects the presiding bishop’s priorities of evangelism, racial reconciliation and justice, and creation care. The priorities have been referred to as the “three pillars” of the Episcopal branch of the Jesus Movement.

The budget proposes spending on the church’s three priorities this way: 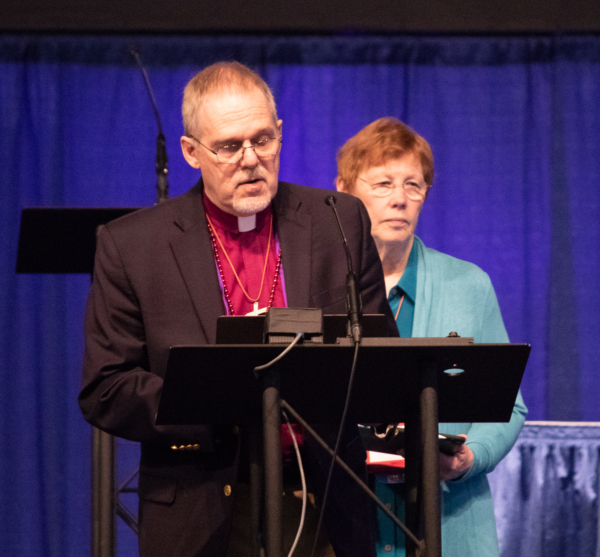 Bishop Steve Lane of Maine and Barbara Miles, deputy from Washington, present the proposed budget during a joint session of the House of Bishops and House of Deputies. Lane is chair of the Joint Standing Committee on Program, Budget and Finance and Miles is the vice chair. Photo: Mike Patterson/Episcopal News Service

“The budget is built upon the foundation of our continuing ministries as a church and our commitments to others both within and beyond our church,” Maine Bishop Steve Lane, vice chair of PB&F, told the joint session. “It is built upon our ongoing commitment to conciliar governance, and the legal, financial and other services of the Church Center [the denominational offices in Manhattan].”

Deputies and bishops have requested 39 task forces, standing commissions or other interim bodies and several new staff positions exceeded available revenue by more than $15 million. “This General Convention clearly has been in a spending mood,” Lane said. “These proposals had the impact of pitting the three pillars against other work considered by some to be important or essential.”

Lane said it was clear to the committee that “our church has not yet lived into the culture of leaner and lower, that is, of reducing the bureaucracy of the church, as we decided in the last triennium in response to the Task Force for Reimagining the Episcopal Church (TREC) report, and in pushing ministry work closer to the ground, closer to the parishes which are the heart of our institutional life.”

He added that “many have grieved the loss of particular churchwide ministry offices and programs and have sought to re-establish them at this convention. PB&F has heard these pleas, and the budget reflects our efforts to respond” while trying to control costs and ground spending around the three pillars.

PB&F had three principles guiding its work in considering those spending requests, according to Lane and Miles. The first was not to expand staff except only where major new work requires it. The second was to favor the creation of networks and time-limited task forces, rather than new canonically required standing commissions. And, third, the committee focused on keeping money in dioceses by preserving the assessment rate at 15 percent “to control total spending so that our commitment to ministry at the local level is maintained and expanded,” Lane said. 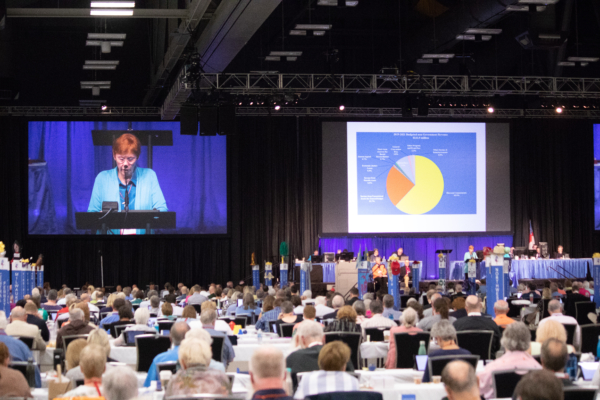 The proposed budget was presented on July 11 to a joint session of the House of Bishops and House of Deputies. Photo: Mike Patterson/Episcopal News Service

The budget’s sources of income

The budget is based on a number of income sources, beginning with diocesan contributions, which will be mandatory for the first time in the church’s history, based on a 2015 General Convention decision. If all 109 dioceses and three regional areas pay the required 15 percent, there would be $88,855,970 available. That amount assumes annual diocesan income growth of a half percent.

Full ENS coverage of the 79th meeting of General Convention is availableÂ here.

Each year’s annual giving in the three-year budget is based on a percentage of each diocese’s income two years earlier. PB&F’s draft budget allows dioceses to exempt $140,000 of income from their assessment calculation. The exemption was $150,000 during the 2012-2015 triennium.

Without getting a waiver, a diocese that does not pay the full assessment will be unable to get grants or loans from the Domestic and Foreign Missionary Society (the name under which the Episcopal Church is incorporated, conducts business and carries out mission).

The dioceses have moved from 40 percent paying at the full rate to more than 80 percent, bringing in $10 million in additional income, Lane said.

He offered “profound thanks to the laity, deacons, priests and bishops of our church.” The 15 percent assessment rate was meant “to make the support requested from the dioceses more affordable and to keep more money in diocesan budgets.” In return, dioceses were asked to work toward full participation.

“This is one of the best things to happen in our financial life in many years, and I hope we can celebrate this expression of our unity and our common commitment to ministry,” Lane said

Additional major amounts of income are anticipated from these sources:

The document also summarizes other major categories of spending:

The version of the budget posted on the convention’s Virtual Binder includes a 41-category summary of spending and income.

Miles noted that while the budget calls for new staff support for evangelism, racial reconciliation and creation care, “these positions have been created by reassigning or expanding the work of existing staff persons” with no increase in the total number of staff members. 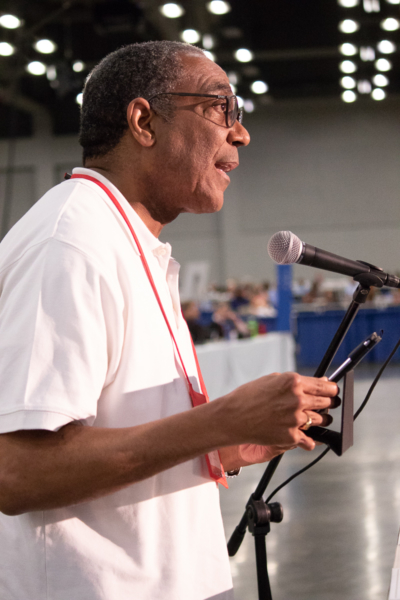 There’s no money in the budget for any form of prayer book revision, which is an as yet-undecided issue at convention. “We did not think it good stewardship to set aside a large sum as an escrow for something we weren’t sure would take place,” Lane said. “And a token amount seemed disrespectful to the task should it be adopted. Therefore, we reserved nothing in the budget for prayer book revision or for staff.”

PB&F left it to Executive Council, the officers of the church, and the Standing Commission on Liturgy and Music “to design a budget and funding process for the work” the convention eventually calls for, according to Lane. The budget does include $201,000 for what it calls “improved translation of current prayer book.”

“We could not predict how the church will ultimately move on prayer book revision,” he said.  “After lengthy conversation, we determined that purring aside a large amount of money for something that wasn’t certain was poor stewardship and putting in a token amount was disrespectful of intended work.”

As required by the convention’s Joint Rules, PB&F’s proposed budget was presented to a joint session of the Houses of Bishops and Deputies. The two houses will debate and vote on it separately. Deputies will do that the morning of July 12 and the bishops are expected to do the same the next morning. Both houses must approve the same version of the budget, which takes effect at the beginning of 2019.

Convention will cast its decision via Resolution A295.

“We believe there is a place for greater public conversation as the budget develops,” Lane added.