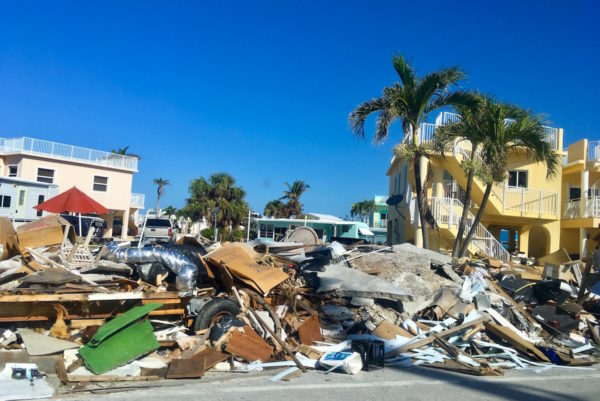 Debris, especially large appliances, remains in some parts of the Florida Keys, which were hit by Hurricane Irma on Sept. 10. Photo: Amy Sowder/Episcopal News Service

[Episcopal News Service —Florida Keys] Four months after Hurricane Irma, refrigerators and washing machines rust along the roadside in the Florida Keys. Much of the debris flanking the main thoroughfare of U.S. 1 is gone, but the stench of decomposing trash is strong in some parts. Bedraggled, bent palm trees border turquoise waters near new palm plantings supported by lumber. Marinas are ghost towns with boat-less docks.

Once the initial crisis was over, both long-term weariness and gratefulness set in for Episcopalians in the Keys, part of the Diocese of Southeast Florida.

Presiding Bishop Michael Curry and his delegation visited island-torn congregations in the Keys Jan. 13 with a goal to solidify unity — with God, fellow parishioners, other congregations in diocese, the Episcopal Church and the mainland. Together, more recovery is possible, Curry said. 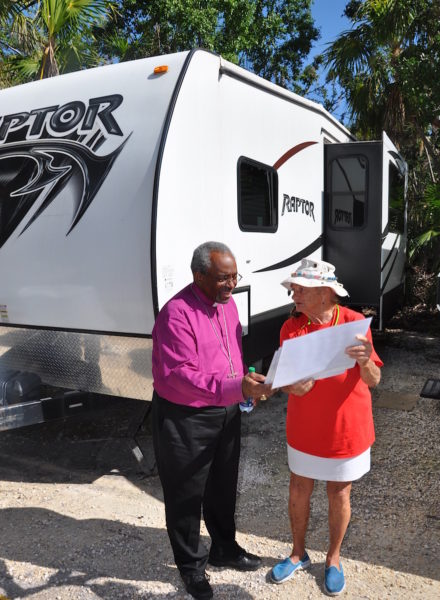 Presiding Bishop Michael Curry listens to and looks at the photos of hurricane damage that Alison “Sonny” Cook shows him. Cook lives in a church-provided trailer sitting behind St. Columba Episcopal Church in Marathon, the halfway point in the Florida Keys. Her home was destroyed. Photo: Amy Sowder/Episcopal News Service

Targeting the middle and lower Keys, Irma dropped 12 inches of rain and its 130-mph winds pushed a 10-foot storm surge ashore as it damaged more than 1,300 boats, many of which were people’s primary homes. While Cudjoe Key is where the storm made landfall, Big Pine Key was one of the other islands hit the hardest.

Throughout the Keys, more than 10,000 homes were damaged or destroyed. And those were primary residences of working class people, not secondary vacation homes, said Southeast Florida Bishop Peter Eaton. Many people were without power for three weeks to a month. 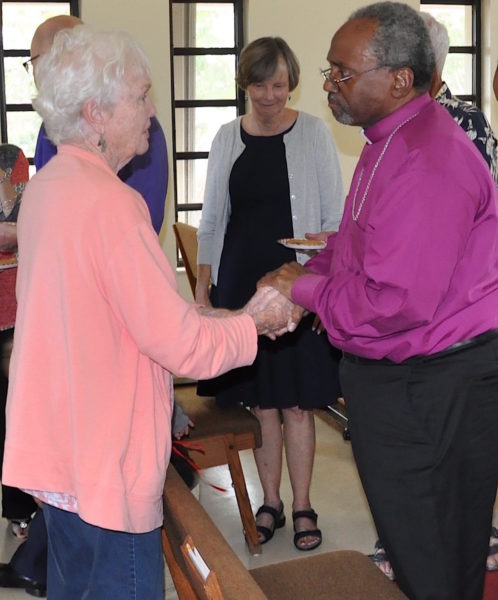 Fishing is the leading industry in the keys, while tourism is second. The lobster and stone crab seasons are a bust, which means an economic hit because the harvest in the Keys supplies restaurants and companies nationwide, Eaton said. Besides the tourist mecca that is Key West at the southernmost tip, most of the islands are rural.

Keys residents are leaving because landlords aren’t repairing their uninhabitable homes, Eaton said. “The chief challenge is keeping people in the Keys, and keeping them working,” he said. Loss of workforce housing exacerbates the problem.

St. James The Fisherman’s Episcopal preschool on the northern key of Islamorada lost two families, took in four families and has a waiting list for enrollment at the school, which has a maximum capacity of 12 students, said administrator Michelle Lane. Across Monroe County, however, Irma made more than 300 children homeless, Lane said.

Lane and county leaders fear that the population of the Keys could drop by as much as 20 percent. Fishing guides and commercial fishers have no work. January and February are peak tourist and snowbird (wintering residents from the north) season, but people aren’t coming down. Many resorts are closed.

“Just for us to stay here, we both have to have two jobs,” said Victoria Kennedy, a 17-year member of St. James. “There aren’t a lot of middle-class people here.”

Once Keys residents were allowed to return to the area, retired registered nurse Shirl McAllister, who lived in Marathon for 30 years, discovered her home gutted by Irma. The doors, windows and walls: All gone. She received a $15,000 estimate just to knock down what’s left. She has to return to work. Still, she didn’t want to leave.

“People say, ‘Why don’t you pack up and go?’ But we’ve been here too long, and we’re old,” McAllister told Curry, as she teared up. She’s living in a FEMA trailer at the moment.

“Despite it all, the volunteers have shown so much love and compassion. It’s just incredible. It’s amazing,” McAllister said. “I’ve donated boxes to this church for years. I never thought it would come back to me. It’s made me a believer; I’ll tell you that.”

Irma tossed St. James The Fisherman’s steeple from its parish hall and preschool onto the parking lot, across the street from a destroyed, empty mobile home park.

“That neighborhood, all their debris, was in our parking lot. But they were flooded,” said church administrator Michelle Lane. 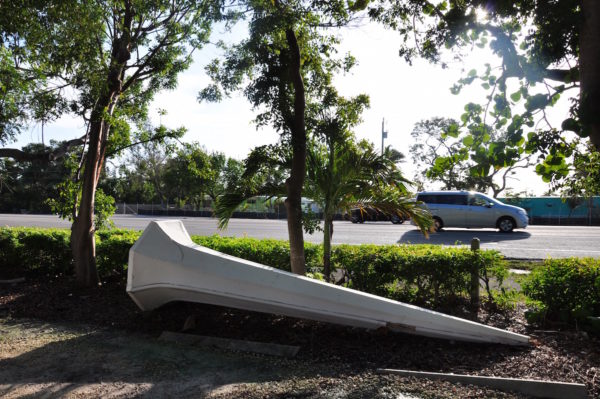 On the northern key of Islamorada, Hurricane Irma tossed St. James The Fisherman’s steeple from its parish hall and preschool onto the parking lot, across the street from a destroyed, empty mobile home park. Photo: Amy Sowder/Episcopal News Service

Curry reminded the congregation that the more turbulent life gets, the deeper people need to reach for God’s help and the wider they need to reach out to others.

“When the rest of the world is spinning like crazy, that will anchor you. God’s got the strength that you don’t have,” he said.

Cling to the spiritual practices of prayer, study of scripture, gathering as a community and receiving communion, he said. “It works,” Curry said.

Transition is something that happens in all our lives, but especially after natural disasters, said Bishop Todd Ousley, of the Episcopal Church Office of Pastoral Development, who accompanied Curry on his visit here and to the Virgin Islands earlier in the week. Practicing self-care can mean not only maintaining your religious practices, but exercise, eating well and sometimes talking to a trained therapist. “When hurricanes come, it not only affects your landscape, it also affects your lives and your community.”

The Rev. Debra Maconaughey of St. Columba Episcopal Church on Marathon, the midpoint of the Keys, procured 19 mobile homes, some with Episcopal Relief & Development’s help.

Lifelong Episcopalian Alison “Sonny” Cook, 88, is living in a church-provided trailer sitting behind St. Columba. Her mobile home about 2 miles east of the church was destroyed. “I just got here at New Year’s. I’d been staying with friends until then,” Cook said as she gave a tour of her new home for now, which she decorated with a parrot tablecloth and on the bed, a teddy bear in a “give thanks” T-shirt. 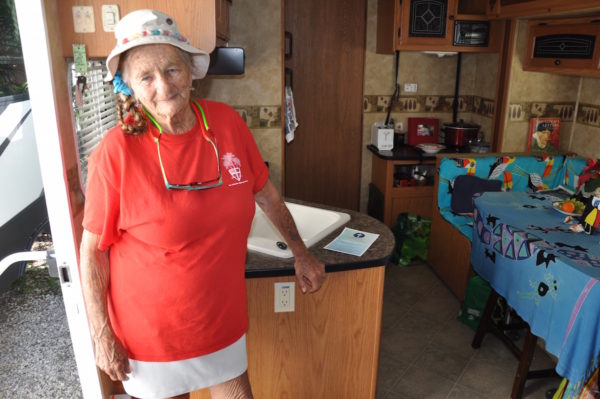 Including the church buildings, Maconaughey houses about 100 people at any given time, with the city’s permission.

“We’ve had Episcopalians from all over the United States helping us,” Maconaughey said. “We have really felt like we are the church.”

Before the storm, Rick Kidwell lived on a sailboat with his two daughters. His family and more than a dozen friends hunkered down at St. Columba. Now, they’re living in a trailer, and he’s helping unload supplies from trucks, clear debris from yards and homes, and yank out moldy drywall as the church’s disaster project coordinator.

Kidwell sees helping others as the same as helping himself. “The Keys are small, so everything is my backyard,” Kidwell said.

St. Francis in the Keys is a tiny church amid a torn landscape on Big Pine Key, one of the islands that took the brunt of Irma. The Rev. Chris Todd and his wife, Julia, are living in one room of their home. Just this past week, a crew removed the appliances and other debris lining the streets in his neighborhood, four months after the storm. “But there’s still a boat on our street. Maybe the claw wasn’t big enough,” the priest said with a laugh. 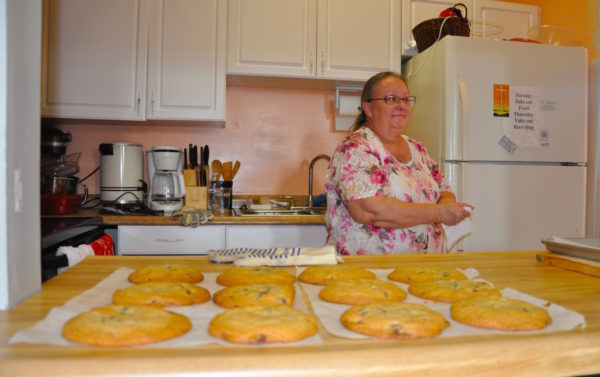 St. Francis parishioner Judee Lyon found gratitude in the midst of the destruction. “I have the best mangoes in the Keys, and our tree is still there.”

At the southernmost tip of the Keys, members of St. Paul’s and St. Peter’s churches on Key West met together to talk to Curry.

St. Paul’s parishioner Sherri Hodies lived on Sugarloaf Key, 1,000 feet from the hurricane’s landfall and had eight tornadoes tear through her home. Yet, she helped coordinate the donation of quilts from an Ohio church, and gave a remaining one to Curry to help someone in Houston, Texas, which suffered from Hurricane Harvey. “I feel blessed, yet fragile,” Hodies said.

Despite the mandatory evacuation order, St. Peter’s parishioner Esther Whyms rode the storm out at home and was amazed at the influx of help afterward. “We had help from people all over,” Whyms told Curry. “I’ve never seen so many people get together.”