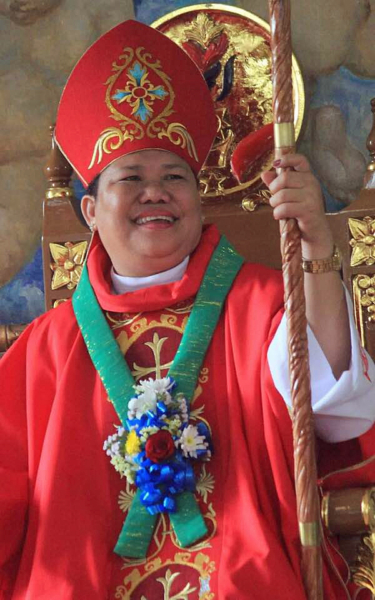 Bishop Emelyn Dacuycuy was consecrated May 5 as the first woman to serve the Philippine Independent Church. Photo: Winfred Vergara/special to Episcopal News Service

[Episcopal News Service] “The church is not about maintaining museums, building aquariums and perpetuating unjust structures but making disciples, fishing for people and building bridges for justice and equality.”

This comment seems to summarize the thoughts of the Rt. Rev. Emelyn Dacuycuy as she became the first woman bishop of the Iglesia Filipina Independiente (IFI). (The IFI and The Episcopal Church have been in a full communion relationship since 1961.)

Her consecration as “bishop in the church of God” was held May 5 at the Cathedral Church of St. Mary in Batac, Ilocos Norte, Philippines, her diocesan see and birthplace of the church co-founder and first obispo maximo, the Most Rev. Gregorio Aglipay.

“Making changes in the church is like giving birth to a child except that it takes a longer time,” Dacuycuy said, referring to her journey to the episcopate. It took eleven special meetings of the General Assembly and three meetings of the Supreme Council of Bishops (SCB) before her election as bishop of Batac Diocese was finally approved.

Following her consecration, the new bishop took leadership over a diocese with an all-male clergy and attended the meeting of the Supreme Council of Bishops where she was the only woman.

“I was seeing this image of a female dragon entering a den of lions, but it turned out to be a very pleasant, amiable and largely enthusiastic reception,” Dacuycuy said of her first council meeting.

Part of this receptivity was the presence of mostly young and newly consecrated bishops who were ready for change and the decisive leadership of the Most Rev. Rhee Timbang, the current obispo maximo who is supportive of Dacuycuy and an advocate for gender equality and inclusion.

“In the past, many bishops were reluctant to elect a woman priest to the episcopate because they fear the possibility that they can become obispo maximo,” Timbang said in an interview. “Ironically, it is this possibility which made Emelyn’s election a reality and the change that the church hopes to see.”

“As obispo maximo who has a limited term of six years, I do not mind a woman bishop becoming obispo maximo someday. For a long time, the church has been hostage to patriarchal values and has restricted the role of women in leadership forgetting the fact that women disciples were the last ones who stayed at the crucifixion of Jesus and the first ones who witnessed his resurrection,” Timbang added.

Dacuycuy’s consecration generated support from the global church. Presiding Bishop Michael B. Curry commissioned Bishop Cathleen Bascom of Kansas and Bishop Nedi Rivera of Southern Ohio to represent the U.S.-based Episcopal Church and to serve as co-consecrators while Bishop Frederik Modeus sent the Rev. Sara Olofsson and the Rev. Fredlund Olofsson to represent the Church of Sweden.

In her sermon, Bascom expressed “unspeakable joy” over Dacuycuy’s consecration and noted that with her consecration of as their first woman bishop, “the IFI has reached another threshold” in its journey of reformation or religious revolution.

Following her first attendance to the SCB, Dacuycuy’s took part in the pontifical solemn mass celebrating the 50th anniversary and rededication of the IFI National Cathedral of Holy Child in Manila.

The IFI Gallery reported that she was “the most photographed among the bishops,” her Facebook photo received thousands of “likes” and the livestreams of the event had thousands of hits.

“I noticed that almost every clergy and lay person have beautiful smiles and were greeting me enthusiastically as if they were very proud of what they’ve accomplished. Like one famous Filipino ice cream, I became an instant ‘flavor of the month,” Dacuycuy remarked in jest.

“The main concern of women is not merely a demand for more positions and equal opportunity in decision-making bodies of the church; it is more than that. It is a struggle to recognize women’s theological and spiritual contribution as an integral part of the church’s prophetic ministry in the world.

“My greatest joy is to serve in a church that welcomes all and gives everyone an opportunity to serve. Gender is just a social construct, a way of ordering society and ascribing values. As a spiritual community, however, we must see beyond gender. We must see God’s people as Jesus sees them — children of God and heirs of God’s eternal reign.”

— The Rev. Winfred Vergara is missioner for Asiamerica Ministries in the Episcopal Church