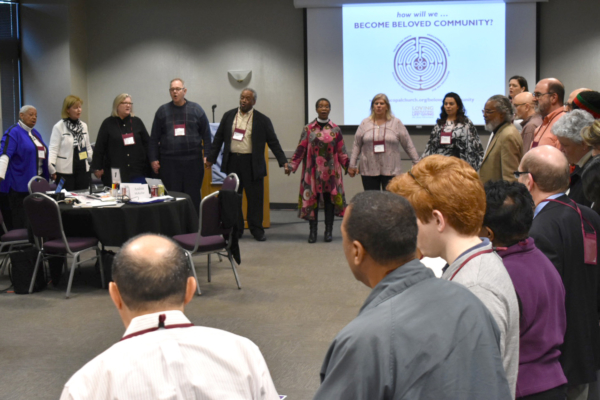 This meeting was light on legislative business, but Executive Council, the church’s governing body during the three years between General Convention meetings, concluded the week by approving a handful of resolutions on financial matters, including the 2019 church budget, the House of Deputies president’s salary and diocesan assessment waivers for six dioceses.

Members of Executive Council also received briefings from church officers and staff members during the week, including a bleak assessment of the future of the church’s refugee resettlement work from the Rev. Charles Robertson, the presiding bishop’s canon for mission beyond the church.

Episcopal Migration Ministries, one of nine agencies with federal contracts to resettle refugees in the United States, expects to learn in the coming weeks if its contract will be renewed, at a time when the Trump administration has dramatically reduced the number of refugees being resettled. The odds are not in Episcopal Migration Ministries’ favor, Robertson told Executive Council’s Ministry Beyond the Episcopal Church Committee.

“If we were going to bet on it, we’d bet we’re not going to make the cut,” Robertson said. He predicted only two of the nine would receive contracts. Though unlikely, he said it is still possible Episcopal Migration Ministries will be one of the two.

Executive Council kicked off its meeting on Oct. 15 at the Oak Creek Hotel & Convention Center, nestled in tranquil lake-side woods in the western suburbs of the Twin Cities. The Episcopal Church put its beliefs into action in July through more than 500 resolutions at General Convention in Austin, Texas, and it is the council’s role to begin aligning church operations with those priorities and mandates.

Much of that work starts with the church budget. General Convention adopted a $133.8 million 2019-2021 budget that reflects the presiding bishop’s priorities of evangelism, racial reconciliation and justice, and creation care. “Council’s job is to take that three-year budget and make it into three one-year budgets,” the Rev. Mally Lloyd of the Diocese of Massachusetts told Executive Council during her Finance Committee report on Oct. 18. 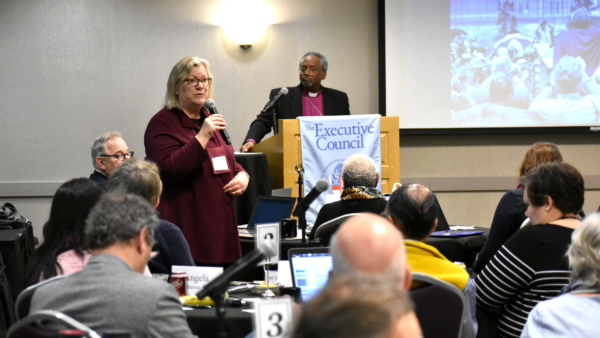 The issue of diocesan assessments generated extended discussion among Executive Council members. Under the current triennial budget, each diocese is expected to contribute 15 percent to churchwide operations, a reduction from past budgets, though some dioceses historically have fallen short of even that lower target.

Dioceses that fail to pay their assessments may be excluded from churchwide grant programs, though they also may apply for waivers allowing them to forego some or all of the required amounts.

“The only criteria for receiving a waiver is financial hardship,” Lloyd said, and she emphasized the process is not intended to be punitive. The committee in charge of following up with dioceses about their assessments emphasizes listening and conversation and welcomes “baby steps” toward full financial participation.

“Arizona has a big burden of past due assessments,” Lloyd said, so the church has agreed to forgive those past obligations over three years if it keeps up with its current payments.

Haiti, in recognition of the country’s poverty, has an agreement with the church outside of the assessment process to pay at least $5,000 a year, with the hope of increasing that to $11,000 by the end of the triennium. Mississippi, which Lloyd says is still dealing with the financial effect of Hurricane Katrina, aims to contribute 13 percent by the end of the triennium. Puerto Rico and Virgin Islands were granted full waivers because they are recovering from last year’s Hurricanes Irma and Maria.

West Texas, however, is a special case that split the voting members of Executive Council. The diocese’s past participation – just six percent last year – has fallen well short of the church’s target, and though the diocese was hit last year by Hurricane Harvey, financial hardship is not a primary factor.

Jennings asked why the church should grant the Diocese of West Texas a waiver if it was able to pay multiple bishops and maintain a sizable endowment fund. Other Executive Council members raised similar concerns and suggested amending the resolution to eliminate the waiver for West Texas.

North Carolina Bishop Suffragan Anne Hodges-Copple spoke in favor of the waiver, saying it was about diplomacy and “strengthening the hand of some good bishops” in West Texas who have been encouraging “recalcitrant” Episcopalians to see themselves part of something larger than what is in their own backyards.

“I love bringing them into the fold more strongly,” Hodges-Copple said.

Executive Council has 40 voting members, including the presiding bishop and House of Deputies president, as well as additional nonvoting members, such as the Episcopal Church’s finance director and chief operating officer.

Twenty of the voting members – four bishops, four priests or deacons and 12 laypeople – are elected by General Convention to six-year terms, with half of those members elected every three years. The other 18 are elected to six-year terms by the Episcopal Church’s nine provinces, with each province sending one ordained member and a lay member.

One of Executive Council’s first actions this week was to reduce its number of committees from five to four. The new committees are Finance, Government & Operations; Ministry Within the Episcopal Church; and Ministry Beyond the Episcopal Church. And one of the final actions of the week was to elect three at-large members to the Executive Committee: Julia Harris of the Diocese of Oklahoma, Rose Sconiers of the Diocese of Western New York and Utah Bishop Scott Hayashi.

As business concluded Oct. 18, Presiding Bishop Michael Curry playfully described the week as “the karaoke meeting of the Executive Council,” a nod to one particularly memorable extracurricular activity from the meeting’s opening night. Breaking the ice was a core feature of this meeting, as Executive Council members found their bearings and got to know each other.

The daily sessions also tackled serious subjects, such the ethical questions raised by the role-playing scenarios that Russell Randle, a senior member from the Diocese of Virginia, included in his training on Oct. 17. That training was followed by a session on racial reconciliation led by the Rev. Stephanie Spellers, the presiding bishop’s canon for evangelism, reconciliation and creation care.

After a presentation by Spellers on the Episcopal Church’s Becoming Beloved Community framework, Executive Council broke into groups to share their experiences and think about how they are called to work for racial healing. The training concluded with all the members joining hands and singing.

During a meeting of the Government & Operations committee, members offered their feedback on the racial reconciliation training.

“At our table, it got a little raw,” Pauline Getz, a member from the Diocese of San Diego, said. “Some of our conversation was hitting some rather deep chords.”

Spellers told the committee that the church has moved away from a past emphasis on “anti-racism” in favor of the language of racial healing, encouraging Episcopalians to interact graciously with each other without demonize people for struggling with their own racism. Such a Christian approach can be applied beyond the work of racial reconciliation.

“If we do this work the way we as a church have said we want to, it will change how we relate to everything,” Spellers said. “This is about us living in the Jesus way.”

Later that afternoon, Robertson gave a sobering outlook on Episcopal Migration Ministries’ future to the committee on Ministry Beyond the Episcopal Church. 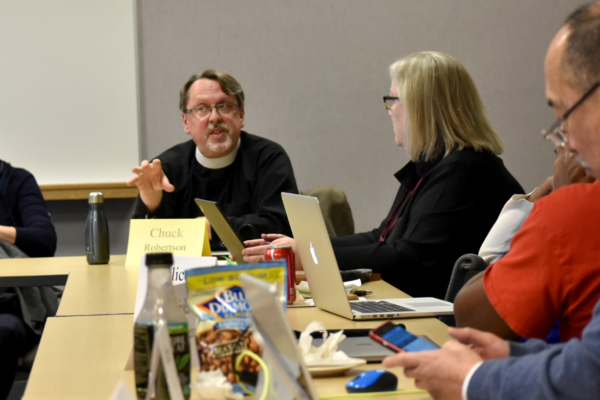 The Rev. Charles Robertson, the presiding bishop’s canon for mission beyond the church, speaks Oct. 17 to the committee on Ministry Beyond the Episcopal Church. Photo: David Paulsen/Episcopal News Service

“We are prepared for the worst,” Robertson said – the worst being the end of Episcopal Migration Ministries contract to continue the resettlement work it has done for the federal government since the 1980s.

The U.S. Department of State announced Sept. 17 that it would lower the ceiling to just 30,000 refugees for the fiscal year that began Oct. 1, down from a ceiling of 85,000 just two years ago. And that 30,000 is just the upper limit, Robertson stressed. The actual number of refugees to be welcomed into the United States likely will be much lower.

Episcopal Migration Ministries once oversaw 31 resettlement affiliates in 26 dioceses, but that number has dwindled to 14 affiliates in 12 dioceses. With even fewer refugees to resettle, the federal government isn’t expected to keep all nine of its contracted agencies, Robertson said, and Episcopal Migration Ministries, though well equipped to do that work, is one of the smaller of the nine.

Even in the worst-case scenario, however, Episcopal Migration Ministries will remain an important part of the Episcopal Church’s outreach efforts. If the resettlement work ends, the agency may find other ways to support refugees and, possibly, other immigrants, Robertson said. He estimated it would take about a year to fully realize that new vision for the agency.

In the meantime, he suggested the Executive Council recognize the exemplary work of the agency’s employees. Council passed a resolution Oct. 18 commending Episcopal Migration Ministries, “whose dedicated staff, during a season of flux and uncertainty, have worked tirelessly and in a sacrificial manner to support refugees in many parts of the world who seek resettlement in the United States.”