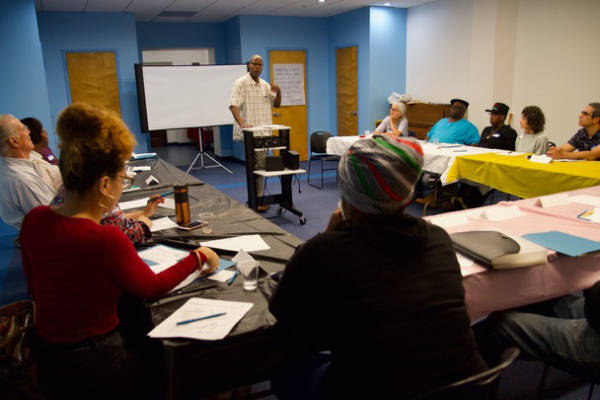 Formerly incarcerated New Yorkers gather Sept. 10 in a room at the Church of the Heavenly Rest in Manhattan for the kickoff meeting of the 10-week Raising My Voice course on public speaking and leadership. Photo: Angela James/angelajamesphotography.com

[Episcopal News Service] The assignment was to talk about something you do well, and Keith Rhames had a recipe for mac and cheese. That may sound like a strange topic for a motivational speech, but Rhames knew himself, knew his audience and already grasped some of the techniques that make brief TED-style talks so engrossing.

Rhames, 52, smiled broadly and made careful eye contact as he shared his story with the 20 or so people who had gathered the evening of Sept. 17 in a parish meeting room at the Episcopal Church of the Heavenly Rest in New York City. What made this mac and cheese special, Rhames said, was the fact that he made it last May.

He had wanted to surprise his mother with a meal. It was Mother’s Day. It also was just three months since his release from prison after serving 30 years for second-degree murder, and he would have settled for any meal that didn’t taste like the soybean-based slop that was his involuntary diet behind bars. But how would he learn to cook mac and cheese?

“Lo and behold, these days they have something called YouTube,” Rhames said, intuitively knowing it would be an effective laugh line. (It was.)

Rhames is one of a dozen formerly incarcerated New Yorkers who have signed up for Raising My Voice, a free 10-week public speaking and leadership course presented by Circles of Support and hosted by Heavenly Rest. The congregation has placed prisoner re-entry ministries at the core of its outreach efforts at a time when the Episcopal Church, too, is turning much of its criminal justice work toward re-entry ministries. 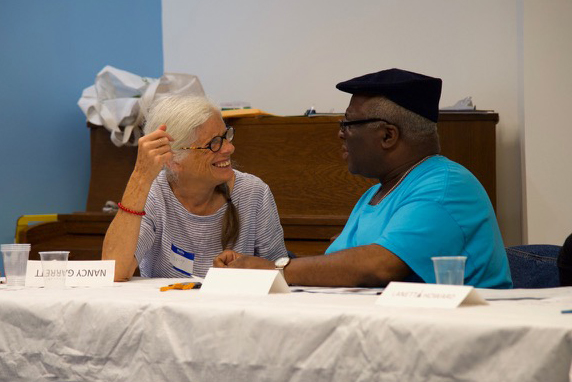 A volunteer coach from Heavenly Rest chats with one of the participants in Raising My Voice during the Sept. 10 session. Photo: Angela James/angelajamesphotography.com

For Raising My Voice, Church of the Heavenly Rest volunteers help provide feedback to budding public speakers like Rhames. Other Episcopal dioceses and congregations are developing their own approaches to helping prisoners re-enter society, such as the Bridge Project in the Diocese of El Camino Real and Bridges Reentry in the Diocese of Arizona, both of which received grants this year through the church’s United Thank Offering, or UTO.

The time is ripe for church engagement. American prisons and jails are holding more than 2 million people behind bars, and most of those inmates someday will be released. More than 4.5 million people are serving probation or parole, living with the threat that one slip-up could return them to the “inside.”

Mark Cohen is optimistic about his future. “I changed my life around a lot since I came out,” the 54-year-old Brooklyn resident told Episcopal News Service. He served a 22-year prison sentence from a drug-dealing case but has been free for three years and is participating in the Raising My Voice classes at Heavenly Rest with the hope that the training will help him find better jobs.

Other participants of Raising My Voice shared similar stories of working to put their lives on a positive track after prison – doing their part to prove that all of us are “more than the worst thing we’ve ever done,” as prominent death row lawyer Bryan Stevenson has written.

The Episcopal Church’s work on criminal justice issues in recent years can be traced to a 2006 resolution passed by General Convention, and subsequent resolutions have expanded the scope of the church’s involvement, including to the problem of mass incarceration.

Such commitments overlap with the Episcopal Church’s elevation of racial reconciliation to a top priority, given that black and Hispanic inmates make up a disproportionately large cross-section of the prison population.

“There is an increasing awareness throughout the Episcopal Church of the oppressive and dehumanizing impact of mass incarceration on black, Latino and indigenous men, women and children,” said the Rev. Charles A. Wynder Jr., a deacon and the Episcopal Church’s staff officer for social justice and engagement. “Transforming criminal justice ministries from traditional prison ministry models to more holistic work of re-entry and policy advocacy is a holistic and integrated approach to more fully living into our Baptismal Covenant.”

In July, the 79th General Convention passed Resolution D004 to endorse specific reforms, such as reduction of mandatory minimum sentences, repeal of laws allowing life sentences for nonviolent offenses, and implementation of measures to reduce discrimination against former offenders. Other resolutions seek to end the death penalty and to eliminate a clause in the U.S. Constitution that makes an exception for inmates in the prohibition of slavery.

The church has been active in supporting congregations and Episcopalians who choose to invest in ministries involving visits to inmates in jails and prisons, taking their cue from the Gospel of Matthew: “I was in prison and you visited me.” Prisoner re-entry ministries are a new churchwide emphasis, and they are gaining momentum.

“Engaging in ministries that involve the accompaniment of men, women and children returning home from prison allows for mutual formation and transformation that may start with pain but doesn’t have to remain there,” Wynder said. “It is fundamentally part of God’s mission of transformation, renewal and justice.”

Heavenly Rest in Manhattan’s affluent Upper East Side neighborhood wanted to do more than simply advocate for reform, preferring to get to know the people who are going through the re-entry process, said Richard Buonomo, one of the co-chairs of the congregation’s prisoner re-entry ministry.

He wasn’t sure parishioners would embrace the effort, but they have. “It just took off,” Buonomo said. “The activities we have created really get the volunteers to experience the transformation right at their fingertips with the people.”

The congregation’s assistance to prisoners re-entering free society falls into three general categories: helping with their first days out of prison, helping them establish a stable family life and helping them find jobs. None of those tasks comes naturally to the parishioners at Heavenly Rest, which is why the first step was establishing connections with community organizations already involved in such work, said the Rev. Anne Marie Witchger, the congregation’s associate rector.

Those partner organizations include the Fortune Society and Network Support Services, both of which provide services to formerly incarcerated individuals. Heavenly Rest also has worked closely with Hudson Link for Higher Education in Prison to provide welcome bags filled with living supplies for inmates as they are released and to host celebrations for former inmates who have graduated from Hudson Link’s degree programs.

Circles of Support is a partnership of several organizations, including the J.C. Flowers Foundation, Heavenly Rest and several other Episcopal churches in New York. The partnership’s mission is expressed in the name, to create circles of support for inmates after their release. 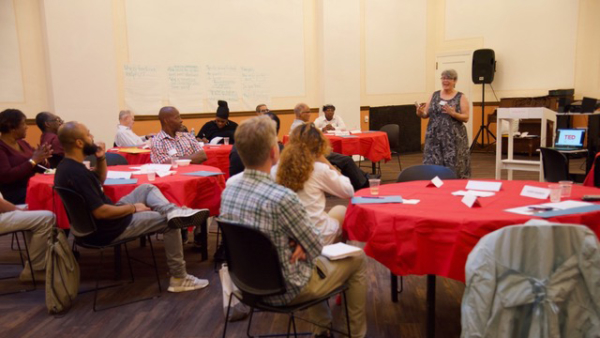 Linda Steele, a staff member with Circles of Support, speaks to the group Sept. 17 during the second session of Raising My Voice at Heavenly Rest. Photo: Angela James/angelajamesphotography.com

“We build them up to succeed,” said Linda Steele, a Circles of Support staff member who leads the Raising My Voice course at Heavenly Rest. She noted her students are paid $30 stipends for the three hours they spend at each weekly session. Heavenly Rest provides a meal, and Steele gives each participant a subway card to make it easier to attend.

Steele, too, is a former inmate, having long since moved past a series of arrests and convictions for drug use and other crimes when she was younger. She has been working for more than a decade in settings like this, assisting others on the post-incarceration path. Learning how to speak in public and share their stories can be an invaluable experience for former inmates, she said.

“They’re able to make sense out of their lives,” Steele said. “People grow, and they walk out stronger than when they walked in.”

On this Monday evening, Steele had taped a large piece of paper to a side wall with a quote from classic Hollywood director John Ford written in marker to inspire her Raising My Voice participants: “You can speak well if your tongue can deliver the message of your heart.”

This is the sixth Raising My Voice class she has led. The group that met at Heavenly Rest was made up mostly of black and Latino men but also a few women. Ages varied widely. Some participants were approaching their senior years. Others were barely into their 20s. Each took turns delivering two-minute speeches and receiving feedback.

A 22-year-old woman told the group of the day last year when she suddenly realized she had a future beyond her former life behind bars. A tall, graying man shared his love of “Concierto de Aranjuez” from Miles Davis’ “Sketches of Spain.”

The feedback the participants offered was nearly all supportive, whether expressing connection with the speaker’s message or noting the speaker’s physical poise or vocal clarity. Steele added some positive feedback of her own, as well as tips for improvement.

Some members of Heavenly Rest have been trained to provide feedback as well. With the exception of Buonomo, though, they remained mostly silent during this session, just the second of this latest series. Steele later said she expects more from the church volunteers as they become comfortable with the format.

Reginald Paige drew praise for his unique response to the question of the evening: “I find myself good at being me,” he said to open his presentation. “Most of my life, I did my very best to be anyone but me.”

Paige confided in the group that he had been arrested 76 times and jailed eight times. Now at age 48, he was proud to say, “my past didn’t take my future.” 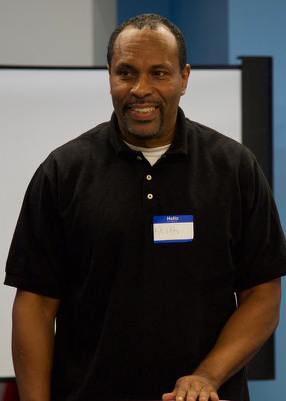 Keith Rhames, who was released from prison in February after serving 30 years of a sentence for second-degree murder, speaks at the kickoff meeting of Raising My Voice on Sept. 10 at Heavenly Rest. Photo: Angela James/angelajamesphotography.com

When the evening’s session was over, Paige explained to ENS his troubles early in life were primarily tied to drugs. He was last released from prison in 2007 and has been drug-free for two years. He works as a certified recovery peer advocate, helping other recovering addicts keep their lives on the right path.

“I went from a dope dealer to a hope dealer,” he said.

Rhames’ face showed no sign that 30 years in prison had left a mark on him as he talked cheerfully after the class. But he admitted he sees his life as a cautionary tale, and learning public speaking skills may allow him to share his story in a way that will inspire young people not to follow the same dark path.

“My main thing is to try to avoid anybody else going through what I went through,” he said.