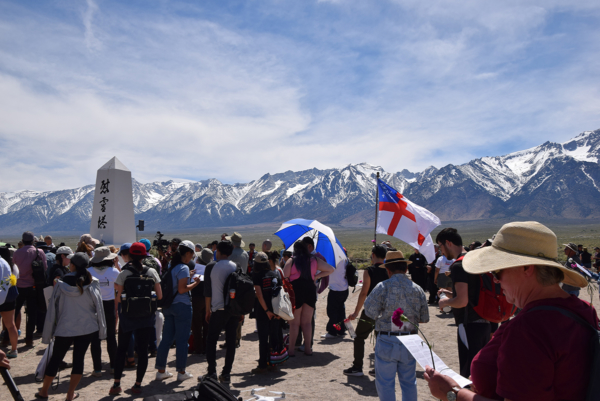 Episcopalians joined worshippers at an April 27 interfaith service, commemorating the 50th anniversary of the first pilgrimage to Manzanar internment camp, one of 10 where 120,000 Japanese Americans were held during World War II. Photo: Ben Soriano

[Episcopal News Service – Lone Pine, California] Episcopalians from the Diocese of Los Angeles were among thousands who journeyed April 27 to Manzanar National Historic Site, one of the 10 internment camps where nearly 120,000 Japanese Americans were held during World War II, an injustice that speakers said must “never happen again”.

In blistering desert heat and in the shadow of the snow-capped Sierra Nevada mountains, the Kyodo Taiko drummers from the University of California Los Angeles opened the festivities, to commemorate the 50th anniversary of the first pilgrimage to the former war relocation center in 1969. The day’s events also included stops at the visitor’s center, the museum and a recreation of the rustic wooden barracks that had housed four families each.

During an interfaith service, Buddhist, Christian, Muslim and Shinto worshippers laid flowers at the iconic Manzanar cemetery monument, where some detainees are buried.

A crowd estimated at about 2,000 listened to speakers who included representatives of the Lone Pine Paiute-Shoshone Reservation and the National Park Service, local activists, politicians, community organizers and Tomochika Uyama, the Japanese consul general in San Francisco.

Nihad Awad, co-founder of the Council on American-Islamic Relations, or CAIR, thanked the Japanese American community for its support in difficult times and told the gathering that the injustices leveled against Japanese Americans must never be permitted to happen again.

After teaching his children about the mass incarcerations of Japanese Americans during the war, they feared the same fate amid growing anti-Muslim sentiment in the wake of the Sept. 11, 2001, terror attacks, Awad said – so much so that his 10-year-old daughter “packed a suitcase and was ready to be picked up by the federal government.”

“CAIR and a lot of civil rights organizations are working hard each day to ensure that this will never happen to her or any children in America,” he said to cheers and applause. 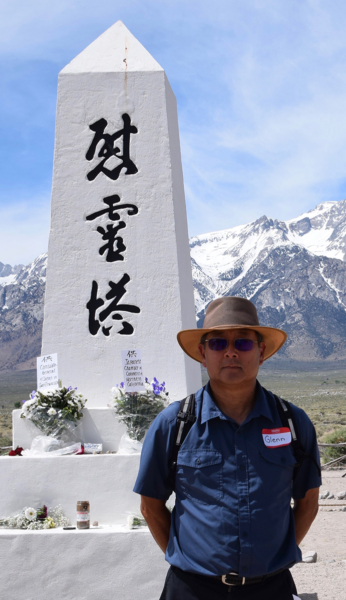 Glenn Nishibayashi, in front of the iconic monument marking the cemetery at the former relocation center: Photo: Kathy Nishibayashi

Awad’s story felt very personal for Glenn Nishibayashi, a member of St. Mary’s Episcopal Church, a historically Japanese American congregation in Los Angeles. His mother, Frances Kako, was 16 when she and her family were sent to the camp in Heart Mountain, Wyoming.

Kako’s family ran a business that traded goods between the U.S. and Japan, but after the Dec. 7, 1941, attack by the Japanese on Pearl Harbor, “they had to shut down the business; they lost everything,” Nishibayashi told Episcopal News Service.

Nishibayashi, 62, a retired financial planner, was among several dozen Episcopalians from the Los Angeles diocese who made the 220-mile bus trip to the camp to commemorate the anniversary.

“To think, how far we still have to go,” he said. “I realized that we are not much better than we were 75 years ago. It feels like we’re heading backwards these days. It reminds me that we have to be vigilant about fighting racism and xenophobia. While it was in the past, it’s also in the present.”

Nishibayashi and other children of camp survivors say their parents rarely, if ever, discussed those experiences. “It was a dark time for them, and they really didn’t want to share about it.

“Essentially, they were in prison when they had done nothing wrong,” he said. “It wasn’t something they could do anything about. It was a shameful experience for them, even though it wasn’t their fault.”

His son Kendall’s search for answers led them to Heart Mountain and the discovery of photos of Nishibayashi’s grandfather and his mother’s speech as valedictorian of the first high school graduating class at the camp. Published in the Heart Mountain Sentinel at the time, she told some 240 classmates, “we face the future with faith in the U.S.”

Although forced to leave behind all they held dear, Kako called it “a tribute to American democracy … that we have been able to pick up so quickly the strings that we dropped, and that we, as a body, are privileged today to take part in this graduation ceremony.

“We, as the graduating class have two choices before us today,” Kako wrote. “We can remain passive and live in the memory of the things we loved and knew back on the Pacific Coast. Or else we can stand strong and erect and look straight into the future.”

She charged the group to “look forward with a faith in democracy that is shining and strong, for we know that the real America has a big and understanding heart.”

Still, Nishibayashi said, his mother struggled with depression most of her adult life, he believes, because of her camp experiences.

His father, Masaru Nishibayashi, was 18 when his family was sent to the camp in Jerome, Arkansas, Nishibayashi said. “They dressed in their Sunday best,” he said. “They did not resist. My father told me that ‘we were silent. No one spoke out or spoke up for us. We knew we were alone.’”His father’s family members also lost their business, which included renting Asian artifacts and props to Hollywood film studios.

Masuru Nishibayashi served as a translator for U.S. Army military intelligence under Gen. Douglas McArthur, he said. Although detained, he was granted a special pass to come and go from the camp, a card which Nishibayashi still possesses. After the war, his father earned a doctorate in chemistry and became a research chemist.

St. Mary’s, where his parents met and married, still bears witness to the past.

A stained-glass window depicts the shields of the dioceses where the 10 internment camps were located. At the top of the window is the Episcopal Church shield; they are connected by a depiction of barbed wire.

Near the baptismal font is a plaque, listing names of those who served in World War II, including members of the famed 442nd unit. Considered to be the most decorated unit in U.S. military history, its members were made up almost entirely of second-generation Japanese Americans, who fought while many of their family members were in camps.

“My father’s name is on that plaque, and I show it to people when they come to St. Mary’s,” Nishibayashi said. Also posted in the church are copies of Executive Order 9066, signed in 1942 by President Franklin D. Roosevelt authorizing creation of the camps, and of a “reparations letter” that decades later accompanied $20,000 to survivors.

Nishibayashi laughed. “It’s part of the family lore that my grandmother died on the day (President) Reagan signed that act. We call it her last act of defiance, as if she were saying, ‘I’m going to live long enough so you have to say sorry to me.’” 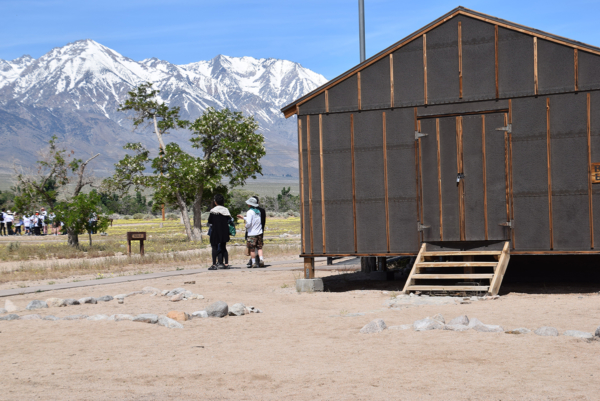 A recreation of wooden barracks depicts the rustic conditions under which detainees lived, with no heat or running water.

Sharon Matsushige Crandall, 53, also was on the bus trip. For her, the act of standing on this earth where Japanese Americans once were held reduced the sting of past shame connected with their detention and helped alleviate present challenges of feeling caught between cultures.

Crandall also noted the sea of Americans of Asian, African, Latino and European descent, of all ages and genders, who attended the commemoration. “It felt so good to see such a diverse group of people there,” she said. “Years ago, the only people that would even care about something like that were other Japanese people.”

“It was very emotional for me,” she told ENS. “It was almost like the minute I stepped off that bus, I could just feel it, a sense of being understood in that space, with all those people. It was very powerful to me.”

Although her parents shared details of their camp experience with her, she has no tangible record of their early lives, she said. “Sometimes, people post pictures on Facebook of their parents when they were kids, and it makes me so sad,” she told ENS.

The community was Brawley, a rural farming area inland from San Diego. Her farmer grandparents were poor, with seven children and few resources. The family plunged into survival mode when her grandfather was arrested, days after Pearl Harbor, suspected of being a spy because he had a short-wave radio. Soon after, the family was sent to the camp in Poston, Arizona.

“My mom was 9 years old when they went to the camp,” Crandall said. “When my grandfather was arrested, he told my grandmother that, as long as you stay in the United States, I’ll find you. But if she went back to Japan, he wasn’t going to look for her.”

When the war ended and families were released, her grandmother had nowhere to go. They stayed in the camp, eventually returning to Los Angeles, Crandall said.

In spite of the challenging times, the family still found a way to focus on joy, an important part of the story, she said. “They arrived to a brown desert, and when they left, they left a green oasis. That’s the Japanese way, to make it better than when you arrived. They planted gardens and tried to make it a home.”

Yet, ever afterward, “my mother lived lean, very lean,” Crandall recalled. “She was absolutely someone who didn’t cling to things, to memorabilia and things like that. Whenever I would complain as a teenager, she’d say, ‘Imagine if you were told to pack a bag and take only what you could carry out the door? What would you carry?”

The shame associated with the camp experience prompted her parents to raise her and her siblings “as fully American,” but they felt caught between cultures, Crandall said.

“I think that part of this intergenerational trauma is this face of, who am I and where do I belong? I’m not fully American because of the way I look. But my parents raised us to be fully American. Part of that was being Christian and eating a certain type of food and not speaking my native language,” she said.

“I think they were worried that we would be identified as not American and not loyal, and people don’t understand that today, and I think sometimes people shame me for that.”

The trip to Manzanar, part of a Transformational Journeys pilgrimage offered by All Saints Episcopal Church in Pasadena, released some of that shame, she said. “I felt when we were at Manzanar the shame that I think that my family and all the internees must have felt, and the importance of naming it so we don’t pass it on.”