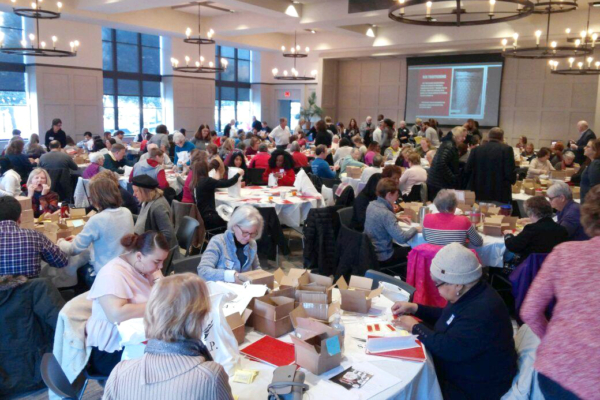 About 200 participants at the SOAP UP event Jan. 26 at All Saints’ Episcopal Church in Atlanta apply labels to bars of soap with messages aiming to fight sex trafficking. Photo: Catherine Renaud

[Episcopal News Service] Advocates for victims of child sex trafficking warn that the problem spikes around big sporting events, like the Super Bowl, which is taking place this weekend in Atlanta. That warning sparked a call to action among Episcopalians in the Diocese of Atlanta, who have turned thousands of bars of soap into weapons in the fight against exploitation and abuse.

The campaign, dubbed SOAP UP Atlanta, was organized by members of the diocese’s Domestic Minor Sex Trafficking Commission and builds on the work of a range of organizations in metro Atlanta with the shared goal of ending human trafficking.

“It’s going to take people, parishes, churches, other organizations banding together to get this done, and if we do, massive amounts of people can stop it,” said Catherine Renaud, a commission member who helped organize the SOAP UP events. The bars of soap were wrapped with anti-trafficking hotline numbers and given to hotels around Atlanta, along with informational materials and posters with the pictures of missing children.

Attention to this issue during the lead-up to the Super Bowl on Feb. 3 already appears to be producing results. At least four victims were rescued and 33 people arrested this week through a law enforcement crackdown, according to an Atlanta Journal-Constitution report.

It wasn’t clear if any of those victims were saved because of SOAP UP, but Renaud said she later learned that, at some hotels, employees told campaign volunteers they recognized potential victims from the handout posters and reported that information to authorities.

The diocese’s Domestic Minor Sex Trafficking Commission has been around for several years but has never attempted a campaign like this before, said Renaud, who has been on the commission for about two years.

Renaud is 76 and semi-retired after running a computer software business. She is a member of St. Patrick’s Episcopal Church in Dunwoody, an Atlanta suburb, and got involved in the fight against child trafficking after learning about the problem years ago at a conference.

“I heard the statistics. That’s all it took for me,” she said. Among the statistics cited by the diocese’s commission are that, in Georgia each month, an estimated 7,000 or more men who pay for sex end up exploiting an adolescent female.

“I could not sit by and do nothing,” Renaud said. “And I think the more other people hear about it, they won’t be able to either. Once you hear it, you can’t forget it.”

The Episcopal Church, too, has taken up the issue. A 2009 General Convention resolution “calls for the protection of all victims of human trafficking,” and Episcopalians have been involved in past campaigns to fight sex trafficking in Super Bowl cities.

In July, General Convention passed a resolution emphasizing the role businesses can play in identifying and reporting exploitation by adhering to what is known as the Code of Conduct for the Protection of Children from Sexual Exploitation in Travel and Tourism. 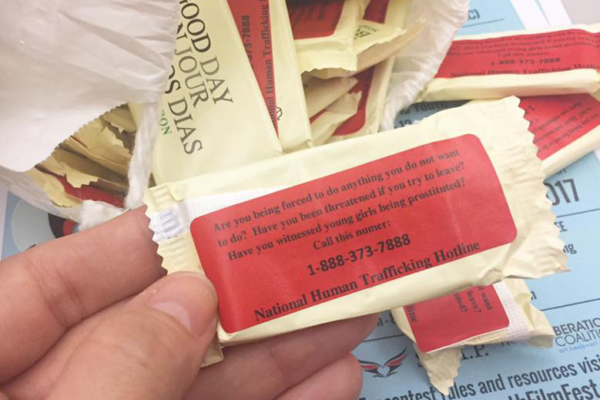 Bars of soap like these are labeled with trafficking hotlines and distributed to hotels where victims may see them and get help. Photo: S.O.A.P., via Facebook

Outreach to businesses is a primary goal of the Ohio-based organization S.O.A.P. that was founded by trafficking survivor Theresa Flores. S.O.A.P. mobilizes volunteers to wrap bars of soap and containers of makeup wipes with labels advertising human trafficking hotlines and distributing them to hotels where victims might see them. Super Bowl cities have been a top target of Flores’ team since 2011 when it was held in Dallas.

As the Diocese of Atlanta’s anti-trafficking commission began discussing its own plans for this Super Bowl, it reached out to Flores to partner with the local campaign. On Jan. 26, the diocese held a daylong workshop for a capacity crowd of 200 at All Saints’ Episcopal Church in Atlanta, where Flores shared her story and alarming statistics about the problem of child sex trafficking. Commission members also worked with Ahavath Achim Synagogue to host a second SOAP UP workshop there the following day.

Each afternoon, workshop participants divided into teams of four and ventured out to hotels around the city, asking hotel managers to stock the bars of soap wrapped with hotline labels. The hotels were “unbelievably receptive,” Renaud said.

The Rev. Monica Mainwaring, vicar of Church of the Common Ground in Atlanta, is a member of the diocesan commission who volunteered at the Jan. 26 event. SOAP UP was “in every way a success,” she said.

“It’s not like you can battle trafficking in an instant,” Mainwaring said. She compared it to the problem of homelessness, which can’t be simply swept under the rug when the Super Bowl comes to town. Her worshipping community celebrates Eucharist every week at a city park, convenient for people experiencing homelessness.

She sees the SOAP UP campaign as one part of a long-term community-wide effort to end human trafficking in the city. “I’m really proud of the city [organizations] working on that and very publicly saying we’re going to fight this.”