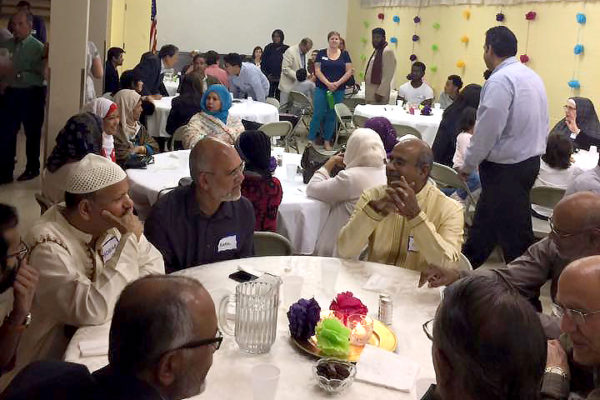 Muslims join Episcopalians in June 2017 for an iftar meal hosted by St. James Episcopal Church in Columbus, Ohio. The church’s 15th annual iftar will be May 31. Photo: St. James, via Facebook

[Episcopal News Service] The Muslim holy month of Ramadan started this week, and Episcopal congregations across the country have been encouraged to participate in an interfaith outpouring of support, including by hosting or joining the dinners at which Muslims break their daily fast.

The meals, called iftars, are served every evening after sundown during Ramadan, which started this year on May 16. Iftars often are festive community gatherings, sometimes held in homes, sometimes in mosques – and sometimes in Christian churches, an effort to bridge divides across faith traditions.

St. James Episcopal Church in Columbus, Ohio, is preparing to host its 15th annual iftar, and the meals have become so popular that the church has to take reservations and cap attendance at 150. Lead organizer Janet Bailey called the meal the church’s gift to its Muslim neighbors, “to let them know that we care and that we’re not afraid and that this is a safe environment for them.”

Similar iftars have been hosted in the past at Episcopal churches nationwide, such as in Miami and Houston. This year, St. John’s Episcopal Church in Cold Spring Harbor, New York, on Long Island is gathering a group of parishioners to attend a community iftar hosted by a local Muslim organization. Teens specifically have been invited, part of a broader interfaith response to an incident last year involving hate speech at a local high school.

“Very few of our parishioners or our teens have ever been to a mosque or an Islamic center,” the Rev. Gideon L.K. Pollach, rector at St. John’s, told Episcopal News service. “This is part of a larger effort in our region to work together on issues of common cause.”

Ramadan is considered the holiest month of the year for Muslims, who abstain from food and drink during daytime hours as they heighten their focus on spiritual rejuvenation. The iftar, which means “breaking the fast,” commences at sunset.

“Inviting guests to break the fast or going to someone’s house for iftar is very common in Ramadan,” the Islamic Networks Group, or ING, says on its website.  “Many mosques also host open houses for their friends and neighbors of other faiths to join them for their fast-breaking dinner or iftar at the end of the fasting day.”

ING, an organization whose mission is to build interfaith alliances and dispel stereotypes about Muslims, is one of the supporting partners, along with the Episcopal Church, behind a campaign during Ramadan to connect people of different faiths around the iftar. The campaign, The United States of Love Over Hate, is led by the ecumenical organization Shoulder to Shoulder, of which the Episcopal Church is a member.

“The primary goal of this effort is to identify, support and connect people to iftars open to interfaith guests across the United States, in order to help facilitate local relationship building among Muslim and non-Muslim communities,” Shoulder to Shoulder says on its website. “Additionally, houses of worship are invited to display ‘Love – Your Neighbors’ signs outside their buildings during the month of Ramadan, to show their commitment to standing with and getting to know their neighbors.”

That mission has been taken up by the Episcopal Church’s Office of Ecumenical and Interreligous Relations and is being carried out by congregations like St. James in Ohio and St. John’s in New York.

The iftar at St. James was started in response to episodes of Islamaphobia after the Sept. 11, 2001, terror attacks, Bailey said. Part of the goal was to educate St. James parishioners about the Muslim faith, though the congregation also wanted to promote a spirit of welcome.

“It’s probably more to let them know here are Christians that are welcoming them to basically our church home and to show that we are no different than them, as far as our likes, our goals in life and wanting to live peacefully,” Bailey said.

The church’s first iftar drew a few dozen guests, and it has grown steadily each year. Most of those attending are Muslim, though the iftars also draw members of St. James and two other Episcopal churches in the area.

On May 31 at sundown, around 9 p.m., guests will gather in the downstairs of the St. James parish hall to break the fast with dates and water. They then will go upstairs, where an imam will lead the group in prayers on rugs laid out for them. After the prayers, all with gather again downstairs for a potluck meal that has been prepared following Muslim halal guidelines.

Pollach, the St. John’s rector, has never been to an iftar, though he worked as a seminarian in the Office of Ecumenical and Interreligious Relations under Presiding Bishop Frank Griswold.

“In general, learning more about people of different faiths and cultures adds context and depth to our understanding of our own culture,” he said.

Christians, Muslims and Jews in his community on Long Island have been working together in recent years to tackle shared challenges, most notably the opioid epidemic. Their work gained an added sense of urgency in August when swastikas and hate speech were found spray-painted on walls at Syosset High School. Five students were arrested in connection with the graffiti.

Teens and worshipers of all faiths are invited to the iftar on May 22 at the Islamic Center of Long Island in Westbury, and Pollach plans to bring a group of eight to 10 members of his church.

“I’m just looking forward to it,” he said. “The ecumenical community has been working really hard to develop a greater depth of understanding across the communities … to try and build relationships, not just around religious things but also around social and cultural issues.”