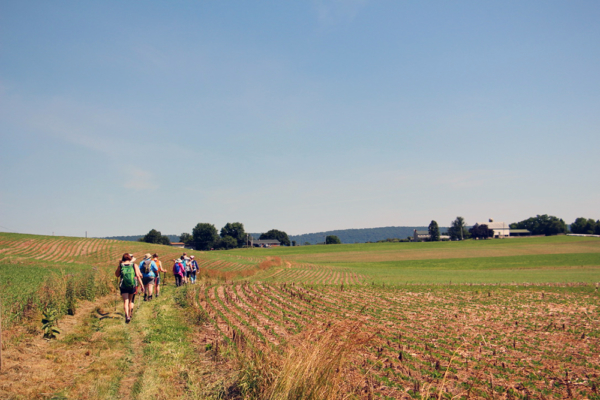 Pilgrims walk through a field on June 26, 2019, on Day 4 of the Appalachian Camino, a weeklong pilgrimage organized by the Episcopal Diocese of Central Pennsylvania on parts of the Appalachian Trail passing through the diocese. Photo: Emily McFarlan Miller/Religion News Service

[Religion News Service — On the Appalachian Trail, Pennsylvania] The pilgrims had come to a fork in the road.

They had just finished a hard uphill climb on the Appalachian Trail, and they weren’t sure they wanted to head 200 yards in the opposite direction to stop at the Darlington Shelter — even if it was named after the Episcopal bishop who contributed to the development of the trail.

But when they arrived, they found a bit of the “trail magic” that the Appalachian Trail is known for awaiting them.

Several of the support team members following their pilgrimage along the legendary 2,190-mile footpath had parked their van nearby and hiked a short way to the shelter carrying cold water and Gatorade.

“They were, like, magical. They just appeared,” said Debbie Pflager, 67, recounting the high point of the day’s hike during a time of reflection that evening.

The group was part of last month’s weeklong “Appalachian Camino,” inspired by the 500-mile pilgrimage across northern Spain. Organized by the Episcopal Diocese of Central Pennsylvania, it took the pilgrims along parts of the Appalachian Trail that pass through the diocese.

About 20 pilgrims, most from parishes within the diocese, hiked the full week, staying overnight in churches and parish halls along the way. Another 24 joined as day hikers throughout the week.

“We live in such a beautiful place here in Pennsylvania, and the Appalachian Trail is such a gorgeous walk,” Central Pennsylvania Bishop Audrey Scanlan said. “So this is an opportunity to come together in community, in nature and appreciate God’s creation.”

The idea for the Appalachian Camino came from the Rev. Dan Morrow, the diocese’s canon for congregational life and mission.

Morrow is no stranger to pilgrimages.

He has traveled to Ireland and to the home of St. Francis of Assisi in Italy, he said.

And he has always wanted to walk the Camino de Santiago, which ends at what many Catholics believe to be the resting place of St. James. The walk has exploded in popularity with American pilgrims in the past decade.

Morrow said he has never had the time to make the trek, but on a recent day hike on the Appalachian Trail with his wife, it occurred to him that the diocese could bring the Camino to Pennsylvania.

“We should do a pilgrimage here along the trail, visiting our sacred spaces with our own group of pilgrims,” he said.

It wouldn’t end at the final resting place of an apostle, he said, but “having done other pilgrimages … I just know that the journey is just every bit as important, as transformative, as the destination.”

When Morrow approached the bishop with the idea for an Appalachian Camino, she immediately said yes.

It fit perfectly with the “Bishop Out of the Box” program Scanlan started last fall. The program is meant to model “how we could engage ministry in different ways and kind of invite people to think creatively, obviously out of the box, to do things differently,” she said.

So far, that has taken the bishop to a county fair wearing a button reading “Need prayer?” and to a Martin Luther King Jr. Day celebration with a color-by-number picture of King on canvas, among other things.

“This is our own opportunity to embody our faith, to say that we’re on a journey and literally, not just figuratively or metaphorically, but literally to journey with others on the way,” she said.

Building on the “way of love” espoused by the Presiding Bishop Michael Curry, they referred to the pilgrimage as “walking the way of love in central Pennsylvania,” Scanlan said.

By June 25, the fourth day of the Appalachian Camino, some of the pilgrims and their support crew had earned “trail names” like “Go Go Gadget,” “Major Tom” and “Mama Bear.” The bishop was “Trinity on the Trail” and Morrow, “Venom Sucker,” which came with a story recounted with much laughter about how — since the hike had been his idea — he was responsible for rescuing anybody bitten by a snake along the way.

They gathered early in the morning for a brief liturgy, including a prayer of blessing for the pilgrims. Scanlan knelt at the feet of those joining them for the first time that day, making the sign of the cross over their boots, and they split into two groups — the faster hikers charging ahead first with the bishop.

Morrow set his timer for 10 minutes of contemplative silence as his group began the hike. Everybody was looking forward to the first five miles — relatively flat, according to their maps, after three days of hills and rocks.

In the silence, Lisa Work said, she noticed the temperature changes as they crossed an open meadow into the shade of the forest.

As the day went on and temperatures soared in the stretches through soybean fields or along the roadside with no protection from the blazing summer sun, Work took turns with fellow hikers pouring cool water from their water bottles onto each other’s heads in a kind of trail baptism.

The 52-year-old, who attends St. John Episcopal Church in York, Pennsylvania, also wants to walk the Camino de Santiago someday. For her, hiking is a form of worship, a necessary rhythm, she said.

“Some of it I don’t have words for, but the experience has been so real,” Work said. “In the Scripture, it talks about the Holy Spirit understanding the groaning of your gut, and I think that’s what this is. It’ll fall short to anybody I try to describe it to.”

It’s different hiking with a group when she’s used to silence and solitude on the trail, she said. But, as she begins a new job heading a school, it has been a reminder how much she needs other people and a chance to unplug and slow down for a week. 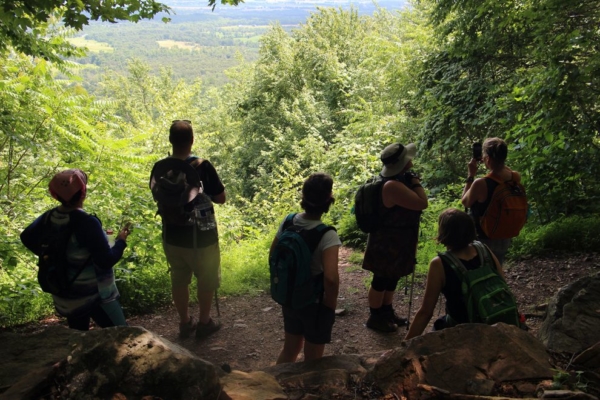 After climbing a ridge, pilgrims stop to rest and enjoy the view on June 26, 2019, Day 4 of the Appalachian Camino. Photo: Emily McFarlan Miller/Religion News Service

Work was surprised to have forged a “sisterhood” with several of the women on the trail, including Amanda Kniepkamp, who joined the Appalachian Camino from Philadelphia, where she attends Philadelphia Episcopal Cathedral.

For Kniepkamp, weekly church services weren’t cutting it anymore. The 40-year-old, who works in academic support at the University of Pennsylvania, said she wanted a deeper experience of her faith.

If there was any place she would find that, Kniepkamp thought, it would be in the outdoors. Having grown up in a small town, she gets “city rage” the way others get road rage, she said.

Remembering church camps she attended growing up, she prayed, “Please let it not be hokey.”

But that hasn’t been her experience on the Appalachian Camino.

She has been moved by the worship in the mornings and evenings. And the intensity of the shared experience of hiking the Appalachian Trail, the joys and the adventure, quickly brought the group together, she said.

“We’ve been together for three days, and we’re sharing everything about our journey,” Kniepkamp said.

That was a theme sounded by several on the Appalachian Camino.

Kay Cramer, 66, walked the Camino de Santiago in Spain several years ago when she retired from her career as a hospice nurse. When she heard about the diocese’s pilgrimage inspired by the Camino, she knew immediately she needed to join.

“Where I was trying to find myself on the Camino, on this one, I’m finding that it’s more about relationships with other people,” Cramer said. “I’m finding love instead of finding myself.”

Others had what could be considered less spiritual reasons for making the pilgrimage — for weight loss or for the challenge of it. Some were hiking along with their children.

At the end of the 12-mile hike on June 25, the pilgrims let out a “Thanks be to God!” as two white support vans came into view.

They piled into the vehicles for the half-hour drive to the Church of the Nativity in Newport, Pennsylvania, a picturesque little church along a river, where they plunged aching and blistered feet into the rushing water.

A trailer arrived carrying their backpacks and other supplies, and some of the pilgrims rolled out sleeping bags in the church’s parish hall. Others set up tents around the stone labyrinth in its neatly manicured lawn.

Then they gathered in the church basement for a homemade dinner prepared for them by parishioners. Cramer, who belongs to the Church of the Nativity, made a Santiago cake, an almond cake on pilgrims’ menus along the Spanish trail.

During a time of reflection afterward led by the bishop in the sanctuary, the pilgrims took turns sharing the highs and lows of the day’s hike.

There were discouraging moments on some of the tougher switchbacks and a fall that cut short the day’s hike for one pilgrim.

There was encouragement from fellow pilgrims and that trail magic at the Darlington Shelter.