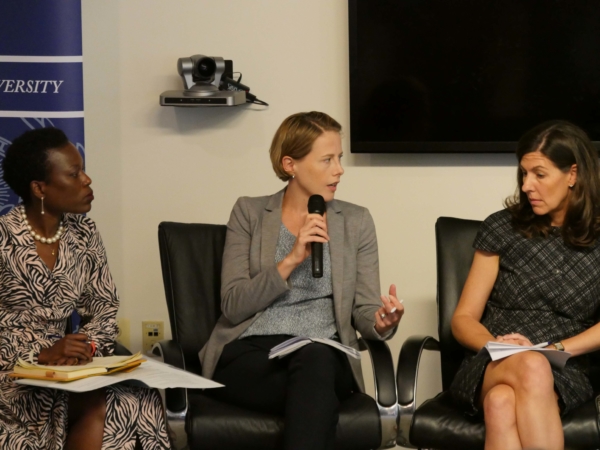 [Episcopal News Service – Washington] At a forum on the involvement of faith communities in the fight against HIV/AIDS, two leaders from The Episcopal Church spoke out about the significant obstacles that remain, despite decades of dramatic progress.

Rebecca Linder Blachly, director of The Episcopal Church’s Office of Government Relations, and Jesse Milan Jr., president and CEO of AIDS United and a former president of the board of the National Episcopal AIDS Coalition, participated in a forum called “Two Possible Futures: Faith Action to End AIDS” at Georgetown University in Washington on Sept. 5.

The two-part panel discussion, hosted by Georgetown’s Berkley Center for Religion, Peace & World Affairs, focused on the role of religious groups at a critical time in the effort to end HIV/AIDS. The global fight against the disease that has killed about 32 million people has made enormous progress since the 1990s, with AIDS-related deaths down more than 50 percent since the peak in 2004, and experts say ending the pandemic is now within reach. However, progress has slowed and infections are increasing in some regions, raising the possibility of a major resurgence in the 2020s.

Religious groups, the panel members said, can make the difference between the two possible futures in the event’s title. By 2030, religious groups could come together and use their moral conviction and deeply engaged networks to end AIDS – or they could fail to do so, and the disease will continue to kill millions of people per year.

In the first panel, titled “Looking Back,” participants discussed how religion helped and hurt the response to AIDS. Milan, who has been living with HIV since the 1980s, said that many churches have historically focused more on ministering to the dead and dying than on prevention.

Because of churches’ past work with AIDS as a terminal illness, Milan said, many religious leaders are not up to speed on recent innovations that address HIV as a sexual health issue.

Milan identified several HIV-related factors which he believes churches failed to address: the agency of women around their sexual health, human rights issues for LGBTQ+ people and health disparities based solely on race.

Milan also pointed out that, because there are “only so many seats at the table” in policy discussions about HIV, someone selected to represent “the faith community” may not be able to speak for the complex array of religious people. And there’s also the problem of decisions being made without the input of people living with HIV, he said.

In the second half of the discussion, “Looking Ahead,” Blachly spoke about some of the most successful aspects of The Episcopal Church’s work to end AIDS. Partnerships with the World Council of Churches, the Anglican Communion, the United Nations and other groups have been very productive, she said. In the future, Blachly hopes to “overcome resistance to partnerships. We know partnerships work,” she told the panel.

Blachly pointed to a generational gap as one of the new challenges in the continuing fight against the disease.

“Young people don’t remember the AIDS crisis,” she said, a point echoed by Milan and others. And there’s a widespread sense that the problem of HIV has essentially been solved, which means it tends to be a lower priority than problems thought to be more pressing, like climate change and human trafficking.

Another panelist, David Barstow, who wrote a book that imagines two possible trajectories in detail – ending AIDS or letting it come roaring back – said that his vision for the winning future includes a coalition of major religious leaders making a public appeal at the 23rd International AIDS Conference in San Francisco in July 2020.

“The pope, the Dalai Lama, Desmond Tutu, Michael Curry,” Barstow said. “The big ones, down the list.”

Panelists were divided on which future they think is more likely, but Blachly was firmly in the optimistic camp, pointing to “historic bipartisan support” in Congress recently.

“We have the tools to do it if we have the political will and support,” she said.