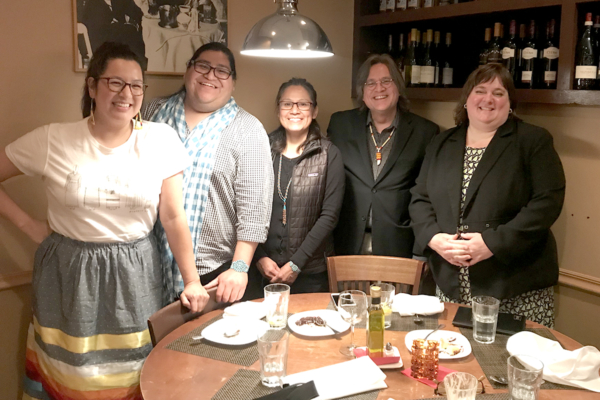 [Episcopal News Service] An Episcopal delegation is wrapping up participation in the annual two-week meeting of the United Nations Permanent Forum on Indigenous Issues, where for the first time an Episcopal delegate was able to speak on the floor of the main gathering.

Ron Braman from the Diocese of Idaho, one of four Episcopalians representing Presiding Bishop Michael Curry at U.N. headquarters in New York, read a statement May 1 that he had drafted with the Rev. Bradley Hauff, Episcopal Church missioner for indigenous ministries, and the rest of the delegation.

“The Episcopal Church counts among its 2 million members many indigenous people from over 50 tribal nations in the United States, Honduras, Ecuador and Colombia,” Braman said in his three-minute speech. He also said The Episcopal Church has been at the forefront of efforts to repudiate the centuries-old Doctrine of Discovery that once was used to oppress indigenous people in the name of spreading Christianity.

“The Episcopal Church is engaged in works of reconciliation with indigenous peoples in the United States and throughout the world,” Braman said, and he noted the growing number of Native-language translations of the Book of Common Prayer.

The purpose of the Permanent Forum is to allow indigenous people to provide expert advice to global leaders through the U.N.’s Economic and Social Council, or ECOSOC, and to inform U.N. agencies working on a variety of international issues, from human rights to the environment.

This year, the 18th meeting of the Permanent Forum was held April 22 to May 3.  The theme was “Traditional knowledge: Generation, transmission and protection.”

The Episcopal Church’s Book of Common Prayer translations are part of global efforts to preserve Native languages, which factor significantly in promotion of traditional knowledge and sustainability of indigenous cultures.

“Words can create and transform reality. Therefore, languages are much more than communication tools; they are tools to transmit culture and history,” U.N. General Assembly President María Fernanda Espinosa Garcés said in her speech on April 22, the Permanent Forum’s opening day. “The indigenous languages are unique knowledge systems to understand the world.”

Lynnaia Main, the Episcopal Church’s representative to the United Nations, called Braman’s speech this week a “historic moment” for The Episcopal Church. As an ECOSOC-accredited nongovernmental organization, the church has submitted statements to the Permanent Forum in 2015, 2016 and 2017, but until now, the Episcopal delegation had not been high enough on the speaker’s list to read its statement directly to the U.N. body. 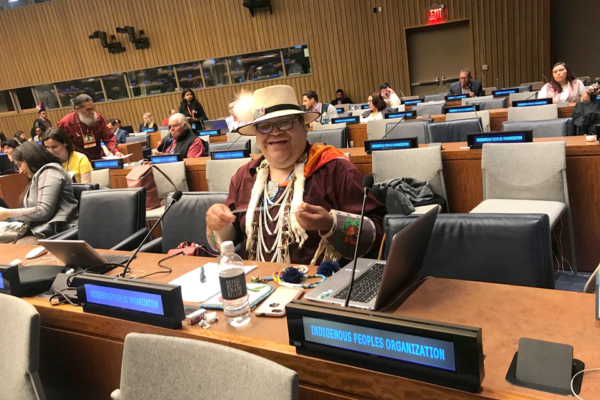 Ron Braman of the Diocese of Idaho attended nearly the full two weeks of the 18th United Nations Permanent Forum on Indigenous Issues. Photo: The Episcopal Church, via Facebook

Hauff, who is Lakota, and Braman, of the Eastern Shoshone tribe, were joined by the Rev. Cornelia Eaton of The Episcopal Church in Navajoland and Melissa Skinner, who is Dakota and an Episcopalian from the Diocese of South Dakota.

Main told the Episcopal News Service in an email that the delegates had a productive time “deepening their knowledge of the interaction between indigenous peoples and the U.N. system” and delving into “the role The Episcopal Church has been playing there since 2012, and brainstorming about various means of representation and advocacy for this year’s forum and beyond.”

Highlights for Skinner included several side events on topics ranging from language revitalization and sacred sites desecration to the effects of deforestation and water pollution on indigenous people.

“One of the most interesting sessions was a group from California, how they felt they were losing their language but worked or are working together to bring it back,” Skinner said by email. “They shared that it’s beneficial & important to start with our children, our babies, as they’re not only our future but they learn quickly, and it’s easier than adults learning what could be a second language.” It reminded her of a school in South Dakota where 3-year-olds are taught the Lakota language.

The Permanent Forum on Indigenous Issues was formed by U.N. resolution in 2000 to focus on indigenous issues related to economic and social development, culture, the environment, education, health and human rights. Its first meeting was held in 2002.

The Episcopal Church has made a deliberate effort in recent decades to welcome Native Episcopalians into fuller participation in the church and to atone for its role in past injustices.   In the 1800s, Episcopal missionaries ministered to American Indian tribes, but conversion to Christianity typically required leaving Native spirituality behind

General Convention resolutions starting at least as far back as the 1970s sought to support Native American land claims and human rights. A 1997 resolution specifically called on the church to “take such steps as necessary to fully recognize and welcome Native Peoples into congregational life.”

And in 2009, General Convention repudiated the Doctrine of Discovery, rooted in a 1493 document that purported to give Christian explorers the right to claim lands they “discovered” and convert the people they encountered.

Today, the church works to “promote love, liberation and the giving of life, as experienced within the Jesus Movement, to the indigenous people of the world,” Hauff said in an emailed statement. “This involves acknowledging, repudiating and taking responsibility for the tragic effects of the Doctrine of Discovery on indigenous people. It entails standing with them in their struggle for justice and including them and hearing their voices in the corridors of influence within the church and the world.

“Our work at the United Nations, particularly at the Permanent Forum on Indigenous Issues, is a necessary and important part of that.”