[Episcopal News Service] A seven-member delegation of Episcopalians from Native tribes across the U.S. represented Presiding Bishop Michael Curry in New York this week during the opening days of the annual meeting of the United Nations Permanent Forum on Indigenous Issues. 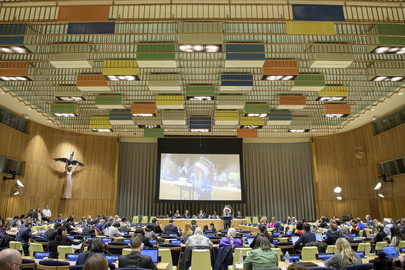 The purpose of the Permanent Forum is to allow indigenous people to provide expert advice to global leaders through the U.N.’s Economic and Social Council, or ECOSOC, and to inform U.N. agencies working on a variety of international issues, from human rights to the environment. As an ECOSOC-accredited non-governmental organization, the Episcopal Church has a powerful perspective to present in those discussions, Hauff said.

“I hope it’s an indicator to people that we as a church, those of us who are indigenous and who are not, we want to own up to what has happened historically, and we do want to be instruments of justice and restitution, equity and reconciliation,” Hauff told Episcopal News Service on April 18, the third day of the conference. “We really see that as the church’s role, and we want to be a part of it.”

The church history that Hauff referred to is one of close ties to early American colonialism and the oppression of Native people in North America through much of the last 500 years. Episcopal missionaries ministered to American Indian tribes, but conversion to Christianity typically required leaving Native spirituality behind.

The Episcopal Church has made a deliberate effort in recent decades to atone for its role in past injustices and to welcome Native Episcopalians into fuller participate in the church. General Convention resolutions starting at least as far back as the 1970s sought to support Native American land claims and human rights. A 1997 resolution specifically called on the church to “take such steps as necessary to fully recognize and welcome Native Peoples into congregation life.”

And in 2009, General Convention repudiated the Doctrine of Discovery, rooted in a 1493 document that purported to give Christian explorers the right to claim lands they “discovered” and convert the people they encountered. The General Convention resolution described the doctrine as “fundamentally opposed to the Gospel of Jesus Christ” and pledged to support the United Nations Declaration on the Rights of Indigenous Peoples.

The Permanent Forum on Indigenous Issues was formed by U.N. resolution in 2000 to focus on indigenous issues related to economic and social development, culture, the environment, education, health and human rights. Its first meeting was held in 2002.

This year, the 17th meeting of the Permanent Forum is being held April 16 to 27 at U.N. headquarters in New York. The theme is “Indigenous people’s collective rights to lands, territories and resources.”

Indigenous people risk falling short of the U.N.’s Sustainable Development Goals “as long as our rights over our lands, territories and resources are not recognized,” Chairwoman Mariam Wallet Aboubakrine of Mali said in her opening remarks April 16. “In the same way, the world risks losing the fight against climate change and the destruction of the environment.

The Doctrine of Discovery was among the topics of discussion in the first days of the session, Hauff said, as were treaty violations, misuse of natural resources and substance abuse. He said he was struck by the similarities between the concerns of indigenous cultures around the world and those in the U.S. and the Episcopal Church.

One member of the Episcopal delegation, Ronald Braman of Idaho, a member of the Eastern Shoshone tribe, sat on a panel discussion on the Doctrine of Discovery, and the Rev. Brandon Mauai, from the Standing Rock Sioux Reservation in South Dakota, spent part of April 18 attending a presentation about the federal response to Standing Rock’s 2017 standoff in opposition to an oil pipeline across the Missouri River.

Mauai, through “his work with the tribal council there, as well as the church, has a direct link to a number of the issues being discussed here at the forum,” Hauff said.

Although the Episcopal delegation is only participating in the Permanent Forum session through April 19, delegates have plenty of experiences, information and lessons to bring back to their home communities. In one memorable episode, an indigenous woman from Latin America spotted the Rev. Michael Sells, a deacon from Navajoland Area Mission, and her attention appeared to be drawn to his clergy collar.

“She pointed at him and said, ‘colonista,’” Hauff recalled, or “colonialist” – a present-day reminder of the church’s past association with colonial powers.

“We had a conversation about that in our group, what that experience meant,” Hauff said. Sells, who is part Navajo and part Athabaskan, acknowledged it was a powerful, uncomfortable moment, “but it was important for him to experience it, based on our history.”