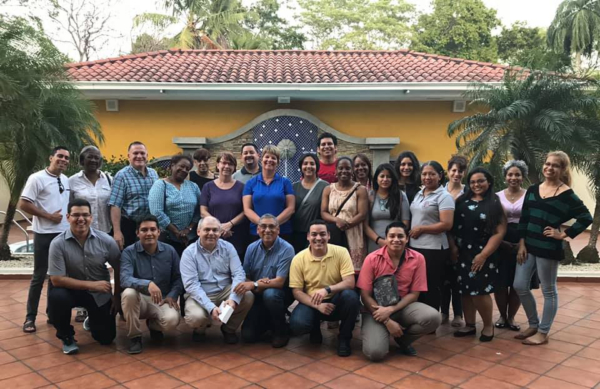 Members of the team planning Evento de Jóvenes Episcopales, or EJE, pose for a photo in March during meetings in Panama, where the event will be held in July. Photo: Anthony Guillén, via Facebook

[Episcopal News Service] The Episcopal Church is gearing up for a two-day event in Latin America for teenagers and young adults who are leaders in their Episcopal faith communities, with a deliberate focus on young people from the church’s Province IX.

Evento de Jóvenes Episcopales, or EJE, will be held in July in Panama City, Panama, and is styled after the popular Episcopal Youth Event meetings, which are held in different locations around The Episcopal Church every three years. While the church’s triennial EYE gatherings typically draw more than 1,000 participants, the inaugural EJE is preparing to welcome about 250 people, including organizers, volunteers and delegations from each of the seven Province IX dioceses, as well as Anglican youth leaders from several additional Latin American countries.

“This has been a dream for many years,” Glenda McQueen, The Episcopal Church’s global partnerships officer for Latin America and the Caribbean, told Episcopal News Service. Young people from Province IX often find it difficult to travel to the mainland United States for EYE, where English is the primary language spoken, said McQueen, who is based in Panama.

EJE “will give an opportunity for youth and young adults from this area to be present and to be able to speak in Spanish and communicate and sing in Spanish, praise God in Spanish, their own language,” she said.

Several departments of The Episcopal Church are collaborating on the project, including Faith Formation, Ethnic Ministries and Global Partnerships, and they are working closely with the EJE19 Planning Team from Province IX.

“We’re training folks to do this so that in the future – and we hope soon – the next event will be led by Province IX,” the Rev. Anthony Guillén told ENS in an interview. Guillén is The Episcopal Church’s director of Ethnic Ministries and missioner for Latino and Hispanic Ministries.

The Episcopal Church’s Province IX encompasses dioceses in the U.S. territory of Puerto Rico and the Dominican Republic in the Caribbean, and the Central and South American countries of Colombia, Honduras, Venezuela and Ecuador, which is split into the dioceses of Central Ecuador and Litoral Ecuador. The Diocese of Cuba, after being welcomed back into The Episcopal Church at General Convention in 2018, also has been invited to send a delegation to EJE19, though Cuba is joining Province II, not Province IX.

Most Episcopalians in these dioceses and their congregations speak Spanish as their primarily language, which Guillén said is one reason that Province IX has historically been overlooked by the primarily English-speaking Episcopal Church.

“It never really thought about how to be responsive to Province IX,” Guillén said, but in recent years Episcopal leaders have rekindled hope for bridging that geographic, cultural and linguistic divide through events like EJE19. The Executive Council, too, has pledged to hold a meeting in each of the church’s nine provinces during this triennium, including in one of the Province IX dioceses. “There’s attempt to go and do things in Province IX,” Guillén said.

Planning for EJE19 has been underway for several years, and in 2018, General Convention approved $350,000 for the event. It will be held at Ciudad de Saber, a former U.S. military base in Panama City that has been converted to an entrepreneurial hub and conference facility, with theaters, auditoriums, classrooms and dormitory-style lodging for EJE19 participants. Presiding Bishop Michael Curry is scheduled to attend.

“EJE19 will be an incredible gathering of young people to learn about and claim their place as members of the Jesus Movement,” Curry said in a press release about the event.

Although Panama is part of the Iglesia Anglicana de la Region Central de America, commonly known as IARCA, and not part of The Episcopal Church, the Province IX planning team for EJE19 chose this Central American country as the ideal location because of its close proximity to the region’s Episcopal dioceses and the low travel costs.

A detailed schedule hasn’t yet been finalized, but Wendy Karr Johnson, The Episcopal Church’s officer for Faith Formation, said the two-day event will feature a full lineup of worship, workshops and outings, similar to what is offered at EYE.

Panama Bishop Julio Murray has been generous in supporting the planning of EJE in his diocese, Johnson said. He is expected to speak to participants about the historical and spiritual context of the host city: “Why is this location speaking to us, and what does it have to teach us?” Johnson said.

EJE19 is intended for young people ages 16 to 26. The participating Episcopal dioceses were invited to send delegations of up to 15 people, with up to 13 youths paired with two adult chaperones.

The post EJE19 to bring young Episcopalians from Spanish-speaking dioceses together in Panama appeared first on Episcopal News Service.