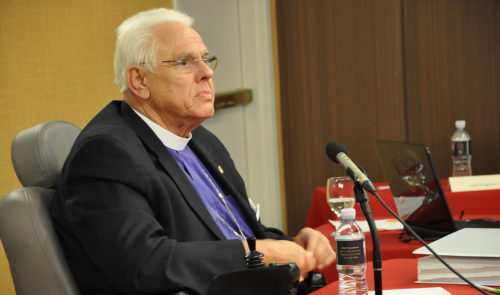 The Court of Review for Bishops said it made the three-year suspension retroactive to Aug. 2, 2017, the day a hearing panel originally recommended the sentence, rather than with the court’s Jan. 31 order.

The case against Bruno involved his unsuccessful 2015 attempt to sell the property of what was then known as St. James the Great’s in Newport Beach, California, to a condominium developer for $15 million in cash. That effort prompted some St. James members to bring misconduct allegations against Bruno, alleging he violated church law.

The hearing panel conducted three days of testimony on those allegations in March 2017. Bruno subsequently attempted to sell the property as the panel considered how to rule on the case. That attempt earned Bruno two ministerial restrictions from Presiding Bishop Michael Curry.

The court said in its order it found that “the majority of the factual determinations of the hearing panel are supported by substantial evidence when viewed as a whole in light of the record on appeal.” It added that the hearing panel “did not erroneously interpret or apply the Constitution and Canons of The Episcopal Church, nor did it commit a procedural error” or engage in a decision-making process that was contrary to the church’s Title IV canons on clergy discipline.

“We believe the decision reached in the Bishop Bruno matter is just, but no cause for celebration in any quarter,” Maine Bishop Stephen Lane, court president, said in a press release. “We hope the decision brings clarity to the canonical requirements by which we govern ourselves, will promote healing and reconciliation, and will be helpful to dioceses and bishops in their ministries.”

In its order the court said that, as bishops, they are “sympathetic to the fact that Bishops Diocesan are on the front line, with many irons in the fire, juggling numerous decisions on a daily basis for the overall benefit of their Diocese. It is not an easy job.” The bishops said they had  a “formidable task” in passing judgment on a bishop “who has devoted years of his life to the church.”

However, the bishops said that Bruno did not claim he was wrongly found to have taken certain actions but, instead, focused on technicalities to get his sentence set aside. “This is contrary to the canons, which are supposed to focus on justice and reconciliation,” the order said.

Bruno retired from the Diocese of Los Angeles at the end of November 2017, after serving as bishop diocesan since Feb. 1, 2002. Episcopal Church bishops retain their episcopal order after retirement. He was succeeded by Bishop John Taylor. Meanwhile, the St. James congregation returned to its church on April 8, 2018, after being barred from worshipping there for nearly three years because of the dispute.

The Court of Review met in Atlanta, Georgia, in late September to hear oral arguments by the parties. The court’s decision was crafted over the next eight weeks, and the members of the court reviewed the decision and signed off over the weeks since Christmas, according to the release.

Previous ENS coverage of the case is here.